REVIEW: The Season by Sarah Maclean 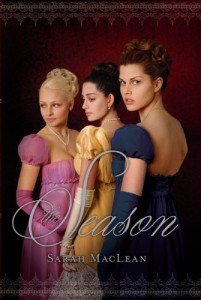 I can’t remember where I first heard about your debut novel.   All I know was that the idea of a group of female friends navigating through London’s Season to solve mysteries and intrigue made me very excited, so I asked Jane if she could find a way to get me a copy.   And because she’s just that awesome, she did.

Seventeen-year-old Alexandra Stafford has absolutely no desire to marry.   Fiercely independent and intelligent, she finds most men dull and believes they all want idiots for wives.   But as the only Stafford daughter, her mother’s been anticipating Alex’s Season for years and intends to ensure that Alex make an appropriate match.

Thankfully, Alex won’t be alone.   With her childhood friends, Vivi and Ella, by her side, she’ll be able to endure the balls.   However, as the weeks pass, she finds herself growing increasingly attracted to her childhood friend, Gavin Sewell, the newly-made Earl of Blackmoor, and doesn’t quite know what to do about it.     For most of her life, she’s viewed him as a fourth brother and the shift in their relationship leaves her unbalanced.   But then she stumbles upon a plot involving the mysterious death of Gavin’s father, which had previously been deemed an accident, and that’s when things get interesting.

First off, I’d like to say I adored the dialogue in this book.   The quips and witty banter between the characters were delightful.   I also loved the fact that this was a book where female friendship was celebrated.   So many books set in this time period feature rivalries and manipulations as women angle for matches, but you sidestep that well-worn path here.   It would have been very easy to take that road, especially with the opportunity presented by Penelope and her intentions towards Gavin, given her history with the girls.   Instead, we have Alex, Vivi and Ella, none of whom are satisfied with their expected roles in society and yearn for something more — Alex who doesn’t want to marry if it means she has to become a useless twit, Ella who wants to be an author, and Vivi who — scandal of scandals! — wants to marry for love.   It was refreshing.

I also adored the relationship between Alex and Gavin.   Theirs was obviously one born out of affection and trust.   It was wonderful to watch their growing attraction to one another.   I thought the way their heightened awareness made them awkward in each other’s company was very realistic.

On the downside, I thought the main plot about the circumstances surrounding the death of Gavin’s death started a bit late in the book.   It’s always present since we were given brief scenes from the murderer’s point of view, but it seemed like Alex and company got involved halfway through the book.   I also thought the identity of the murderer was obvious so I wasn’t kept in much suspense.

The Season is a very quick and pleasant read.   Unfortunately, the fact that the main action doesn’t really start until it’s halfway complete lessened my enjoyment.   I’m not sure if this is the first in a series but I admit I’m be interested in reading more about Vivi, Ella, and oddly enough, Lord Stanhope.   I confess to have a secret weakness for rakes that are really just frauds and whose reputations far outstrip the reality.   B-

→ Jia
Previous article: Why Amazon Was Wrong to Back Down from Authors’ Guild
Next Post: Essay: Why I Read by Keishon