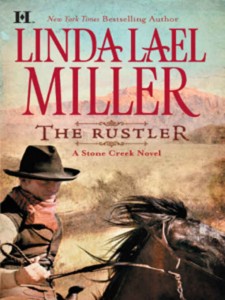 I confess that the last book I read of yours was Never Look Back published in 2004. I really liked that book (the heroine sounded like a real lawyer) but for some reason, I never read the two sequels. I think it had something to do with the fact that between 2004 and the sequel’s release in 2006, I kind of forgot about the series.   I did think about picking another one of your books, Deadly Gamble, but the heroine’s name “Mojo Sheepshanks” was a bit too quirky for me (plus she talked to dead people).   Over the years, I’ve seen how successful your McKettrick series has been and I kept telling myself to pick up one of those books but was afraid for some reason.   No longer, though, because after the Rustler, I’m definitely thinking I have to read more Miller.   Maybe even some stories about Mojo Sheepshanks.

The Rustler is not a perfect book for me but what appealed to me was the old fashioned sensibility. Wyatt Yarbro almost dies in a cattle rustling endeavor and decides to take up his brother’s offer to come to Stone Creek.   It’s not like Wyatt has alot of choices in his life. He’s got no income other than what he steals; no companions other than other outlaws.   Stone Creek might offer other solutions.   When Wyatt arrives, however, his brother, Sheriff of Stone Creek, and another resident, a Marshall, are called away to gather up some criminals.   Wyatt is deputized and entrusted with the reins of the town.   Upon first laying eyes on Sarah Tamlin, an older spinster (27) and daughter of the town banker, Wyatt becomes fixated on making Sarah part of his settling down.

Sarah has been running the bank in Stone Creek because of her father’s on again, off again dementia.   She made a few bad loans and used her family funds to cover the bank.   None of the shareholders realize that she is covering for her father and she lives in constant fear that her lies will be found out and that her and her father’s source of income will be taken away from her.   She particularly fears the influence of Charles Longstreet, one of the major shareholders in the bank.   She’s attracted to Wyatt but her attraction is tempered by his former outlaw status and her many, many secrets.

For an outlaw, Wyatt was almost too perfect, saying the right things such as gently telling a gossip that she is no friend of Sarah’s to doing the right thing such as adopting a dog that was whipped and left for dead.   There is no character arc for Wyatt.   He immediately wants to marry Sarah. He’s already good. To some extent, because of his utter divineness, the story lacked movement.    He’s seriously the most honest outlaw ever and this presents a problem because when Sarah has her doubts about his trustworthiness, the reader feels frustrated.   The reader has only been privvy to his goodness and honesty and therefore Sarah’s doubts seem unreal.

Sarah’s story is much more interesting because her past is as checkered as Wyatts. I appreciated that Sarah wasn’t always a good banker, making unwise decisions.   I liked that she made terrible decisions in her past, that she wasn’t always the perfect heroine archetype.   She was devoted to her father and you could see why given his refusal to judge poorly.   He sheltered and protected her.

Much of the story is told from Wyatt’s point of view which is one of plain speaking and simplicity.   His narrative really lent that Old West feeling to the story.   That and the fact that everyone had a hard luck story (even the dog).   For fans with a little yen for nostalgia and for those who like westerns, The Rustler is an entertaining story.   Both Sarah and Wyatt are very likeable and if things worked out just right for everyone, including the town whore, the reformed drunk, and the dementia suffering father, well, it is a romance.   B-

→ Jane
Previous article: REVIEW: Yours in Haste by Roberta Major and Sarah Olds
Next Post: Are Big Advances Killing the Publishing Industry?