REVIEW: The Rest of Our Lives by Dan Stone 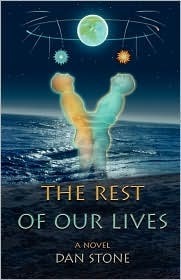 Colm McKenna has led a guarded life. Gifted with a wintry soul and a photographer’s eye, he can stop time as easily as he freezes water, or call down cold north winds. He thinks he is alone and unique in the world. Then, seemingly by accident, he meets handsome writer Aidan Gallagher, his opposite, a fiery young man who quickens Colm’s heart.

In this lighthearted, gay romantic fantasy, can two male witches whose passion reincarnates century after century, find a way to express their love for each other again? Can this enchanting pair finally succeed after so many lifetimes?

A 2010 finalist for the Lambda Literary Award for Best Gay Romance!

I found your book for the first time back in early 2010, when I was browsing the LAMBDA award finalist selections, and I was so very pleased with what I found. By that time I had been reading m/m gay romance for two or three years, but I think this was the first story I had read where the protagonists did not struggle with being gay, or with coming out as gay – and I really liked it. If nothing else, it was a refreshing change in my reading. I think, although I am not hundred percent positive, that this was also my first gay romance which dealt with a reincarnation trope.

A few months ago I noticed that sequel to this story was out and of course I bought it, but I wanted to reread this book first. It took me some time to actually get to it because I was worried about one of my favorites not standing the test of time.

For the most part the book fared pretty well. The reincarnation trope may not feel as fresh as when I read it six years ago, but I still liked the execution and I still enjoyed the characters. Yes, it is a light-hearted read, but I thought and still think that it has a lot of heart.

As the blurb tells you, Colm has interesting powers (yes, similar to those that Piper from TV show “Charmed“ had – and he even comments on similarity, I found the ping back to the show amusing), but he thinks that he is the only person in the whole world who has strange powers. Until he meets Aidan, who also has strange powers which are the opposite of Colm’s. Aidan’s power is fire, and he can do all kinds of things with it. Aidan is full of restless energy, he burns through days and activities both literally and metaphorically. After an odd meeting Colm runs away from Aidan, but of course they meet again very soon. Colm learns that while his powers are strong, much stronger than he thought they were, Colm is not that unique. He is a male witch and there are many such witches in the world. He also learns that he and Aidan met many times throughout the ages, as both men and women, and as they learn about their past lives, both men realize that fate/karma whatever you want to call it has given them another chance to earn a happy ending they were unable to earn before.

Colm at first is completely clueless about his heritage to the point that he does not even realize that the word “witch” refers to him.

“Don’t try to tell me you didn’t know. What else could it be?”

“Well as long as we’re suspending disbelief, lots of possibilities come to mind. A visitor from another fast planet? A mutant?”

He balled up a napkin and threw at me. “Yeah, that’s it. We’re the X-men who love Men.”

Apparently when a witch’s mother dies, the child is usually left in the hands of an aunt who explains everything, but Colm’s aunt turned out to be Baptist and she did not explain much to him – he did not have very happy childhood, so Aidan and his aunt teach him stuff. In the context of the reincarnation trope it made sense to me that after their initial confusion they started dating very fast – their souls recognized each other, etc. There is not much if any angst in this story, but I thought the way their mandatory separation was handled was interesting. Usually I do not like this reason for separation at all, but once again, in the context of what happened to them before it made complete sense to me.

Note that while we have witches with fantastic powers in this book, there was no other overarching fantasy plot, so I guess this is a romance with fantasy elements. Just do not get this book if you want fantasy with the romance in the background.

I liked the humorous moments in the narrative. Here we have a scene where Aidan’s aunt has the guys over to try and help their souls go back in time, so that they can observe and get reacquainted with some of their past lives.