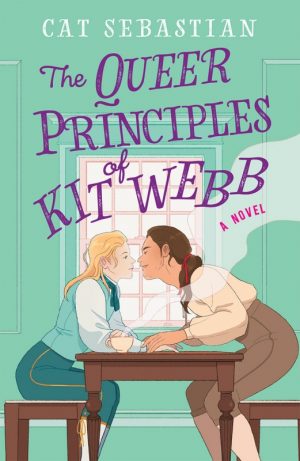 Critically acclaimed author Cat Sebastian makes her trade paperback debut in a stunning historical romance about a reluctantly reformed highwayman and the aristocrat who threatens to steal his heart.

Kit Webb has left his stand-and-deliver days behind him. But dreary days at his coffee shop have begun to make him pine for the heady rush of thievery. When a handsome yet arrogant aristocrat storms into his shop, Kit quickly realizes he may be unable to deny whatever this highborn man desires.

In order to save himself and a beloved friend, Percy, Lord Holland must go against every gentlemanly behavior he holds dear to gain what he needs most: a book that once belonged to his mother, a book his father never lets out of his sight and could be Percy’s savior. More comfortable in silk-filled ballrooms than coffee shops frequented by criminals, his attempts to hire the roughly hewn highwayman, formerly known as Gladhand Jack, proves equal parts frustrating and electrifying.

Kit refuses to participate in the robbery but agrees to teach Percy how to do the deed. Percy knows he has little choice but to submit and as the lessons in thievery begin, he discovers thievery isn’t the only crime he’s desperate to commit with Kit.

But when their careful plan goes dangerously wrong and shocking revelations threaten to tear them apart, can these stolen hearts withstand the impediments in their path?

There is no doubt in my mind that when I see the name of Cat Sebastian on the cover of the book I can expect a well written story and this book was no exception. I thought the writing was truly lovely (always with the disclaimer – as much as I as ESL speaker could judge it anyway).

Here is a small sample of the writing. Percy of course says that relatively early in the book:

“My dear girl, if I meant to blackmail Mr. Webb, I’d start with his life of crime, not his amorous predilections, which I happen to share, for that matter.” “I don’t do that,” Kit protested, then wanted to bang his head into the wall. Both Betty and Holland knew that Kit had been looking, and protesting about it just made him look deluded. And now they were both staring at him. “Get changed,” Kit grumbled. “And be quick about it.” He tried not to watch as Holland walked out of the room. “Amorous predilections?”

Betty asked. “Is he just talking about fucking men or some fancy shite I don’t want to know about?” “Shut up, you,” he told Betty. “Is that what you’re doing back there? Predilecting?” She waggled her eyebrows. “Betty!” “You should try. Do you a world of good.” He didn’t go into the back room until fifteen minutes had passed, both because he didn’t want to risk seeing Holland half-dressed and because he wanted to make Holland wait.”

The blurb really is great in my opinion it gives you a detailed set up and at the same time does not reveal a big spoiler – why does Percy need that darn book so much that he was ready to rob his own father . Because *it is * a big spoiler and you should find out for yourself.

I said in the previous paragraph that the book was well written. My main problem is I think that I don’t think that it was well constructed, or to be more specific I don’t think that the action /adventure storyline was well constructed. I am sure I mentioned it in my previous reviews, but I want to say it again – as much as I love love romance in my books I prefer that there would be something else fun, interesting, dangerous for the men to do while falling in love. And sure the writer provides a future robbery for our main couple to occupy themselves with while at the same time getting to know each other and falling in love with each other.

Basically I thought it was good enough for the development of the romance, but not good enough on its own if it makes sense. I thought the pacing was off (several times I wondered why the guys did not get on with what they were planning already), at least once I thought the sex (as lovely as it was written ) was inserted when it made no sense to me. When the high point of action/adventure came, I still was not satisfied, because there was no pay off to me. It’s hard to talk without spoilers, but I am done with the book and I still have no clue what was the motivation of the very important secondary character. I mean I read at the very end that the character would have their own story, but sorry, this person was involved in the robbery, it ended in this book, felt like a sequel bait to me.

Again, don’t get me wrong though, more often than not I very much enjoyed Kit and Percy preparing for the robbery and having some fun in the process and realizing slowly but surely that they are getting very fond of each other.

One last thing – as much as I could judge, the characters did not really feel like people from the 18 century, but they were fun.