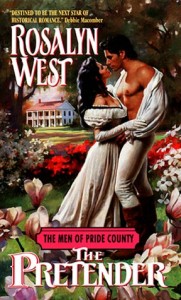 While poking around among the drafts for “Reviews I’ve Just Never Got Around To” I discovered that I’d neglected to write a letter for the last book in your Men of Pride County series. It’s a major oversight on my part and one for which I apologize. If ever a series deserved full measure, it’s this one and “The Pretender” is a fine wrap up to it.

Deacon Sinclair was a Confederate spy during the recently ended Civil War. While on a mission, he met and fell in love with Garnet Davis, daughter of a Union officer. Forced by circumstances to choose between the woman he knew was The One for him and his duty to his country, he chose country. The decision was agonizing when he made it and even more brutal to him when he returns to her house to find it in ruins and she no where to be found.

Now it’s some years later and Pride County Kentucky is suffering for her support of the South during the war. Well, just everyone in the South is when it comes down to it. Deacon’s sister married a local man who fought for the Union so they’re doing okay but Deacon and his mother face eviction from their plantation when the mortgage is sold out from under them. Imagine his surprise, and chagrin, when the new owner turns out to be Garnet Davis. And Garnet’s out for some revenge.

She’s never forgotten the man she loved who happens to be the man she still loves. And she’s got a memento of their time together in the person of their young son. But she’s not going to let Deacon back into her life easily. He hurt her and she’s still not sure if she can handle having him in her life from now on or if he deserves to know about their son.

She makes him an offer to work for her and earn his land back – something that Deacon, who was raised to inherit the plantation, finds deeply humiliating. But with Garnet’s money, he finds that he can afford to buy the supplies needed to rebuild the house even if he’s appalled by the people he has to deal with in order to get them. Yep, it’s post war times folks and deals with the devil are being made all over the place.

Will these two be able to overcome the real conflict between them? Can the people of Pride County finally put the anger and divisions of the war behind them and move towards rebuilding new lives from the ashes of their old ones? Or will the work of Reconstruction in the county be doomed to failure by those who can’t or won’t stand to see change come?

The conflict in this book is real and not something that just needs a
five minute conversation between Deacon and Garnet to straighten out. Garnet took Deacon’s betrayal to heart and her actions cut to his pride as a man. Both hero and heroine are strong people. And both have good and bad aspects to their characters. I think that you again portray the times well and show more of the people and county trying to lift themselves out of the postwar mess the South must have been.

The secondary characters are well defined and have a purpose in the story and plot besides just taking up space. The man who controls the county is Tyler Fairfax, a character I just love to hate. Tyler’s one of those men who thrive in the aftermath of chaos. Though from one of the leading families of the county, Tyler’s life hasn’t been easy as was shown in “The Outsider,” book two of the series and which featured Tyler’s sister Starla.

There are a few problems that keep me from giving this one an A. I’d have liked to see Garnet realize and come to terms with the unsavory characters with whom she did some business and to have the issues with the sharecroppers resolved. And what about Christien, Starla’s son who looks to be headed to hell in a handcart from his Uncle Tyler’s influence? For once I’d have liked to see more of the secondary characters from the previous books especially Noble Banning and Julia (who wasn’t in the book at all). Perhaps you planned to deal with all this in the last (and never published book). The ending is a bit rushed and the character of Monty is quickly dealt with. And the waste of the great villain you had built up over four books is truly a shame. Those Avon bastards should be shot. I end up giving this one a B+ and sigh for that last book.