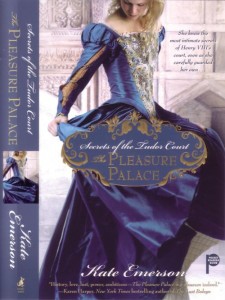 Your mysteries and historicals have been among the books I’ve pondered buying from Belgrave House. But, as with many books out there, I’ve never gone beyond the, “hmmm, that could be interesting” stage. So it was with pleasure – yes, I’m being bad here – that I picked “The Pleasure Palace” out of the box of books Jane sent me recently.

Jane Popyncourt didn’t know why her mother suddenly left her position at the French Court of Charles VIII and whisked them both off to England. Taken on as a ward by Henry VII, she had just begun to settle into her new position in the Royal nursery with the Princesses Margaret and Mary Tudor, when her uncle brought her the news of her mother’s sudden death.

Now years have passed and Jane unexpectedly discovers someone she once knew in France among the prisoners being held for ransom in England after the “Battle of the Spurs.” Guy Dunois was her childhood friend and sparks in Jane a desire to find out what really happened all those years ago. His aristocratic half-brother, the Duc de Longueville, sparks something different in Jane. Their liaison creates hostility towards Jane at Court, while her questions regarding her past might just cost her her life.

As I said in a recent review about a book set at the court of Versailles, it takes a skillful author to use known historical personages in a story and keep my interest. The fact that you have used a real person as your heroine and managed to create a story that fits the characters’ actions into known history and developed a “what might have been” to explain them is fantastic.

It’s obvious that you know the period well and have written about it often which helps avoid overloading the story with too much detail where the storyline can’t support it. I did feel that some of the information was a touch awkwardly inserted unless the book is meant to be read as Jane’s declaration to us, the 21st century readers, instead of just her memoirs. Why would she explain certain things, like the rules to their card games or the game of bowls, if she thought her audience would be contemporaries? And I can’t believe that she could live in Royal palaces for years and not know that the candle stubs were collected each morning.

I like the descriptions of the Tudors and their Court. Certainly there are some nice things about being there but, for me, there’s altogether too much toadying and kowtowing to anyone of higher rank than you in order to get anywhere. Such a world of petty jealousy and back stabbing.

The delicate way that the courtiers had to handle royalty was amusing and I wryly noticed that this is an art Jane had already perfected by the age of ten. Just enough schmoozing, enough deference, enough of making them think an idea was theirs then you subtly slide in your request and hold your breath. It makes me glad of my quiet little life away from the movers and shakers of the world.

The descriptions of clothes and decorations was extensive, which was nice for a while, but then I got slightly bored with the point by point rundown on what every character was wearing plus jewelry. I know this was an important part of life then when one had to dress to be seen and noticed but it did make the book drag in places. But I laughed when poor Jane was stuck in her new rooms with no maid to hook, pin, tie and truss her into her clothes so she could go eat something.

Least we envy the life of a royal Princess, there’s enough detail about how little say they had over their lives to quickly cure me of any dress and gewgaw lust. I had to laugh at Mistress Strangeway’s wry observation that she was glad she wasn’t close enough to the Court’s yearly progress that she’d have to pony up room to house the excess courtiers. It must have taken a few years to recover from the “honor” of hosting the King, even if only for a few days.

Jane’s relationship with Duc felt realistic for an era when 1) men scratched their itches more publicly, 2) important men felt they were doing you an honor by allowing you to scratch their itches and 3) they were ready to toss you at a moment’s notice when something else nicer came along. Then there’s poor Guy, having to watch this woman he obviously still cared for, even if he didn’t yet love her or realize that he already loved her, bed his legitimate half brother.

The ending of the book and the resolution of Jane’s legal suit in France seemed a little rushed. There was little suspense about how it would all work out, though I did enjoy her bait and switch tactics during her interview with Francois. There’s a lifetime at court for you.

One would hope that Jane managed to retain some of her English childhood friendships once she had resettled in France. From your author’s note, I see that she did keep up some kind of correspondence with Mary Tudor. Thanks for the inclusion of a “who’s who.” It’s a nice refresher or intro – depending on a reader’s previous knowledge. One thing that struck me anew, and has annoyed me in the past, is how little is known about the women. Often we don’t even have the year of their birth or death. Were they of such little importance to their families that even these significant details were never recorded? It’s something I had noticed while reading the “Uppity Women” series years ago.

The mystery of why Jane and her mother fled to England and then why Jane received her place at court make sense given the uncertainty of the times and lack of power women had. Jeanne could have attempted to stick around Amboise and trust that the truth would be believed but were I in her place, I would have been on the first boat across the Channel too. Again, it also speaks to your skill as an author to have invented the tale which neatly fits into the facts of the period.

I would imagine that in the end, Jane was glad to be spared the flip-flopping needed to survive the later part of Henry VIII’s reign especially given that she wasn’t BBF with Catherine of Aragon. Did Will Compton get an annual wage for being Master of Pimpage?

Huzzah to you and Pocket Books for giving us something other than yet another Regency – or increasingly Victorian – set novel. I used to read tons of books set in the Tudor era and am delighted to revisit old reading haunts. I also appreciate the chance to give one of your books a try and now just have to pick up some of your other ebooks though who knows when I’ll actually get a chance to read them. B for “The Pleasure Palace.”