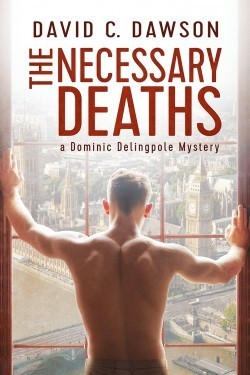 The Delingpole Mysteries: Book One A young journalism student lies unconscious in a hospital bed in Brighton, England. His life hangs in the balance after a drug overdose. But was it attempted suicide or attempted murder? The student’s mother persuades British lawyer Dominic Delingpole to investigate, and Dominic enlists the aid of his outspoken opera singer partner, Jonathan McFadden. The student’s boyfriend discovers compromising photographs hidden in his lover’s room. The photographs not only feature senior politicians and business chiefs, but the young journalist himself. Is he being blackmailed, or is he the blackmailer? As Dominic and Jonathan investigate further, their lives are threatened and three people are murdered. They uncover a conspiracy that reaches into the highest levels of government and powerful corporations. The people behind it are ruthless, and no one can be trusted. The bond between Dominic and Jonathan deepens as they struggle not only for answers, but for their very survival.

Review:
Dear David C. Dawson,
Your book was languishing in my TBR list almost for a year now till I saw the second book coming out and deciding to read the first one.
Readers please beware, this is NOT a romance, this is a gay mystery with romantic elements and if you decide to try this one I suggest adjusting your expectations accordingly.
The blurb describes the set up quite well. Dominic gets involved in the case initially by accident, when he observes his neighbor losing consciousness after she receives news about her son being in the hospital after the suicide attempt.
Dominic decides to drive her to Brighton since he feels bad for her and feels a little bit conflicted about what to do if she would ask for free legal advice. He also decides that this is a good chance to visit his lover Jonathan, with whom they had been together for couple of years, even though they were not living together.
Once Dominic and Samantha get to Brighton and Samantha gets to visit her son’s bedside, the events starts to unfold really fast. Somebody is trying to kill Simon while he is still in coma, Dominic and Jonathan also get involved once again initially at least partially by chance, but then they decide to get involved in the investigation.
Samantha was convinced from the beginning that something was wrong. She was persistent that Simon did not do drugs and he was not in the state of mind to try suicide. Now it is pretty clear that it was not a suicide, but a murder attempt. What is less clear, however, is who is behind all of these events.
Dominic and Jonathan initially get involved in the investigation because Samantha asked Dominic for advice after all (not a free one.) However very soon Dominic finds several other reasons to stay involved. I was okay with all those reasons, although I rolled my eyes at how fast Dominic decided to not inform the police about several important things they discovered. I may have mentioned it before that when I start a book about a private sleuth I expect to do a certain suspension of disbelief as to how and why the guy would start the investigation and why he would be the main investigator instead of law enforcement. I however expect the author to help me out some and in this story I just did not think that he did do that much. Dominic is a lawyer for crying out loud and I expected better from him.
Even though the overall suspense/mystery plot felt very over the top to me, I liked it.  It was fast moving and entertaining. There were several chapters closer to the end that I was reading very fast, because I was anxious to see how it will all get resolved and to me the resolution was satisfying enough.
Now, let me talk about the romantic storyline. As I said the story is not a romance, but it has a romantic couple and I think it is fair to talk about it.
Dominic and Jonathan are in an open relationship and I want to stress that I am an odd romance reader in that regard. I am more than happy to have a gay couple in a loving open relationship in my romance. (Obviously it is not my place to approve or disapprove of any real life relationships, I am only talking about fictional open relationship here).  And this is not even a romance, this is a gay mystery with romantic elements. So I feel like gay couple in an open relationship could be even more at home in this book.
But you know, I expect an open relationship in such a book to be something that both partners want and it was made abundantly clear to me that it is something Dominic agrees with for Jonathan’s sake (Jonathan wanted the freedom to hook up with other guys while Dominic was not there) but not something Dominic likes, or would have preferred to if I was his choice. So bottom line is Jonathan pissed me off for being an ass and the end of romantic storyline was not convincing to me.
I do not think I will be in any hurry to read the second book sadly even if I liked the mystery and Dominic well enough.
Grade: B-