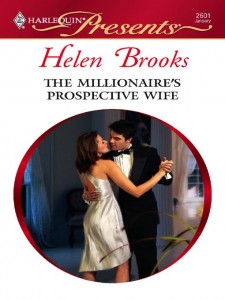 I bought this book at the WH Smith 50% off sale thinking that I hadn’t bought this before, but alas, I had.   Fortunately I only paid $1.57 (1.07 £ ).   When I wrote up this poll the other day, I thought of your books or at least the ones that had this storyline:   man falls for woman who is emotionally battered from a past relationship.   He pursues her relentlessly and refuses to give up even when the woman rejects and rebuffs him and essentially throws his love back in his face.   The Millionaire’s Prospective Wife has that storyline wherein the  hero who really loves a heroine and goes balls out to get her, no matter the roadblocks.

Cory James, a social worker, is out walking her aunt’s dog.   Against her aunt’s advise, Cory allows Rufus off the lead and he runs amok in the park ending his romp by knocking over Nick Morgan.   Much to Cory’s chagrin, Nick is “tall, lean and muscled with an aggressive masculinity that was rawly sexy-‘or that the jet-black hair topped a face that was out-and-out dynamite.”   Rufus destroys Nick’s phone and slobbers all over his clothes.   Cory insists on paying for the damage and Nick tells her that the only renumeration he’ll accept is Cory’s appearance as a date to a dinner he is hosting this evening.   He needs a date and his model friend bailed on him in favor of an assignment.

Silly setup taken care of, Cory and Nick begin their prickly courtship.   Cory’s past includes a very difficult past relationship with another man which affirmed her belief that something was lacking in her, a belief that was fostered by the cavalier treatment she received by her parents.   Nick is superficially like Cory’s previous fiance, rich, smooth, magnetic; and she tells herself that falling for Nick is a direct path to heartache.   Although we don’t get Nick’s point of view, we get alot of dialogue from him which tells the reader that he not only cares for Cory but that he loves her.   Eventually, though, even Nick gets frustrated by Cory’s inability to move on from her past.

There are things that will offend the progressive reader.   Heck the whole casting of “career” women in the negative offends me.   The hero is vaguely paternalistic with a “father knows best attitude” at times.   However, the storyline is one that I find immensely appealing. Maybe these stories are my guilty pleasure.   It’s hard to grade these books but I’ve read it twice now and wasn’t much concerned that I paid twice for it as well.   So it’s a B with caveats.

This book can be purchased in mass market from Amazon and ebook format from Sony and other etailers.

→ Jane
Previous article: Can you read in the car poll?
Next Post: Penguin Cancels Embattled Memoir