REVIEW: The Lost Book of Mala R. by Rose MacDowell

When your book was offered to us for review, I was intrigued enough by the blurb to request a copy. When I received the book and started reading it, I wasn’t sure what had initially drawn me to it. Not that it looked bad; it just seemed like the sort of literary women’s fiction that I generally avoid. I am not a big reader of women’s fiction as it is, and when I do read it, I tend to favor funny chick-lit over serious women-bonding stories (OMG am I the only one who thought The Friday Night Knitting Club was just so bad?). I wasn’t sure if The Lost Book of Mala R. would feature lots of female bonding, at first, but I could tell within a chapter or so that it was modern literature of the sort that I often have a problem with. That is, the characters, their lives and personalities were rendered in a depressing, even ugly, light. 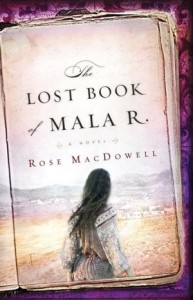 This is what I think is considered in modern literature to be “realism”, and it’s what drives a lot of readers to romance or mysteries or spy stories. I can live with bad things happening in a story, but I hate when the writing itself seems to be infused with a sort of contempt, or at least a lack of emotional generosity towards the characters. It makes reading a grim experience.

But I’m getting off track here; it wasn’t that The Lost Book of Mala R. was entirely grotesque in its depiction of the characters, but it was unpleasant and grimy enough in the early pages to give me pause. The reality of the rest of the book was both better and worse than I had begun to expect.

The story is told in alternating chapters by four women, one in 1948 and the other three in the present day. Mala Rinehart belongs to a group of gypsies in Texas, but in the first chapter, she is cast out for the period of one year, accused of causing bad things to happen with her spells. Mala is 18 years old and only really close to her broken-down alcoholic father Beni; she has always been an outsider in the clan. She decides to travel to Bakersfield, California to see if she can find a woman named Ruth Simon. Ruth knew Mala as a child and was kind to her, and told her to come to her in Bakersfield if she ever needed a home.

Meanwhile, in modern day Southern California, in a faceless new-ish subdivision whose denizens all seem to have been hit hard by the recession, a notebook that Mala wrote cryptic notes and spells in surfaces at a garage sale. It’s scooped up, on impulse, by Linda, a recent (and reluctant) transplant from New York. Linda is married to Peter, a divorced father of two in the financial business. Peter’s transfer (it’s implied that it was a demotion) has uprooted Linda from a comfortable and hard-gained life, and she’s not happy about it. She’s even less happy when Peter’s 10-year-old daughter, Paige, comes to stay for the summer, and possibly longer. Paige isn’t getting along with her new stepsiblings back in Connecticut, but Linda certainly doesn’t want her there. Paige makes her nervous; she may be only 10, but she’s already given to incisive observations and subtle put-downs that put Linda on the defensive.

Linda ends up giving the notebook to Audrey, who is married to Mark and has a 12-year-old son. Audrey seems to adore her son, but she’s less enamored of Mark; ever since losing his job he’s gotten involved in weird money-making schemes that seem to combine a cultish self-help message with a genuine and bizarre belief that one can live forever (if only one limits their diet to super-healthy food, and precious little of that). Audrey has recently begun an affair with William, a young disabled war vet who she met through her job (she works for an agency that finds low-cost housing for returning veterans). William is pretty obviously a distraction from Audrey’s dissatisfying life, and Mala’s little book provides another one, one that quickly begins to obsess Audrey as she decides to see if she can find Mala (or find out what happened to her).

The third woman in the modern day group is Christine; when Audrey convinces Christine to try a spell from the book, her already troubled life takes a turn for the worse. Christine is pregnant, which is a good thing, but sure she’ll miscarry just as she has so many times before. She’s so sure that she and her husband Tim go forward with a meeting with a potential surrogate, one they’d found before the latest pregnancy. Christine’s pregnancy has persisted further than any of her previous ones had, but she’s unable to really be happy about it. She’s just waiting for the other shoe to drop and disaster to strike. When it does, it’s from an entirely unexpected direction. Tim becomes a suspect in the murder of a local nanny, and then, when Paige disappears, a suspect in her disappearance. Christine isn’t sure she trusts Tim, which naturally enough further strains a relationship already strained by years of fertility problems.

The chapters covering Mala’s story are generally the most absorbing; this may be partly due to my preference for historical settings over modern-day ones (especially modern-day ones rendered so grimly as this one). But Mala is also generally a much more sympathetic, relatable figure than Linda, Christine and Audrey are. She’s half their age and then some, but she’s miles less self- absorbed than any of them. I found myself a lot more interested in what would happen to her than I was in Audrey’s affair, Christine’s pregnancy or Linda’s neuroses.

Of the three, Audrey was probably the most compelling, and again I think I can track it to self-absorption or lack thereof. Sure, Audrey is flawed, but at least she’s interested in the world around her, interested enough to want to find out about Mala (a device that is never entirely realistic; it feels pretty arbitrary). Linda and Christine go along for the ride but both are pretty consistently wrapped up in their own low-grade misery. This is where the literary “realism” comes in – none of these women seem remotely happy. Like, I’m not expecting nothing but sunshine and roses, but the depression and ennui that hangs over these women is just not something I want to read that much about.

The Lost Book of Mala R. would seem to have something in common with female-based friendship stories, except that Linda, Audrey and Christine don’t seem to be that great friends. Linda has lived in the neighborhood for less than a year, and her unhappiness about being there and general lack of warmth make it hard to imagine anyone really warming up to her. It’s unclear how long Audrey and Christine have known each other, but I didn’t get the sense of real affection between them – theirs seemed to be a friendship of proximity, and a fairly superficial one at that.

I would’ve liked to have seen a little bit more depth of characterization in the depiction of Linda, Audrey and Christine. Each has a backstory that is only really hinted at; at times I find it hard to keep their backstories straight (the exception was one trauma in Linda’s past that is alluded to, finally explained and resolved). They also seem to mirror each other in that each of their husbands has suffered financial hardship in the recession – apparently none of the women really expect to be their husbands’ equals in the financial sense, though Christine and Audrey do work.

So, what does this book have going for it, after all of my picking apart? Well, strong prose, for one thing – this is a well-written book. Perhaps because of that, and because of the alternating-story form, I found myself eager to pick up the book each time. That’s a big plus for me – there are books that I’ve probably liked more in a lot of ways but didn’t feel that compelled to read on a daily basis. The characters do become more sympathetic as the story progresses, and thus I found their navel-gazing less depressing than I otherwise would have. The various crises are resolved in some interesting and unexpected ways, though the one I cared about most was the most downbeat.

If I had a rubric for grading The Lost Book of Mala R., the grades would probably be all over the place. I think they’d average out to a low B, skirting the edge of a B-. I think it’s worth reading, but probably only for readers who are intrigued by the subject matter and don’t mind a little grim literary realism in their fiction.

→ Jennie
Previous article: Wednesday News and Deals: HarperCollins Sues OpenRoad for Infringement
Next Post: What Jayne’s Been Reading and Watching – November and most of December