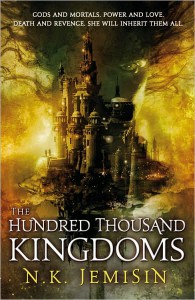 Traditional fantasy is one of my favorite genres. In fact, it’s the type of fantasy I love best. And yet, I have such a contentious relationship with it because so much of it features elements I’m tired of: the vaguely medieval European setting, the quest structure in which the protagonist collects convenient plot coupons to defeat the enemy, the mindnumbing lack of diversity when it comes to the cast of characters. Speaking as a reader who grows easily bored with a genre after seeing the same kind of story again and again (and again), it’d be nice to see more types of stories that take a different path in a genre with such a long history. So when I first heard about your debut novel last year and read the sample chapters on your website (note to authors: please put sample chapters on your website!), I eagerly awaited its release and devoured the book when Jane forwarded me a copy. The fact that this review itself is tardy is my own fault and in no way a reflection of the book.

The Hundred Thousand Kingdoms tells the story of Yeine Darr who, shortly after her mother’s death, is summoned by her grandfather, the supreme ruler of the land, to court. The message is not entirely without reason because Yeine’s mother was once next in the line of succession.

My mother was an heiress of the Arameri. There was a ball for the lesser nobility — the sort of thing that happens once a decade as a backhanded sop to their self-esteem. My father dared ask my mother to dance; she deigned to consent. I have often wondered what he said and did that night to make her fall in love with him so powerfully, for she eventually abdicated her position to be with him. It is the stuff of great tales, yes? Very romantic. In the tales, such a couple lives happily ever after. The tales do not say what happens when the most powerful family in the world is offended in the process.

And because one does not refuse an Arameri summons, especially when the person doing the summoning is one’s own grandfather, Yeine travels to the family seat of power, the city of Sky. There, she discovers the unthinkable: her grandfather has named her heir. And because there are already two existing heirs — her cousins, Scimina and Relad — this can only mean one thing:

“It is very simple. I have named three heirs. One of you will actually manage to succeed me. The other two will doubtless kill each other or be killed by the victor. As for which lives, and which die–” He shrugged. “That is for you to decide.”

What a friendly homecoming. It makes me all warm and fuzzy just thinking about it.

In many ways, this novel is structured like a mystery. Not that I’m a heavy reader of that genre, but the plot focuses more on Yeine seeking answers to various secrets than it does on her trying to secure the succession or engaging heavily with her fellow rivals. There’s intrigue but it’s more family intrigue than political intrigue along the lines of George R.R. Martin or Jacqueline Carey’s original Kushiel trilogy. It’s not that sort of book and I think readers coming in expecting such may be disappointed. I’d like to think they wouldn’t be because the story we do get is strong and original, but I know how can be when you have your heart set on one kind of story and instead get another.

What we do get instead is a powerful story about Yeine learning about her mother. In fact, her mother’s presence permeates throughout the entire book even though she’s already been dead a month when the story begins. Her mother’s actions, her mother’s choices — all of these things impact Yeine in the here and now. But aside from that, we also see the contentious relationship between the two, one that is indicative of many a relationship between a mother and a daughter. A daughter can think she knows her mother but in truth, she only knows the faces her mother chose to show her. Only in death does Yeine learn about the faces she never saw.

My people tell stories of the night I was born. They say my mother crossed her legs in the middle of labor and fought with all her strength not to release me into the world. I was born anyhow, of course; nature cannot be denied. Yet it does not surprise me that she tried.

The other half of the story we get is devoted to that of gods. What I liked about The Hundred Thousand Kingdoms was that it dealt with gods in a mythic sort of way — the creation mythos, the constant give and take of fighting and friendship, even the incestuous aspects of many myths are portrayed. In the present story, most of the gods have been enslaved and made into living weapons by the Arameri. Yeine encounters them almost immediately when her cousin, Scimina, wastes no time in introducing her to the cruelty that’s characteristic to their people. But just as much intrigue surrounded Yeine’s mother, intrigue also surrounds the diminished gods who are trying to find a way to restore balance and break free of the shackles placed upon them by one of their own. It’s up to Yeine to navigate through all of these obligations placed upon her without being reduced to a mere pawn.

As is obvious by the number of excerpts I’ve been including, I really loved the prose and the way this novel was told. It reminds me of old legends as told by a master storyteller. Initially there are what appear to be random interjections or tangents in the novel:

So there was love, once.

But love like that doesn’t just disappear, does it? No matter how powerful the hate, there is always a little left, underneath.

I don’t want to spoil what exactly these narrative interruptions are for those who haven’t yet read the novel, but it becomes clear about a third through the book. And I loved that revelation, and how hints of it were placed into the narrative from the very first paragraph.

Readers will either take to Yeine’s relationship with the chained dark god, Nahadoth, or they won’t. Personally, I enjoyed seeing how the power differential between them played out and changed over the course of the novel. I can understand why some readers would find it not to their taste, however.

If I have one complaint and it is a relatively minor one, it’s that the ending of the book is somewhat rushed and everything happens at once now sort of resolution. But as I said, it’s not a major quibble and didn’t make the book any less enjoyable for me.

I think readers looking for a change of pace from the usual settings found in the traditional fantasy genre will enjoy this one a lot. I thought the world was nicely developed and different from what we normally see. I liked that there were tensions among various classes and people, since that’s something that can get often glossed over.

The Hundred Thousand Kingdoms is a book I’d recommend to readers who like traditional fantasy but want something different from your Robert Jordans or George R.R. Martins. I also think fans of Tanith Lee and Storm Constantine will like this novel. I was strongly reminded of their work while reading it, so I wasn’t very surprised to see them cited as influences in the author interview in the end. I definitely look forward to the second book in the trilogy. (I assume it’s a trilogy?) B+

This is a trade paperback and the current ebook price is set by the publisher at $9.99