REVIEW: The Girl Most Likely To by Susan Donovan 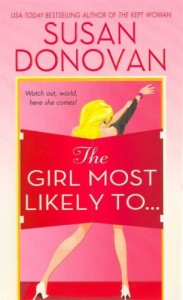 Your new book, The Girl Most Likely To reminded me very much of your first two books (Knock Me Off My Feet and Take a Chance on Me), which are my clear favorites of the Donovan oeuvre.   The likeable hero, the quirky heroine, the family secret, and the goofy dog are all back for another round in a highly readable if slightly troubled tale of retribution, forgiveness, and reconciliation.

For almost twenty years Kat Cavanaugh has been thinking about how her best friend and first love Riley Bohland would react when he found out that he had a son.   Dumped on the very night she was going to tell him that she was pregnant, and unceremoniously hustled out of town by her mother (who was fearful of Kat’s stepfather’s reaction), Kat hitched a ride with a truck driver who dropped her off with his kindly protective sister in Baltimore.   Meanwhile, back in Persuasion, West Virginia, Riley had no idea about Kat’s pregnancy or why she left town.   You see, he was under a lot of pressure from his father and his coach to put some distance between him and Kat, so Riley got the not so bright idea that he would break up with Kat for just a little while to get everyone off his back.   But Kat didn’t wait around to hear all that, and Riley, along with the rest of Persuasion, seemed to have no idea what became of Kat.

Until, that is, she shows back up in Persuasion to give Riley a much belated dressing down for dumping her and leaving her alone and pregnant.   All grown up and newly rich (thanks to Phyllis – her Baltimore savior – leaving Kat her substantial investment earnings), Kat is completely dumbfounded when Riley – who is still as hot as ever – tears into Kat first for running away and keeping his son away from her.   Confused, enraged, splattered with mud from the construction site where she turned up to confront Riley (who she mistakenly believes is a construction worker), Kat feels that she’s been rejected and humiliated all over again by the only man she ever loved.   With her mother dead, her noted sculptor stepfather no refuge (he was terribly abusive to Kat’s mother), and her son blissfully unaware that Kat even knows who his father is, Kat retreats to the town’s single bed and breakfast to lick her wounds and commiserate with her best friend and sidekick Nola, who has accompanied Kat on the trip.   And when Riley shows up that night to actually talk to Kat, twenty years of hurt feelings and unresolved longing spill out, making it obvious that their relationship is far from over, despite the significant obstacles they face as a couple.

Those obstacles include the distrust between Kat and Riley (not to mention their son, Aidan’s, reaction to the news that he was deprived of his father for almost 20 years), Riley’s unbalanced ex-fiancée and her refusal to be “ex-ed” out, the emotional and financial wear from Riley’s failed year-long search for his son, Kat’s feelings of abandonment, betrayal, and anger toward her own family, and Kat’s bitter and unbalanced stepfather.   It is clear that Riley and Kat are still deeply in love with each other, but they have a great deal to work out if they are to ever move forward as a functional couple.   And one of the book’s major strengths is that the characters actually recognize the complexity of their situation:

“I want another chance with you,” Kat said sud ­denly, before she lost the nerve.

“OK-”
“I want to get to know you again-as the com ­plex grown man you are, not the kid of my memo ­ries.     I want you to know me, too, all of me, including my darkest mistakes and my brightest hopes.”

“I want that, too,” Riley said, his voice warm and gentle.

“I want to see if there’s a future for us. I’m so sick of wondering and guessing and fantasizing about you and me-I just want there to be a you and me.”

Unfortunately, one of the book’s major weaknesses is that despite these protestations the actual resolution is quite simple and a bit simplistic.   Despite, for example, the fact that these two have so many mistakes between them, not to mention a son who has his own feelings of betrayal to deal with (which are quite rapidly put to rest), right after this heart to heart talk Kat and Riley have unprotected sex and Riley begs Kat to have another child with him.   In fact, as far as I can tell, all of the sex they have in the book is unprotected, including the night they spend together right after Kat returns to Persuasion and absolutely nothing has been resolved between them (most of it hasn’t even been broached or adequately discussed).   This quality (which has appeared in other Donovan books) undercuts both the intelligence and complexity of the characters, because it becomes difficult to trust the awareness they seem to possess, undermining the distinct pleasures of watching two supposedly smart and self-aware people fall (back) in love.

This weakness is both substantial and a shame, because Kat and Riley are both likeable and interesting characters in their own right.   Kat has been betrayed by her family or origin and the man she trusted first and most, which leaves some real scars on her heart, making her actions at the beginning of the book (her fleeing, at sixteen, out of town by herself instead of under the guidance of her aunt, as her mother had intended) realistic and understandable.   Riley has undergone his own disappointments, his own regret taking a significant toll on him, despite the support of his loving family and close-knit hometown (his brother Matt is a strong secondary character, although the romance between Matt and Nola seems predictable and predictably convenient).

These two characters have real, substantive reasons to be hurt and wary, and there is so much potential in their reconciliation that gets brushed past or pushed out of the picture by the external conflicts manufactured to keep their relationship on the wire.   For example, Carrie, Riley’s ex-fiancée, is somewhat flat as a character, at least until she has to face the reality of her situation late in the book.   Then there is Kat’s stepfather, Virgil, who is a truly unsavory character, a quality that serves some purpose in terms of justifying Kat’s total break with everyone in Persuasion, but also seems needlessly perverse.   In fact, one of the things that has always bothered me in Donovan’s books is that her villains tend to be either gay or sexual predators (or both), and this book offers no break in that disturbing pattern.

The Girl Most Likely To is, on the surface, a pleasing reunion story with many signature Donovan touches, from the goofy dog to the quirky heroine, and its readability is connected largely to the likeability of the characters, the competent prose, and the swift pacing of the narrative.   Yet it is also a book that does not settle as well as it initially goes down, with so much of its amiability masking some substantial problems in character development and conflict resolution.   There is an unveiling at the end of the book that I suspect will cause some disbelief in the way that it so perfectly ties so many elements of the book together, for example, and the incredible eagerness of Kat and Riley to repeat the very same actions that brought them so much pain does not offer remedy but merely undermines their integrity as “older and wiser” versions of their teenage selves.   This characteristic is especially insulting to Kat’s character, because it both undermines her credibility and makes her seem downright desperate.

Although in so many ways The Girl Most Likely To surpasses Donovan’s last book, The Kept Woman, it still gave me a mixed reading experience.   In fact, I really struggled with the grade for this book, because the enjoyment I got from it was almost as strong as the disappointment I felt with its problems, and I wavered between a C+ and a B-.   Ultimately, I think The Girl Most Likely To is more a C+, a true mix of highs and lows, virtues and weaknesses.

This book can be purchased in mass market from Amazon. Because this is a SMP book there is no digital copies.