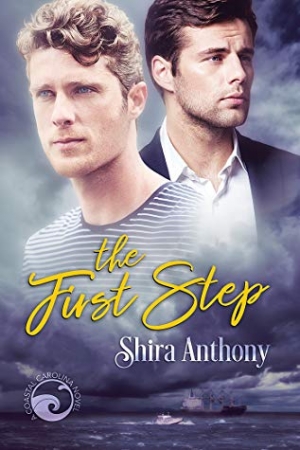 The first step is the hardest. After a scandal, New York political reporter Reed Barfield is lying low at the North Carolina coast, writing a story about the seafood industry. But it’s the harbor pilots on the Cape Fear River who capture his interest—men who jump across ten feet of open ocean to grab a rope ladder and guide huge container ships into port. Men like sexy but prickly Justin Vance.

After surviving an abusive childhood and a tour in the Navy, Justin isn’t fazed by his dangerous job—it’s certainly easier to face than Reed’s annoying questions. Justin isn’t out at work, and he doesn’t need Reed digging into his personal life or his past.

But Reed’s no stranger to using his considerable charm to get what he wants, and as he wears Justin down, they realize they have a lot in common—and that they like spending time together. Moving beyond that, though, will mean Justin confessing his sexuality and learning to trust Reed with his secrets—if Reed even decides to stay. Both men want a future together, but can they find the courage to take the first step?

I remembered a m/m suspense book of yours a few years back which I loved and a short f/f story I read more recently on the recommendation of DA Janine. When I saw your name on this book I checked out the blurb and I ended up really liking it.

I always appreciate when the guys in m/m books do some interesting things for a living and it is based on the real world. I did hear about harbor pilots/river pilots before, but basically I just knew that sometimes local mariners help the big ships come to their harbors. I did not even know that they are called pilots and I had no idea that their jobs could be very dangerous. Well paid, but also very dangerous.

The blurb gives you a good set up. Reed is trying to write a story about the seafood industry in a small town of North Carolina because his editor in New York promised that this would help Reed get his new York job back. By the way, I am not sure what other readers would think about what kind of scandal Reed was involved back in NY (and I will not tell you), however it was not what I was expecting at all and my opinion of Reed did not change after I learned what happened. Reed meets Justin when Reed got a little bit too concentrated on taking pictures for his story out in the sea and could have gotten himself hurt. Reed observes Justin doing his thing and decides that he wants to do a human interest story about harbor pilots and specifically about Justin. With his charm and connections Reed gets Justin’s boss to convince Justin to talk to him. Too bad Justin is not very talkative :).

“Reed smiled again. “I don’t know much about boats, so I figured I’d go to the source.” In his experience, playing dumb and asking for help usually resulted in people opening up and telling him everything they knew. It was human nature to feel good about knowing more than someone else, not to mention people enjoyed being helpful. Not Justin.

“Okay. And?” Reed’s cheeks were starting to hurt from smiling, and it clearly had no effect on the guy. “And I was hoping to find someone who could tell me about the Vanguard.” As attractive as Justin was, he wasn’t a conversationalist. Reed needed to find someone else to speak with. “What about her?” Justin asked. “She’s pretty big, right?” Oh, that was just brilliant! Justin didn’t seem to mind the lame question. “She’s one of the larger ships around.””

I really liked the initial banter between the men, I also liked that the author gave Justin a very good reason to not initially feel very friendly towards Reed. He could have gotten hurt and Justin could have run into serious problems at his job if it had happened.

““Wait a minute.” Justin’s expression morphed from mild irritation to open hostility. “Are you the idiot we nearly rammed coming into port?” “I wasn’t exactly driving—I mean, captaining the—” Justin grabbed him by the collar and shook him, his face red with fury.

“Do you know how lucky you are you weren’t killed? If I hadn’t figured you were too stupid to respond to my hail and get the hell out of the way, you and your boat would have been toast.” Reed tried to pull Justin’s hands away, without much luck. The guy was as strong as he looked. “Whoa. Justin. Calm down.***

““Justin?” Greg wore a you’d-better-damn-well-behave expression. “Mr. Barfield’s here to do a story.” “Did he tell you he nearly was the story?” Justin snapped. Greg frowned. “I get the impression I’m missing something here.” “It was entirely my fault,” Reed said, to his credit. “I was out on the water taking some photos of a shrimp boat, and I didn’t see the container ship coming.””

Reed is a genuinely good guy however and manages to win Justin over who sees that Reed is just as passionate about his work as Justin is and did not mean to put his life in danger when they just met.

The story spans across three or four weeks (I think closer to three), but the author managed to write a slow burn romance and I was very pleased about it. She mixed the slow burn romance with the constant sense of danger due to the fact that Justin steps into potential danger almost every time he goes to work and I thought it made for a very fun setting

I liked that both men mostly behaved as adults . There were couple of mini conflicts between them which made sense because it happened for plausible reasons, and even if conflicts did not make sense, I would have forgiven it since the men met only recently and didn’t necessarily know what makes each other tick yet and how to avoid it. I thought they avoided stupid melodrama in their communications and I was pleased.

I just thought this book was very well written and Reed and Justin had a shot at a great future.