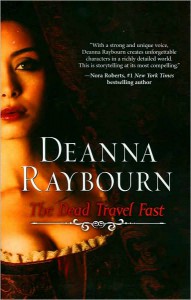 You created a splash in the subgenre of historical mysteries with the “Silent” series and now move on to something a bit different. The era is still Victorian but the place is the depths of Transylvania where the strange is normal and things are believed which defy the imagination of other countries.

With little to hold her in Scotland, Theodora receives a letter from an old school friend which will change her life. She’s been invited to the friend’s arranged wedding to a relative, Count Andrei Dragulescu. So off Theodora goes, with everything she owns, to a Carpathian castle which seems mired in the past and a family which borders on Draconian.

Theodora feels as if she’s in a totally different world from anything she’s ever known, a place where the bizarre is accepted, a land where no one questions the existence of werewolves or vampires and everyone keeps their windows shut tight at night. Can she survive this alien place and find love or will its secrets claim her very life?

This literally has almost all the elements listed for a gothic novel. I looked. You must have looked at numerous sources and checked off each element as you worked it into the plot. The parts makes a satisfying whole yet there is almost nothing new. The book isn’t a parody of gothics, it doesn’t use those standard elements as a springboard to something different, it merely tells a story which has been told many times already. It’s told well, it’s readable, it uses the usual gothic features to convey what you want but unless the status quo is what a reader wants, I’m afraid fans of the genre will find themselves on autopilot to the finish.

I do like that there are explanations for all the supposed supernatural events described. And that the explanations make sense both in the story and in a historical context. I like that the heroine is a strong enough character to go about doing some of her own saving. Even if at the end, she still needed to rely on others for her final salvation, she wasn’t totally weak and fainting. I like that the hero appreciates a smart woman and reading and writing woman even more. There’s a great dog. I even like that both Theodora and Andrei compromise their life goals at the end in order to work towards their HEA.

Yet I found parts of the story to lag and drag and noticed that my reading pace varied markedly throughout the book. After a certain amount of time stuck spent reiterating the same things, my mind would drift a bit and I’d have to wrestle it back onto the subject. Built in reading breaks became a necessity instead of breathlessly turning pages to discover “what’s next.” For some reason, the relationship between Andrei and Theodora lacked “oomph” for me. Maybe because it sticks so closely to the established stereotype in gothic novels thus not allowing for any surprises along the way.

The imagery of the countryside, the peasants, the castle – all were nicely done. And if you’re going to write a gothic novel, where better to set it than Transylvania? And what better nationality to use to counter all that gothic-y-ness than a Scotswoman of English descent. No offense to either country but both have an image of solid implacability and sound sense. There is Theodora with her stout walking shoes and plaid wraps, ready to face anything that overblown Transylvania might try and throw at her.

I’m not sorry to have read the book and I felt almost certain that with your name on it, the book would prove to be well written. But it didn’t turn me into a fan of the genre though it served as a nice change from my usual fare. B-