After reading Lord of the Vampires, I was encouraged to try another one of your books. Your voice can be light and funny and the sexual tension is fun, but that book fell flat for me. I noticed The Darkest Surrender in your Lords of the Underworld series had a lot of praising reviews, and the harpies sounded intriguing, so I decided to give it a shot. I’m happy to say that this was a fun read, and made me interested in other books in the series. 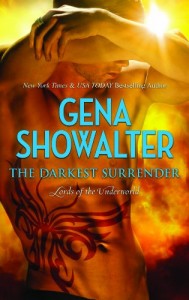 The Darkest Surrender is the story of Strider, who is an immortal Greek warrior possessed by the demon of Defeat. Strider must accept all challenges and win to appease his demon. If he wins, he feels intense pleasure. If he loses, he feels shattering pain. It is also the story of Kaia the Disappointment, a bloodthirsty harpy who has declared Strider to be her consort. She just needs to convince Strider of this fact. Kaia also needs a consort with her for the upcoming Harpy Games – a brutal free for all where the other harpies are intent on destroying Kaia. If Kaia has a consort at her side, he can heal her and encourage her, so his part is crucial. Kaia also feels that Strider doesn’t truly want her because she once slept with Paris, the Lord of Desire.

I went into this book only vaguely knowing the details of the setting. I think I read the first novella in the series, so I was familiar with the general set-up, if not what has happened since. Greek warriors let loose the demons in Pandora’s Box, and now they are cursed to house them inside their bodies. They are immortal now, but tormented by their very specific demons. I thought this was an interesting premise, and I didn’t have any trouble following the story, though it was obvious that there was a lot of set-up and relationships that I had missed in previous books. I think this stood well on its own, however.

I really enjoyed the harpies. They are a race of brutal, winged warrior women who steal, carouse, and drink blood to heal yet live by very strict rules when it comes to conduct around other harpies. I wasn’t so keen on the fact that they are all tiny and delicate and their skin glitters like a diamond, but I’m willing to overlook that as more was made of Kaia’s warrior-ness than her glittering. In fact, everything that governs a harpy’s nature deals with fighting and attacking. Kaia attacks other women she thinks are interested in Strider. She challenges everyone she comes across. The harpy games were a natural extension of the aggressive, combatative harpy relationships, and I thought it was a fun storyline. I also found it intriguing that in harpy relationships, the woman is the dominant, and she selects her consort, not the other way around. It’s a nice change of pace from the soul-mate trope, where the heroine often has little choice or say in the relationship. Kaia is also very close to her twin, Bianka, and I loved the close, teasing relationship between the two.

“What are you going to say to Lysandy, anyway? Exactly.”

“Try me. Pretend I’m your disgustingly in love angel consort and confess.”

“Okay.” A sigh, a straightening of the spine, then lovely amber eyes were staring over at Kaia with trepidation. “All right. Here goes.” A pause. A gulp. “Darling, I, uh, have something to tell you.”

“What is it?” Kaia said in her deepest voice. She propped her elbows on the bar, the hanger hooks digging into her skin. “Tell me quickly because I need to spread my happy fairy dust and wave my magic wand when–“

I did feel like the story was fast paced and fun, but I also felt like the relationship was the weakest part of the story. Both Kaia and Strider are childish characters. Kaia has the mentality of a sixteen year old boy. Her apartment is covered in beer cans and frat-like decor. She loves pranks and arguing. Strider is equally childish at times.  He’s competitive, sometimes surly, and his inner monologue is like that of a teenage boy. He even refers to his dick as Stridey-Monster.  That made me shake my head (and not with amusement). While alpha, he struck me as more Type A personality than aggressive alpha male, and this was probably due to the nature of his demon. Sometimes their bickering made me want to put both of them into time out, but I thought they were a well matched couple, and by the end of the book, I thought even the bickering and juvenile humor between the two meant they were right for each other.

I don’t know if this book would be for everyone. Like I said before, the book is light and snappy and full of frat girl violence and an equally childish hero. I felt like this passage pretty much summed up the hero and heroine:

Use my Rod. “That’s what he said,” Strider snickered.

She blinked at him. “That’s what who said?” When he offered no response, she demanded, “What did he say?”

Kaia would have understood the joke. Probably Kaia would have pretended a beer bottle was the Rod and jacked it off while laughing. Gods, he dug her sense of humor.

If that’s your kind of couple, you’ll probably enjoy this book. I did enjoy it, though sometimes I found the antics of both characters a little overdone. I am not sure that I’m interested in Paris’s book (which is next) but I liked the harpies enough that I’m going to go through your back list and read more about Gwen and Bianka. B