REVIEW: The Concubine by Jade Lee 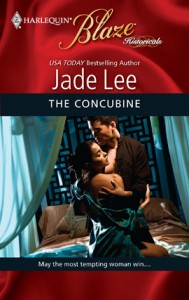 Like Jane, I’m biased towards books featuring Asian heroines.   So imagine how excited I was to discover a book that not only featured an Asian heroine but an Asian hero too!   And in historical China!   Even better, the cover depicted them as both distinctly Asian.   That last bit sounds like a strange thing to be excited about but speaking from experience, book covers don’t really have a good history of staying true to a character’s ethnicity.   Just look at the cover of that Harlequin Presents with the Asian heroine that Jane reviewed last month.

Chen Ji Yue is the only daughter of a poor noble.   With little money to their name and two brothers who need to take the Imperial examinations, her family sends her to the Forbidden City.   The previous emperor has recently died and his son has newly ascended the throne.   And his first duty as emperor is to produce an heir.   To this end, he sends notice to all the eligible young women that he is seeking an empress.   And that’s not all: he also seeks four favored concubines and enough women to fill the two tiers of harems below that.   So even though any of these roles would fulfill her goals, Ji Yue’s goal is to be chosen as empress because she’s been raised her entire life to be a political wife.

Sun Bo Tao is the emperor’s cousin and childhood best friend.   With no real position, money, or title to his name, he’s forced to live on the emperor’s whims.   And judging by what we see in the story, the emperor is a capricious man.   Some readers might find that off-putting but I enjoyed seeing someone raised to be emperor actually act like an emperor.   He thinks he’s a god so he acts like he is one, even if this means being cruel to his dearest friends.   When Bo Tao suggests that his best friend focus on the impending visit of a group of Dutch envoys instead of searching for an empress, the emperor punishes him by placing in charge of the Festival of Fertility — the very search for the new empress he was advocating against.

This is an immensely likeable book.   Even with the Asian leads and setting, the story itself is a great read.   Ji Yue isn’t the most beautiful of women so she was taught to use her brain, and the ways in which she maneuvers through the candidate search show just how clever she really is.   She also has an insight into current events (the Dutch envoys, the civil unrest in China) that show how canny she is about politics and ruling, proving just how good an empress she would be — if the emperor were interested in a woman who was more than a womb, which, unfortunately for her, he is not.

Bo Tao is the classic example of someone who can’t escape his past and the mistakes of his youth.   As the emperor’s childhood friend, they used to run wild in the Forbidden City and he is infamous for being an unrepentant seducer.   At least that’s what everyone says.   As we see from his perspective, however, Bo Tao is older, wiser, and more responsible than the emperor.   He may have a bad reputation but there’s no sign he’s acted that way in a long time.   If anything else, he’s doing all he can to win the adviser position the emperor’s been promising him since forever.

I admit harem stories aren’t my favorite so I’m not sure how this holds up to that trope, but I do like stories in which the protagonist goes after one person, only to discover another person (usually the best friend or sibling) is more suited for them.   And for me, the story delivered on that.   Ji Yue used all her strengths to try and win the emperor’s affection: her intelligence, her political savvy, her cleverness.   But in a search for the perfect woman to bear the imperial heir, those traits aren’t at the top of the list.   Or anywhere near the middle, for that matter.   Bo Tao views the Festival as nothing more than an inconvenient annoyance and has no desire to spend his time with desperate virgins panting after his best friend.   But as he spends more time with Ji Yue, he discovers that some women — and this woman in particular — deserve better than the life they’d get in the Forbidden City and that in fact she’d be wasted as the emperor’s wife.   The way they deny their attraction to one another while trying to keep it a secret from everyone else was delightful.

Some readers might find the ending to be a deus ex machina but in all honesty, I can’t see Ji Yue and Bo Tao getting their HEA in any other way without completely violating the limitations placed upon the story by the historical setting.   For other readers, however, I think this is a story that makes excellent use of familiar romance tropes — the poor heroine who needs to earn money for her family, the reformed bad boy hero who falls in love with the woman promised to his best friend — and breathes new life into them by using them in a culture and time period not often found in the genre.   B

This book can be purchased in mass market from Amazon or ebook format from Harlequin.   It is a February release and you can only get the early releaseas at eHarlequin.com.   Smart or what?