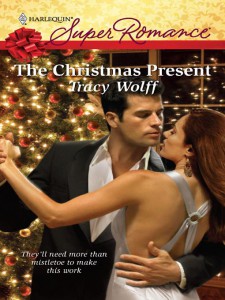 I am ordinarily not a fan of the holiday focused book although I know that these are popular with many many readers (including my dear blogging partner, Jayne).   However, I did enjoy your first book with Harlequin, A Christmas Wedding.   That book contained quite a few out of the ordinary elements including the age of the couple as well as the characterization of the matriarch that I wanted to give this one a try.   I was glad I did.

The Christmas Present is more traditional in its plot (lovers from the opposites sides of the track) but the characterization is still strong.   Vivian Wentworth is a young divorce attorney in a large, prestigious firm in San Francisco.   Her senior partner takes on a pro bono case representing a young man accused of murdering his pregnant girlfriend and assigns this case to Vivian.   She does not have any experience in a criminal law and feels that this can only turn out badly.

Rafael Cardoza runs the community center, Helping Hands, where Vivian’s client is currently residing. Rafa believes strongly that Diego is innocent and is just as convinced that Vivian is out to screw Diego over.   Rafa learned early on that rich girls liked to have men like him to be a dirty side secret and at the first hint of a public relationship and the rich girl would cry assault.   Rafa went to prison because of a rich girl.

Vivian begins to investigate the murder and becomes convinced that Diego is innocent.   Her beliefs become cemented as she interviews dirty cops and fields threats to back off.   Her parents, interested more in their social standing, become concerned with her insistence on trying the case instead of arranging for a plea.   The case is beginning to get increased attention.   Vivian’s father and mother remind her that she needs to be concerned about her standing with the firm because it is clear that Richard, the senior partner, assigned this case knowing Vivian had no experience in criminal law. It’s as if he is waiting for her to fail.

Rafa has a big chip on his shoulder.   He struggles between thinking that he’s not good enough for Vivian and that Vivian isn’t good enough for him.   As Rafa and Vivian spend more time together, Rafa sees how smart Vivian is, how steadfast she is, and how attractive she is.   He is drawn to her but against his wishes.   He is afraid of what his family will say and how being with him will cause rifts in Vivian’s family.

Vivian simply didn’t care enough for the San Francisco social scene to be bothered either by Rafa’s criminal background or his less than perfect job. The only thing that prevented them from being together was Rafa’s fear and his pride.  I enjoyed the legal part of the story although Vivian’s initial meeting with Diego took place in front of Rafa which I think would be a violation of the attorney client privilege.    The mystery surrounding Diego and the murder of his pregnant girlfriend seemed a bit far fetched but it didn’t detract from love story between Vivian and Rafa.

I appreciated Rafa as a non caucasion, WASP male protagonist.   While class played a bigger role in the conflict than race, Rafa couldn’t have been replaced by any other white male character.   The story didn’t revolve around Christmas but it did use the holiday as a scene to bring the two together.   B-