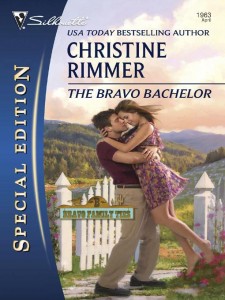 While you have been a long time commenter on Dear Author, I hadn’t picked up one of your books until recently. I kept meaning too but I never saw your name within the lines at Harlequin I usually perused each month. Jayne’s reviews of various Harlequin books has encouraged me to step outside my comfort zone and so when I saw your name, I immediately snapped up the title. I had no idea what to expect.

The Bravo Bachelor must be a continuation of members of the wealthy Bravo family. Gabe Bravo is the fixer. If there are problems or bumps to the furtherance of the Bravo empire, Gabe sallies forth to smooth the way, eliminate the obstacles in such a charming way that the impediment was apologizing for being there in the first place.

Gabe Bravo, however, meets his match in Mary Hofstetter. Mary owns a small patch of land that was willed to her by her now deceased husband. Gabe’s father has determined that this patch of land will be the site of a future Bravo resort. Mary is pregnant, alone, and cash poor but she keeps saying no because her husband wouldn’t have wanted her to sell and she doesn’t really care to sell either.

Gabe is fairly savvy and recognizes that Mary is not going to be open to flattery and affirmation. “He studied her face for a moment, thinking that his job here would be easier if she were a little needier and not quite so smart.” Instead, he tries to show her the beautiful resort, how it will fit into the landscape and how it will provide her and her unborn child with every opportunity:

Here’s what matters," he told her. "Sell that overgrown hundred and twenty acres out there to BravoCorp at the price I’m going to offer you this morning and you’ll be a wealthy woman. You-‘and your baby-‘will never want for anything for the rest of your lives. You can go to bed and get some rest when I leave because you won’t have to work. Not today. Not ever again."

I’m convinced, but Mary, not so much.

With another soft grunt, she sat a little straighter. "There are worse things than not having a lot of money. And better things than being rich. Things like a place you love to be. Like having good people to care for, who care for you. This ranch is the place I love to be. And as for having to work, well, isn’t that a lot of what life’s about? It’s true I’m pretty beat today, but I like to work, most of the time. And if I sold out to BravoCorp so you could carve the land my husband loved into pricey half-acre lots, well, I’d never forgive myself." The coffeemaker sputtered. She glanced toward the sound.

In just a few paragraphs you showed me that Gabe was really persuasive and that Mary was more interested in her own principles than the easy way out. The reason why this is so valuable is because this is exactly the conflict that plays itself out later in the book. It’s foreshadowing in a quiet but meaningful way making me realize that every scene is the story was carefully chosen to convey a message about the characters and not just filler. I really appreciated that.

Mary goes into labor shortly after Gabe’s presentation and Gabe finds that he cannot leave her alone. Mary’s mother in law was set to take care of her but Mary is delivering early and the mother in law is gone. Gabe’s innate sense of responsibility requires him to stay by Mary’s side through delivery, through her stay in the hospital, and then settling her at home.

The more time that Gabe spends with Mary, the more that he appreciates her good sense and practical and optimistic look on life. As for Mary, it’s hard not to be persuaded that the grass is blue when Gabe is describing it. Mary and Gabe fall into a physical relationship which suits them both until Mary realizes that she has no place in Gabe’s life; that he has a life outside of the ranch and the baby and that he has never invited her into that part and Mary becomes dissatisfied.

It was interesting to watch how Gabe inexorably tries to take over Mary’s life, to mold Mary into the perfect companion for him. He doesn’t do it because he doesn’t respect or care for Mary, he simply does it because it suits him, it makes his life more comfortable. Mary, though, grapples with her principles against the easy way out (see aforementioned introduction of plot conflict FTW!).   She cares a great deal for Gabe but she sees that a continuation of the situation between her and Gabe would result in a loss of self respect, a loss of her own sense of self.

This was a quiet romance but a smart one. I liked both Mary and Gabe. There wasn’t too much of the former Bravo characters. I thought that the relationship progressed naturally and the ultimate point of conflict was very authentic. It certainly encourage me to pick up more Rimmer books in the future. B

This book can be purchased in mass market from Amazon or ebook format from the Sony Store and other etailers (up until April 1, you have to buy the ebook directly from Harlequin).