REVIEW: The Billionaire Next Door by Jessica Bird 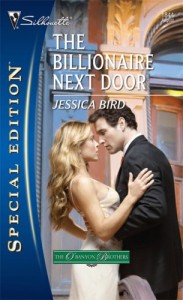 After eyeing it all year last year, I finally decided to sign up for Keishon’s TBR Challenge. I figured it would motivate me to dig up some of the older books that have piled up around my house which I have been ignoring in favor of the new and shiny.

Keishon’s assignment for January was category romances. I must admit that though I did have a few in my to-be-read pile, I don’t read many categories. I tend to prefer longer books. But your 2007 book, The Billionaire Next Door, has been in my TBR pile and I’ve wanted to read it for a while. This challenge was my golden opportunity.

Sean O’Banyon specializes in corporate mergers and acquisitions. Although he is now a Manhattan billionaire, pursued by women and sought after by deal-makers, Sean was once an abused child from Southie, Boston. When Sean’s once-abusive father dies, Sean, who hasn’t spoken to his father in years, travels to Boston to collect his father’s remains and get the duplex in which his father lives ready to sell.

It is in Boston that Sean encounters Lizzie Bond. Lizzie is the nurse who lives in the other apartment in the duplex, and was a friend of Sean’s father. Since Sean’s father kicked his drinking habit some time after Sean left the house and before Lizzie moved in next door, Sean and Lizzie each view the deceased Eddie O’Banyon very differently.

Though at first Sean suspects Lizzie of having tried to get her hands on his father’s money, he can’t help but be attracted to her warmth and kindness. And while Lizzie tells herself that Sean is just passing through and she is the long-term relationship type, she finds it hard to resist his good looks, his charm and his obvious vulnerability.

Then Lizzie loses her job. Before too long Sean and Lizzie are spending more and more time in each other’s company. But Sean, who cherishes being appreciated for who he is rather than for the fortune he has banked, doesn’t tell Lizzie about his true career, nor does he tell her much about his childhood. He is afraid to trust Lizzie fully, and Lizzie knows he’s holding back. Will they be able to overcome the obstacles of Sean’s present and his past?

Sean reminded me a bit of some of your heroes from the Black Dagger Brotherhood series, in that for all his external power, he could be very vulnerable at times. His memories of his father’s abuse reduced him to a child whenever he entered the apartment he had lived in as a boy.

He had also exhausted himself with work, and it was good to see him relax a little with Lizzie’s help. One of my favorite scenes in the book was one in which Sean and Lizzie “play hooky” and bask in the joys of a beautiful day. It was very satisfying to see Sean learn to relax and savor the simple things that can make life joyous.

I was a bit less enamored of Lizzie than I was of Sean. She was so sweet, caring and self-sacrificing that it was hard not to feel that she was more saint than human. I appreciated that she stood up for herself in the relationship, and I didn’t dislike her, but the way she was so patient with Sean, and never pushed him to reveal what happened in his childhood, even though she could see signs that something was wrong with the O’Banyon family, did not seem realistic to me.

On one level, The Billionaire Next Door is a classic Cinderella story, in which the sweet, hardworking and impoverished heroine gets her prince. But on another level it is also a story about two people who had completely different experiences of the same man. To Sean, his father was a monster, while to Lizzie, Eddie O’Banyon was someone who looked out for her and worried for her as she worried for him.

While I liked that Lizzie and Sean viewed Sean’s father through different lenses, there were times when I felt that the contrast between the way Sean saw his father and the way Lizzie saw him was too great. Sean seemed to have no good memories of his dad whatsoever, not even from the time before his mother died and his father began drinking. Lizzie did not see even a glimmer of her neighbor’s abusive streak.

Still, I loved that Eddie O’Banyon remained partly cloaked in mystery, even at the end of the book. He was an enigma even to those who had known him best, a loner whose innermost thoughts and feelings were never expressed. The dead take their regrets to their grave, and the living can’t always know what drove them. That was very much the case here, and it made the book more lifelike and real as well as more poignant.

One of the scenes late in the book, in which Lizzie learns about what Sean suffers and they talk about it, made me cry. You made me care very much about Sean and his brothers, and I hope very much that Billy and Mac’s books are forthcoming, since I would definitely read them. As for The Billionaire Next Door, I enjoyed it and do recommend it to our readers. B.