Warning: mysqli_query(): (22032/3141): Invalid JSON text in argument 1 to function json_contains: "Invalid value." at position 0. in /home/customer/www/dearauthor.com/public_html/wp-includes/class-wpdb.php on line 2187
 REVIEW: Talk Me Down by Victoria Dahl
December 15, 2008

REVIEW: Talk Me Down by Victoria Dahl 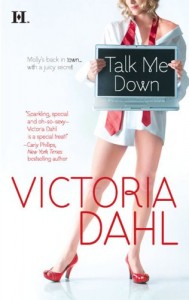 I kept meaning to read your historical books. Janet aka Robin wrote a wonderful reivew of A Rake’s Guide to Pleasure but I always feel compelled to read the new books with my free time. When your contemporary landed on my doorstep, I thought that I would break my Victoria Dahl cherry with this one and what a great experience for my first time.

Ben Lawson and Molly haven’t seen each other for ten years, not since Molly caught Ben in a very compromising position. This scene created an indelible mark in Molly’s memory and actually became the source material for her very first novel. Ben, of course, does not know this. Molly was his best friend’s sister and she was always off limits.

When Molly returns, Ben is the Chief of Police of Tumble Creek. He had lived down a terrible scandal involving his father as a teen and has grown up to be a man of good standing in Tumble Creek. While he seems helpless within Molly’s gravitational pull, he knows she’s hiding something and secrets are something he doesn’t do. Still, Molly’s frank appraisal and obvious invitation for fun is something he can’t turn down.

Molly realizes she should have told Ben that he was the inspiration for her career, but as all secrets go, the longer that she doesn’t tell him, the more difficult coming clean will be.

Ben is one of the most fun, most adorable, but very sexy heroes I’ve read in a long time. He blushes! More than once! But it doesn’t detract from his manliness in anyway. Ben actually is a bit of a metrosexual in his habits: he drinks wine, tries to dress nice, and has a photography hobby. I think the fact that he is a big, god of man with a gun strapped at his side tends to diminish any effete thoughts. I loved Ben, his self deprecation, his healthy appreciation for women, and I hope to see more like his kind lurking behind those man titty covers.

There’s plenty of humor derived from small town situations and trying to have sex in inconvenient places (such as Ben’s patrol car). Every chapter that starts from Ben’s POV contains guesses as to what Molly’s profession is. This serves two goals: it’s hilarious and it shows that Ben actually thinks like a police person – gathering clues and ruling out possibilities.

This book is steamy. I guess the RT reviewer thought it was too, well, dirty, calling your heroine “a dog in heat.” I’m not going to even try to rebut it because that’s one of the things I liked best about this story. Molly is frank in her appreciation for sex and for her enjoyment of it. She’s not shy about telling Ben what she likes in bed which happens to turn Ben on. Molly is kind of a dirty talker (she is an erotic romance writer, after all) and after a bout of sex with dirty talking, Ben finds that he wants her to talk all the time.

Where I thought that the story faltered is in the light suspense sub plot involving a stalker terrorizing Molly. I also thought that given the gossip of a small town that these “stalker” incidents were underplayed by the town message machine. There were a few other plot holes, particularly in the end of the story, but it was so minor that it didn’t detract from my appreciation of the story.

The emotional conflict was so well done. When Molly’s secret comes out, Ben is understandably upset and Molly is understandably apologetic but the conflict and the resolution was realistic, humorous and endearing. The small town setting was well woven into the conflict. Mostly, though, I felt that the story served up heaps of freshness. Molly and Ben were different protagonists with Molly being the sexual aggressor from time to time. Molly actually makes friends with another woman. Ben isn’t a he-man but is instead dominant without being domineering. Altogether, it worked on nearly every level for me. B+

→ Jane
Previous article: How to Convert an eBook into eReader Format for the iPhone Using Publish eBook
Next Post: Generational Divide Poll