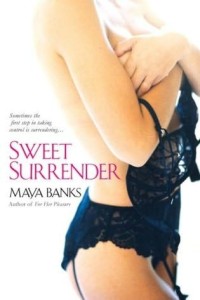 The setup for this book, a cop determined to find the killer of his partner and a woman seeking to find her sexual identity, got immediate placement in the plus column. Essentially, Sweet Surrender passes the eyeroll test. At least at the start.

Grayson Montgomery lost his best friend and partner, Alex Winslow, in the line of duty. Only the Dallas Police Department believe that Alex brought about his own death. Gray and Alex’s father, Mick, are determined to find Alex’s killer and bring him to justice. Mick believes that the cop killer has taken up with the mother of a Houston woman, Faith Malone. Faith’s adopted father runs Malone and Sons, a security outfit. Gray gets a part time job with Malone and Sons and proceeds to make friends, bug phones and spy on Faith, waiting to see if Faith will lead him to the killer.

Faith, oblivious to Gray’s motives, finds herself attracted to the new hire and attempts to flirt with him. Her efforts aren’t completely shot down but neither are they completely welcome. Faith has come to a realization in her life that her sexual needs are outside the mainstream and she begins to search out resources that might fill her need to be dominated.

Gray’s conflict is the deception that brings him into Faith’s life; this provides a small barrier to consummation of their attraction. For me, the more interesting journey was Faith’s discovery of her sexual identity. The story opens with Faith breaking up with her boyfriend after another insipid bout of sex. When she admits what she is truly looking for in the bedroom, the boyfriend is not disgusted but instead realizes that their sexual desires are not on the same path. This was just the first in a series of turns that the book takes which surprises me. There was no demonization of either Faith’s desire for sexual domination nor of the man who did not share that desire. How refreshing.

Faith doesn’t fight her attraction to Gray. In fact, she’s willing to explore it only to find that he’s reluctant to move forward. Instead of going home and pulling the covers over her head, Faith sets out to find her own fulfillment deciding that her attraction to Gray is simply that – an attraction, not the be all end all of her existence. The story shows Faith being aroused by other people, by the idea of new and different sexual prospects but ultimately she learns that Gray is the one that sets her world afire and she’s pretty proactive in capturing Gray.

The excerpt for this book that you choose highlighted another of the surprise turns. Faith is desirous of making an impact on Gray and corrals a friend and co-working into tying her up nude to Gray’s bed. The friend is a hot blooded man and he is readily turned on by this prospect. Faith is also turned on. While she is making a play for Gray, she is cognizant that her growing acceptance of her own sexual desires is exciting. This part of the story is told with no shame, no embarrassment but rather acceptance. Again, it was refreshing.

This story is not without flaws and it is these flaws that made it difficult for me to assign a grade. Faith is a bit of a Mary Sue in that she’s surrounded by a coterie of hot men who either want to bone her or protect her or both. There’s not a one who doesn’t think she is worthy of special treatment, greater than that afforded to other women. But there are no other women in this story. Faith’s life is testosterone filled and this is emblematic of stories of yours I have read in the past.

Faith also spouts off now and then about how women are becoming too masculine (my interpretation) in an effort to explain her desire for being dominated. The “reasons” that Faith give come off as offensive at times and there wasn’t any need to interject that agenda when so much of the story had not displayed the choice of being dominated as something that was “right” or “wrong”. It whittled away at the idea of the domination trope as normal and moved it into a quality of life choice depending upon a certain political or philosophical mindset.

The mystery/suspense was thin with Gray doing very little investigating other than bugging telephones and following Faith around. I also though that everyone, with the exception of Faith, too readily forgave Grayson for his deception. On the whole, even though I have wavered back and forth, I am going to give this a B-.

This book can be purchased in trade paperback or ebook format.