REVIEW: Super in the City by Daphne Uviller 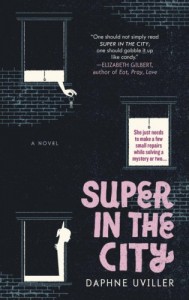 It was the back blurb of this book that caught my attention. The mob thinks the heroine is with the FBI. The FBI thinks she’s with the mob. And she’s dating an exterminator? After reading that I just knew I had to try this one.

Zephyr Zuckerman has a vivid imagination, four best friends from high school, a former asshole boyfriend she’s still not over and at age twenty-seven, still hasn’t made up her mind what she wants to do when she grows up. In the meantime, her parents have hit on something to occupy her time and save them some money. After the long time super of the small apartment building they own is arrested on charges of taking kickbacks from an oil company – and honestly how could that be a lot of money since there are so few tenants there? – they suggest that Zephyr take over his job.

A strangled, “What?!” is her initial response. She’s never dealt with stopped up sinks, unlocking the garbage hold, identifying unknown smells or allowing an exterminator through the building. It’s mainly the guilt over the money her parents have tossed down the drain funding her various attempts at grad schools that gooses her into agreeing to it. Now she’s the one getting the early morning phone calls from the neurotic old lady in the garden apartment. Oh yeah, and trying to figure out the exterminator who definitely doesn’t look to anyone like he’s an exterminator.

However it’s Gregory who actually discovers the mysterious secret staircase leading between two of the apartments which kicks off the whole bizarre FBI/mob mix-up. Well, that and the fact that Zephyr and her friends have a habit of crashing parties for free food and Zephyr has been called upon to do her civic duty.

I’m sure you’ve heard the phrase “only in New York” and it’s the one which came to mind the whole time I was reading the book. Not only because of the ultimate way the plot winds up but also because of all the details of life in the city you include. I’ve never lived there, never even been there but I can see the stores, bars, hotels and places Zephyr and her friends grew up in and around. I can hear the accents, smell the food and feel like I need to dodge out of the way of dog walkers with their fourteen charges.

And even while the plot languidly spooled out, gathered steam then hauled ass to its conclusion, I was laughing my ass off as Zephyr daydreamed about the tales she would tell her children of how she cute-met their various fathers. And how she and her girlfriends recoiled in horror at the apartment that the ex-super treated like a petri dish – definitely double glove before going there. And as she tried to figure out who and what Gregory really is.

Zephyr shares a lot with other Chick Lit heroines – mid twenties and drifting through life, sucky job, repugnant ex-boyfriend, close gal pals and a hero who baffles her before they finally work out their HEA – but she – and the book- are also genuinely funny unlike a lot of the pratfall filled Chick Lit books I’ve struggled through in an attempt to recapture the joy of the first ones I read years ago. This is a book I’m glad I got in my bimonthly care package from Jane and one I know I’ll probably read again. B+

This book can be purchased in trade format from Amazon or ebook format from the Sony Store and other etailers.