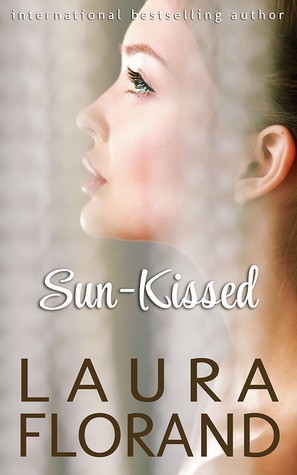 Sun-Kissed unites two Florand worlds, that of the “Amour et Chocolat” series and that of the novella Snow-Kissed. (Reviewed here.) I was tickled that it also unites the Hershey-ish character with the Martha Stewart-ish character.

In Snow-Kissed, the off-stage Anne Winters represented the Snow Queen — not exactly evil in that version, but cold and remote, seeming to care more about perfect decorations and crafts than about her family. This book gives her a broader emotional life, as the family friend of the Coreys, who stepped in to help with the things she does best after the death of of chocolate mogul Mack Corey’s wife. (“The family had fallen to pieces. Anne knew how to pick up pieces. Carefully. Trying not to get anyone cut on them.”) For Mack she’s been a walking partner, business soundboard, date to keep eager young women at bay, constant source of unexpressed sexual fantasies, and generally his best friend:

The friend who had kept him centered for the past fifteen year. Ever since Julie died. Or maybe he should say the past thirteen years, because for those first couple of years after the car accident, he sure as hell hasn’t counted as centered, no matter how many elegant variations on comfort food Anne carried over in their exquisite packaging, in her version of caring.

She was persistent at it, caring. She wasn’t good at it. She couldn’t hug or emote like Julie had. But she kept at it.

They’re the same age (53), both very successful and powerful, and both feeling a little lost, with their children grown and finding happiness with others. The story opens at the wedding of Mack’s daughter Jaime, the heroine of The Chocolate Touch; it’s also shortly after Anne has been released from prison, where she served 6 months for insider trading. The experience has changed her:

…she’d known that she wouldn’t have any trouble with at least one of those prison tips she had found online: never, ever show them anything you really feel, not fear, not weakness, not joy. It could all be used against you. She’d gotten that part down so very long ago, layer after frozen layer separating herself from the world’s power to hurt her, accumulated year after year as she kept doing it, as no one ever broke through.

But prison had weakened something in her. She knew it had. Because now some other part of her melted under [her daughter-in-law] Kai’s laughter, surging up in this sudden geyser of grief for herself and hope for them…

Seeing all the loving couples around her at the wedding furthers this “weakening.” “How do women manage that? That’s all I want to know. All those women, so relaxed and trusting, all around her.” Anne has closed herself off from romance for decades, after multiple miscarriages and a divorce, but she’s now starting to think about how well she and Mack are matched:

He was the most powerful man in the room, easily. And he knew it. He knew how to dance, and he knew how to control her. But if she wanted to do something — a spin or a dip or just shift the direction to another part of the room so she could catch the caterer’s attention — she could give just the tiniest little signal with a pressure of her hand or a subtle leaning of her body and he would do it. He teased her about her need to lead, but what really happen was that, without losing his control of the dance, he acknowledged her control, too. And it never seemed to lessen his confidence in himself at all.

Anne’s prison sentence was also a kick in the pants for Mack, whose wealth and influence still couldn’t save his dearest friend. Now realizing how much he needs and desires her, he decides to trust that their friendship could survive an attempt to make it more.

I loved how we get to understand these characters, previously seen only through their children’s sometimes conflicted eyes. Anne’s need to make places and things special is shown with much more empathy here, as is Mack’s type A aggressiveness.

Sun-Kissed isn’t the tearjerker that Snow-Kissed was, but infertility continues to be a theme. Anne suffered from secondary infertility (a situation that generally gets very little respect or understanding) and still has sadness around that, especially with the realization that she may never have grandchildren. She has an awareness not often seen in romance novels: “How easily people assumed something so magical would happen. How easily they took for granted that it you wanted kids, they would come.” Although quite a lot of time is spent on happy couples from all the previous books here, there’s no barrage of pregnancies and children; the one pregnancy is meaningful to this story, because it’s painful for the infertile characters to witness. Another awareness not often seen in romance novels.

I did think the past couples were over-present, although they do provide humor: ‘Do you know that a group of French chocolatier-pastry chefs who have never grilled a burger in their lives will still find ten ways to suggest a better technique? No, I have not tried balsamic vinegar, or bison, or an olive tapenade.’ And as previously mentioned, their presence affects the main characters. But Mack and Sarah think about them all a lot more than seems necessary or useful, other than to reassure fans that everyone they care about is happy. Consequently, the book feels uneven and is probably not the best entry to this world.

Although that aspect felt off-balance, the use of ice and melting imagery for Anne’s story was graceful and not overpowering:

So strange to realize that this blunt, tough businessman, with his square hands and his impossibly intense need to dominate the world, had this much tenderness in him. She’d known he had that much love — she’d seen it with Julie, with his children — but it had never even occurred to her that he could be capable of such a delicate touch.

It turned her delicate, too. It made her feel like a snowflake resting on a human palm, struggling not to lose her shape.

It was lovely to see a happy ending for the Snow Queen. It might be a trend. ;-) B