REVIEW: Strokes of Genius: Federer, Nadal and the Greatest Match Ever Played by L. Jon Wertheim 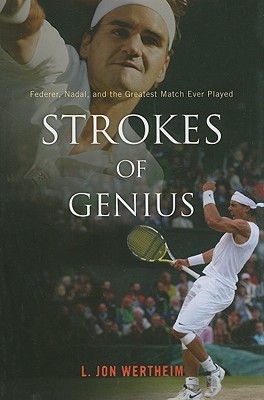 In the 2008 Wimbledon men’s final, Centre Court was a stage set worthy of Shakespearean drama. Five-time champion Roger Federer was on track to take his rightful place as the most dominant player in the history of the game. He just needed to cling to his trajectory. So in the last few moments of daylight, Centre Court witnessed a coronation. Only it wasn’t a crowning for the Swiss heir apparent but for a swashbuckling Spaniard. Twenty-two-year-old Rafael Nadal prevailed, in five sets, in what was, according to the author, “essentially a four-hour, forty-eight-minute infomercial for everything that is right about tennis—a festival of skill, accuracy, grace, strength, speed, endurance, determination, and sportsmanship.” It was also the encapsulation of a fascinating rivalry, hard fought and of historic proportions.

In the tradition of John McPhee’s classic Levels of the Game, Strokes of Genius deconstructs this defining moment in sport, using that match as the backbone of a provocative, thoughtful, and entertaining look at the science, art, psychology, technology, strategy, and personality that go into a single tennis match.With vivid, intimate detail, Wertheim re-creates this epic battle in a book that is both a study of the mechanics and art of the game and the portrait of a rivalry as dramatic as that of Ali–Frazier, Palmer–Nicklaus, and McEnroe–Borg.

I had started following tennis more carefully a couple of years ago, maybe even less than that. Some members of my family play pretty well on the recreational level and always enjoyed watching the competitions so eventually it sucked me in and of course I became fascinated by the Federer and Nadal rivalry. I probably like Nadal a little bit more, but only because I saw him on the court first. I have nothing but deep respect for Federer and consider myself fortunate that for few years at least I may be able to watch these two genius athletes play.

I obviously didn’t watch this match when it was played, but I wanted to read something about this rivalry and this book fit the bill. I really liked it. I am not a very visual reader, but I thought that the writer portrayed the picture of the actual game really well. The summary of the match was detailed – the chapters are named after sets, but he often went through the games shot by shot and it was exciting and very readable. I am very far from being an educated tennis fan yet, but it did not matter. The great game was played on the pages of the book and I was able to see some of it.

“The producer got a similar message from Michael Stich. The 1991 Wimbledon champ had been broadcasting the match for BBC Radio, but he was ready to walk out of the studio. “I want to go into the crowd and start yelling!” he exclaimed. “I’m working for you, but I want to be a fan!” Serving at 5–6 to stay in the match/ tournament/ tennis hierarchy, Federer played a clinical, efficient game. Relying on muscle memory, depriving himself of the opportunity even to consider the stakes, he pounded away at his serve and forehand, forcing still another tiebreaker.

It was Virginia Wade, the last Brit to win Wimbledon, who once described Centre Court as having the personality of both an august grandmother and an exuberant teenager. Here was a vivid illustration. Swiveling their heads in unison as they followed the ball, the fans watched points in dead quiet, the acoustics limited to the sounds of racket hitting ball, shoes squeaking on grass, and Nadal’s eeeaaaaaHHHH-UUUUGGGGhhhhhh grunting. As soon as the point ended, Centre Court came to rival any sports coliseum filled with apoplectic partisans held in thrall. The competing cheers of “Roger!” and “Rafa!” mixed with rhythmic foot-stomping formed a sort of cacophonous symphony.””

The writing just worked for me. As I said the writer mostly wrote about the match itself but he weaved in so many fascinating facts which may have been well known to better educated tennis fans but which were still unknown to me – some biographical facts, but also about tennis equipment, about television coverage and some other fascinating things.

I really do like and respect both of these men and honestly, besides enjoying watching them playing, I also like how they behave on the court not just towards each other, but towards other adversaries. I don’t find friendly rivalries boring; I find them more enjoyable than bitter ones.

“The more time Federer and Nadal spent together, the more they grew genuinely to like each other. For all their surface differences and the language barrier, they discovered plenty of common ground: a sister who shuns the limelight, a comfortable and conventional family upbringing, fond feelings for an understated hometown, a love of soccer, a similar sports code, a shared sense of how a top athlete ought to comport himself.”

As I said, I felt that the writer brought all the threads in his story back to the match itself really well. Truly it read as a well paced novel. Recommended.