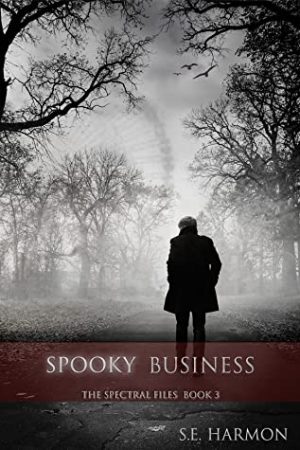 Being insatiably curious is a good way to end up dead.

Rain Christiansen, cold case detective and reluctant medium, is very aware of that fact. But when infamous serial killer Thomas Kane wants to meet, there’s no way Rain can say no. He also can’t refuse Kane’s offer—find his missing wife, Delilah, and he’ll reveal the location of his victim’s bodies.

Rain has never turned down a good quid pro quo, and he doesn’t intend to start.

The hunt for Kane’s wife leads to yet another cold case, three copycat murders, and an investigation where nothing is as it seems. Soon, Rain is dealing with a ghost unlike any he’s ever dealt with before…a ghost capable of doing things he shouldn’t be able to do. How can Rain control something he doesn’t even understand? And what will he do when the unknown threatens the safety of the most important person in his life?

I reviewed the first two books in this series and I enjoyed both. I did enjoyed the third book as well, even if with a couple of niggles.

Danny and Rain continue to navigate the pitfalls of a life together, dealing with the parents who live too close and the parent who is having trouble letting go.

““Fairies?” I scoffed. “Really, Mother.” “My fault. Let’s stick to the real stuff like ghosts, right?” My mouth quirked at her dry tone as she put another stone in my hand. It was deep green and oval-shaped. “Point taken. What kind of stone is this?” “Jade. It’s one of the most powerful stones against psychic and magical attacks. In the right hands, it can amplify your power and counterattack the sender.” “I’m not Harry Potter,” I said tartly. “Generally, I don’t get into many wizard battles.””

Of course the case they are dealing with involves ghosts again. I will be honest, I am not sure what I thought about the case. I mean I loved that the guys had things to do besides romance and family life – I am all for romance in my favorite stories, but I want to see the men being occupied with something else as well in their lives and Rain and Danny kept delivering in that department.

However I cannot quite pinpoint why the case itself felt a little off to me. I mean I can name one reason and I suspect the editor of the book nailed it too because in the foreword, the author shares that the editor suggested a chart of the characters and man, I think the editor gave excellent advice. It is not as if I was very confused, but I was *a little*. Several times when a new name popped up I had to stop and think wait, who is this now? The chart came in handy, although I am still not sure why it had to be placed at the end of the book – it was not really spoilerish in my opinion.

Again, do not get me wrong this is not “War and Peace” (and I love “War and Peace”), but twenty (if I counted correctly) new characters was still a lot. The bigger issue was not how many new characters we got introduced to, but I suppose I just expected a more logical case and investigation development. This I cannot reveal without spoilers, but some characters’ actions and motivations made me scratch my head.

Having said this, I still loved that in the course of the investigation, Rain gets a much bigger hold on his ghost handling abilities. I loved how he and Danny got to deal with their insecurities and move forward in their relationship. At some point in the book Rain, decides that to keep a certain secret from Danny would be a good idea. I did not think it was a good idea at all, of course, and was ready to wonder why the author would make him do it. Yes, I know real people act stupid at times in their relationships, but no I don’t think it is a sufficient explanation for the fictional character and if stupidity is that explanation I would have liked to see a stronger reasoning for that.

Luckily I was wrong, the author did not let that drag for too long, I liked how both men dealt with it and I think that helped them in the long run to become a stronger couple.

I also loved that Rain remained a wise ass throughout the book, but also that he became more open in his love for Danny.

“I enjoyed staring at him while he slept. Admittedly, it was my creepiest behavior by far—and that was saying quite a bit—but I had my reasons. Simply put, he viewed the world through cautious lenses and whether that was from his years of police work, or foster care, or maybe a combination of both, I didn’t know. But, understandably, he was a wary sonofabitch. When he was sleeping, his face was so open and honest, his features relaxed… I might even use the word sweet.”

The book is available on Kindle Unlimited.