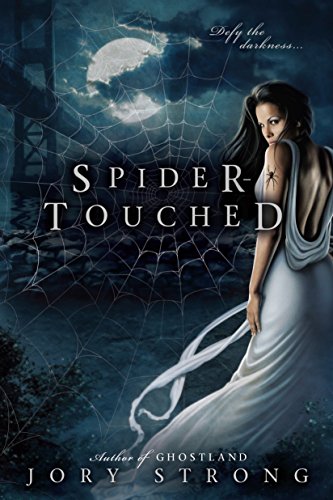 I like this book and I think it has great worldbuilding, but my big takeaway was “if I never read cuntlips again, I’ll die a happy reader.” On to the story.

Spider Touched is the second in the urban fantasy series started with Ghostland. I think that my understanding of this complex world was aided by my having read Ghostland. For those not familiar with the series, some of the world building concepts might be confusing.

AraÃ±a is a seer with a curse or gift, depending your point of view. She has the mark of a spider that migrates over her body. The mark is lethal and provides both protection and isolation. Protection because no one can touch her against her will and isolation because she cannot control the mark, making her poison for any loved one. AraÃ±a found a home with two gentlemen who are a type of privateers and have prices on their head. Erik has contracted a terrible illness and so, risking their lives, the three dock in Oakland to seek help. AraÃ±a finds herself alone, separated from Erik and Matthew, and soon she is captured.

Tir is a demon who has been bound through the years to different masters, coerced to do their will. He has one thought and that is to wreak revenge upon those who have sought to use him for their own means.

I thought that there was some play on the concept of submission but it was never fully formed. In other words, Tir who has spent his whole life answering to others wanted dominance over AraÃ±a. At some level, AraÃ±a and Tir are emotionally simplistic. Both burn for revenge, but AraÃ±a’s is touched by the need for affection while Tir is more focused. They both work together to find the key to the sigil-inscribed collar that controls Tir’s life.

There were many concepts that overlay the story: the churches hunt against the gifted, a type of colliseum-like entertainment where the gifted are forced perform to the death for the non gifted, the conglomeration of gifted includes vampires, shapeshifters, demons, angels, witches, (and probably more I am forgetting).

Many of AraÃ±a’s successes in this story are convenient. For example, she knows how to win the gifted gladiator entertainment event because she had met someone in her past had told her so many times about his run through the maze and subsequent escape that she captured the maze in detail on paper with ink and lead. Conveniently, AraÃ±a’s poison is nothing against Tir for he is Spider Touched in his own way.

The alternate world of Oakland with its complicated politics and magic is well drawn and each time I open these stories, I do feel transported into an entirely different dimension. These stories are a true blend of romance and urban fantasy because the conflict between AraÃ±a and Tir rests, in large part, upon the worldbuilding premise itself. In other words, you cannot take AraÃ±a and Tir out of this world setting and into a different setting and have the same dynamic. The mystery of AraÃ±a’s curse and Tir’s captivity provides the impetus to move forward through the story.

I make this recommendation qualified because there are many flaws but the blending of UF with romance is really well done and I don’t see a lot of this type of fantasy romance tale on the market.   It’s dark and death seems imminent on every corner.   I do think that this is a series that should be read in order because some of the worldbuilding in book 2 could be a spoiler for book 1. There is something building as the power struggle between the higher beings sees itself played out in each individual coupling. Knowing what the power struggle is can be a spoiler.   B-

This book can be purchased in trade Amazon or in ebook format from Sony or other etailers.