REVIEW: Sold to a Laird by Karen Ranney 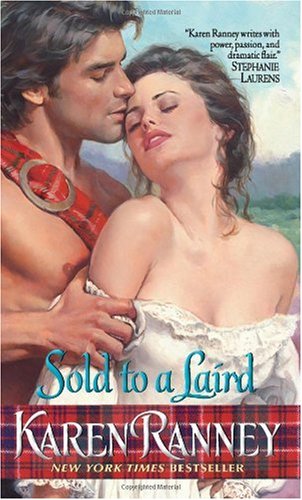 I confess that the title of the this book was a bit offputting (not to mention factually inaccurate for the story).   I was initially put off by the title and the blurb but the book was sent by the publisher and after the first chapter, I was very interested in what came next.

Douglas Eston has changed his life from poor pickpocket to wealthy investor and scientist (thus no Laird).   He has developed a process by which he can recreate diamonds and he goes to the Duke of Herridge to offer Herridge an opportunity to invest in Eston’s business venture.   As Eston is meeting with Herridge, Lady Sarah Baines arrives to confront her father.   Sarah’s mother is very ill and Herridge is threatening to send them both to her mother’s family in Scotland.   Sarah knows that her mother, Morna, will not survive a journey.   She despises her father but is willing to abase herself, beg in front of this stranger to keep this trip from occurring.

Douglas is completely engaged by this confrontation.   He is not made uncomfortable by the family contretemps, instead he is arrested by the spectacle and particularly impressed with the strength of Sarah Baines. Her father, without acknowledging Sarah or her pleas, continues to speak with Douglas, offering him Sarah’s hand in marriage. When Sarah protests, her father tells her she can either marry Douglas or move her mother to Scotland.

Douglas has this instant attraction, not a physical one, but an emotional one. Some may call this love at first sight and the reader must buy into this in order for the romance to work. I thought you did a good job of selling Douglas as a bit of a romantic. I didn’t completely understand Douglas’ motivation. I thought it could either be related to the fact that Douglas’ life was changed in an instant or because Sarah needed saving like Douglas needed saving so many years ago.

Sarah is an unwilling bride and Douglas disarms her by not only acknowledging that she is right to be unwilling but that he plans to set out to woo and charm her. Sarah is her father’s daughter. Douglas points out that for all that she hates her father, she spouts his lessons and comports herself to the model that he prescribed. She often refers to herself as “the Duke of Herridge’s daughter”. Her life is defined by being a Herridge and besides being devoted to her mother, she is bound to the Herridge estate. Everyone defers to her to the point that the servants often slack off, allowing Sarah to take on more and more of the responsibility.

When Sarah is unable to attend to the Estate’s duties, Douglas fills in. He makes changes by telling others that they must live up to their duties and not rely so much upon Sarah. Douglas doesn’t fix things for Sarah or take control over her domain, but merely shifts some of the burden off her own shoulders.

Douglas’ wooing reaps quick success. Part of the story moves to Scotland and while there were hints early on that Scotland might play an important part, I found this part of the story, while entertaining, to be more filler. Sarah’s devotion to her home, like her opposition to Douglas, seemed to fade into the mist.

At times I thought the portrayal of Herridge as inconsistent. He’s written as a flittergibbet, worried about no more than how to look fine and live fine. The effort in which he goes to maintain his lifestyle seemed at odds with his intentional and heartless cruelty. He seemed to put so much effort into beating down others. I was also completely taken aback by the ending scene which I thought was quite over the top and did not fit in with the tone of the previous chapters.

I did think that there were a lot of details that fleshed out the relationship of Douglas and Sarah as Sarah began to enjoy the companionship and partnership with Douglas. Douglas remained fairly static throughout the story. The prose is lovely and the romance was satisfying. B-

→ Jane
Previous article: REVIEW: An Improper Holiday by K.A. Mitchell
Next Post: If You Like …. Holiday Stories