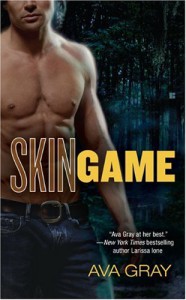 In reviewing my emails (because my memory, as you know, is terribly spotty), I see I received the book for review from you. I had enjoyed Grimspace and heard that this book was fresh for the romance genre and it is. Kyra is a grifter, working with her father, until he is beaten and left for dead by a casino owner named Serrano. Kyra runs a long con on Serrano, not just to take his money, but to humiliate him. She does this by learning what Serrano likes and transforms herself into the perfect woman, luring him in, and then ultimately humiliating him by gambling away his engagement ring, taking his money, and publicly admitting she just dated him for the money.

Serrano has his security guy hire a hitman to retrieve the money and kill Kyra, in that order. Reyes is one of the best but he’s a hitman with scruples. He is meticulous about who he kills and for whom he kills. He agrees to take down Kyra because she allegedly killed her father. A woman that kills her father needs killing herself in Reyes’ mind. Foster, the guy who hired Reyes, didn’t have a long history with Reyes and so it seemed a little farfetched that Reyes would just accept the “report” given to him, as if that was sufficient to whitewash his kill. Reyes is set up, curiously, as a one man judgment squad. He decides if you are worthy of taking out based on the information provided and he takes you out. Reyes realizes later he’s been lied to by Foster by I wondered how often he has been lied to. It’s not something Reyes even considers.

Kyra and Reyes have convenient morals. Kyra only screws over bad people and Reyes usually only kills bad men. Bad being relative here. They both don’t like drug dealers and at one point burn down a meth lab. Later they take a bad drunk/drug dealer on the side for a little con. Like many cons or morally ambiguous characters, they are good people to the core. Their justifications somehow make them all good. Whether that’s a realistic view of things or not, it’s how the story is played. And for all Kyra’s “wickedness” as Rey would put it affectionately, she still reads fairly innocent.

Admittedly, Reyes is pretty heartless. There is some sort of perverseness in Reyes character that he would have sex with someone he planned to kill. Later in the story, we are shown a real streak of ruthlessness. In the end, Reyes loves only Kyra. She’s his lodestone, and, I imagine serves as his conscience in the future.

There were other things that niggled such as Kyra so easily accepting Reyes as a partner. For someone who was on the run, this seemed improbable and quite stupid. She never even once thought that Serrano was out to get her; that Reyes somehow just so coincidentally shows up in two backwater towns hundreds of miles apart.

The sexual tension is really well done and after a wild romp in the bed, Kyra considers whether to break her no second night rule. It’s inevitable that she will, but the delicious tension that overlays the wait adds spice to the story. I was surprised at how sexy the book was but it fit with the danger. The adrenaline rode the two of them hard, particularly after a fight. I thought the romance was particularly well down. You really see how these two fit together.

They both knew each other’s flaws. I think this is why the con/killer setup worked so well. Neither was a deceived innocent.

Reyes ground his teeth. Something dark and primitive swept over him at hearing this asshole practice his sloppy endearments on her. It was all Reyes could do not to punch the son of a bitch in the face, which told him he had a problem. No wonder she’d played Serrano-‘and so well. Kyra was a pro, all right, well schooled in manipulating a man’s emotions. And that made him twice the fool-‘because even knowing what she did, he found himself susceptible.

Toward the latter half of the book, it really lights up. Kyra and Reyes fall for each other. For some reason Kyra begins to trust Reyes. For Reyes, Kyra is like no other. Her gift for the con, her matching scruples, her wicked ways all allow him to dream of a perfect kind of marriage, not in the white dress church style, but of the matching of hearts and souls.

As the two travel along, Kyra biding her time and Reyes trying to figure out if he kills her or scotches his perfect reputation and throws in with her, the story grows darker and darker. Kyra and Reyes are some kind of Bonnie and Clyde with the bad guys trailing them making things worse and worse. When the truth comes out on both ends, Reyes realizes how close to heaven he touched with Kyra now that he’s lost her and Kyra who is sick with shame over being duped and in bed with an assassin.

This book is very edgy and I appreciate the risks that it takes with the genre itself. It’s dark and the characters aren’t always doing likeable things. There is no questioning of morality in this story. You take the characters as they are. Everyone in that group of grifters, drug dealers, killers, thieves, have a differing take on the right v. wrong thing. Living up to your reputation, making sure you don’t harm those who don’t deserve it. That’s the code by which the characters of this book live. Trusting someone is the hardest thing to do, the most vulnerable thing to do. These emotions were well conveyed by both characters and while some of the contrivances that worked to bring Kyra and Reyes together made the earlier part of the book less believable, the romance made up for it. B-

→ Jane
Previous article: REVIEW: Memoirs of a Hoyden by Joan Smith
Next Post: The Rake