I’m not addressing this review to Mr. Coben because the guy’s one of the world’s top-selling suspense writers–he was the first to win all of three of that genre’s top awards: the Edgar, the Shamus, and the Anthony. It seems unlikely he’ll see this review.

I like Mr. Coben’s books especially his stand-alones. This is in part because, in some ways, he and I live in the same world. We’re both in our early 50’s, white, married to physicians, graduates of well-known colleges, parents of four kids, and, yes, privileged. The characters in his books have decidedly first-world problems; the bad things that happen to his characters are often extreme versions of things I fret about: the safety of teenagers, the dangers internet exposure can bring, the secrets that splinter seemingly secure relationships. His books espouse the view that life’s greatest rewards are found in connections with others, especially those forged with old friends and family. This works for me.

The hero of the novel Jake Fisher, a fetching poly sci professor at a school that strongly resembles Mr. Coben’s alma mater Amherst, tells us in the book’s opening lines there’s only one woman for him.

I sat in the back pew and watched the only woman I would ever love marry another man.

Natalie wore white, of course, looking extra mock-me-forever gorgeous. There had always been both a fragility and quiet strength to her beauty, and up there, Natalie looked ethereal, almost otherworldly.

She bit down on her lower lip. I flashed back to those lazy mornings when we would make love and then she’d throw on my blue dress shirt and we’d head downstairs. We would sit in the breakfast nook and read the paper and eventually she’d take out her pad and start sketching. As she drew me, she would bite down on her lip just like this.

Two hands reached into my chest, grabbed my brittle heart on either side, and snapped it in two.

Why had I come?

Do you believe in love at first sight? Neither do I. I do, however, believe in major, more-than-just-physical attraction at first sight. I believe that every once in a while—once, maybe twice in a lifetime—you are drawn to someone so deeply, so primordially, so immediately—a stronger-than-magnetic pull. That was how it was with Natalie. Sometimes that is all there is. Sometimes it grows and gathers heat and turns into a glorious inferno that you know is real and meant to last forever. 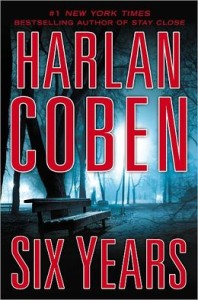 Jake and Natalie met at while at neighboring artist retreats in Vermont. After three months of bliss, out of the blue, Natalie tells Jake she is marrying an old boyfriend and, if Jake loves her, he will leave her and her new husband–“us”–alone. She made Jake promise; he did so and he does.

Until one day, while holding office hours and shooting the breeze with one of his students, he sees on the school’s home page an obituary for Dr. Todd Sanderson, the guy Natalie married. Jake hightails it down to Florida to Sanderson’s funeral because a dead husband means no more “us.” When he gets there, however, things immediately make no sense. The guy Natalie married is indeed being buried but the grieving widow isn’t Natalie. It’s the dead man’s high school sweetheart to whom he’s been married to for years.

When Jake calls Natalie’s sister to ask what the hell is going on, the sister says she has no idea who this Jake is and he’d better not ever call her again. Determined to find Natalie and find out the real reason she left him, Jake next goes to the town in which he and Natalie met where everyone he meets says not only do they not recall him–he knows they’re lying–they tell him the artists colony Natalie was at when she and Jake first met never existed. Jake begins to suspect something rotten is behind Natalie’s disappearance from his life, a suspicion confirmed when he is tailed as he drives back from Vermont.

Mr. Coben is a superb suspense writer. He wastes few words here and though the reader gleans early the overt reason Natalie vanished, the specifics of that remain tantalizingly out of reach. Everyone Jake talks to, indeed every conversation he has, leads inexorably to the novel’s tense climax. This is one of those thrillers that, as soon as I finished it, I read it again just to see all that, though right under my reading glasses, I’d not understood the significance of the first time around. Six Years is not Mr. Coben’s best novel–my favorite is Hold Tight although many love his Myron Bolitar series–but it’s a well-crafted, exciting read.

I would not recommend, however, that Mr. Coben abandon suspense and take up romance.

Jake, who narrates the novel, is an appealing hero. He’s wry, intelligent, amiable, and sexy. Women of all ages find him charming–it doesn’t hurt that he’s tall and built. He knows it, too, but never uses his sway unethically. Here, a female student has just unsuccessfully petitioned him for a higher grade on her paper.

We both stood from the big oak table and shook hands. She held mine a second longer than she had to so I disengaged intentionally fast. No, this doesn’t happen all the time. But it does happen. I’m thirty-five now, but when I first started here—the young professor in his twenties—it happened more often. Do you remember that scene in Raiders of the Lost Ark where one student wrote “LOVE YOU” on her eyelids? Something like that happened to me in my first semester. Except the first word wasn’t “LOVE” and the second word had been switched from “YOU” to “ME.” I don’t flatter myself about it. We professors are in a position of fairly immense power. The men who fall for this or believe that they are somehow worthy of such attention (not to be sexist, but it was almost always men) are usually more insecure and needy than any daddy-issued coed one might happen upon.

He’s a deep thinker–even when being held at gunpoint–and an insightful amateur detective. But when it comes to Natalie, he’s clueless. As he analyzes their past, struggling to understand the present, it’s clear he never really knew the love of his life. He knew she loved him but who she was and what motivated her, these fundamental aspects of her, he never got. That leaves the reader wondering whether he was rendered intellectually comatose or whether the Natalie he loved was a fake. Neither choice smacks of true love.

The other problem with the love story is that the reader only apprehends Natalie through Jake’s narration. She’s an object rather than a participant. This distancing view of her makes it impossible to understand her. We know Jake will do anything to be with her but we never know her. It’s easy to quibble with the novel’s romantic elements. Mr. Coben didn’t set out to write a romance; he set out to write a damn good thriller.

But it is a romance. It’s a romance written by one of America’s best-selling suspense writers; it’s a romance seen only from the perspective of a guy who didn’t really understand the life of the love of his life; and, yes, it’s a romance written by a man who I dare say hasn’t paid any attention to the conventions of or expectations in the romance genre. At its end, I believed in Jake’s love for Natalie in the then and in the now. I give it a B+ as a thriller and a C as a romance.