REVIEW: Sins of the Fathers by Anna O’Neill

A short story set in historical Japan featuring warriors sounded interesting. Make that very interesting since there’s no paranormal element. I can do without a lot of paranormal. So I downloaded it and fired it up.

The weight of the past could tear them apart-

In his first mission as a shinobi, Sora Sanada has more than its success riding on his shoulders. Every move he makes is a reflection on his clan's honor. So when an unexpected scuffle leaves him injured and the mission in jeopardy, he'd rather be left behind-‘but his partner, the mysterious, masked Kaname, has other ideas.

Kaname breathes a silent sigh of relief when the younger, less-experienced Sora agrees to a plan to throw their enemies off their trail. As a member of the deposed Takeda clan, the last thing he needs is more disgrace heaped upon the family name should he lose the Sanada princeling.

His plan to disguise themselves as naked lovers is a rousing success in more ways than one. It sparks a bond that shakes them to the core-‘and the Shinano Province to its foundations-

First off, I didn’t realize it would be quite so short. The story formatted to 100 pages on my Sony 505 but when I got to the end, I discovered that about 20 pages of that 100 are excerpts for other stories. Had I bought this instead of getting it for review purposes, I would have been pissy at that point. Just saying… 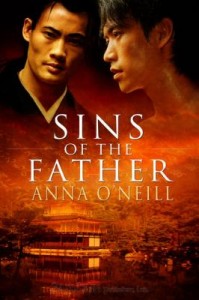 But on to more positive things. I like how Sora grows and matures as the story progresses. And how patient Kaname is with him while he does it. I remember being nineteen and thinking I knew it all. By the time I was thirty, I knew better. Kaname has a nice, disarming sense of humor and a way of dealing with Sora’s insecurities that, I think, comes with age and experience. By the end, Sora appears to be well on his way to maturing as a man as well as being a good warrior. Knowing how to fight can be trained; being a man must be earned.

The sex scenes are hot and intense. I enjoyed the ultimate playfulness of the first one but I wonder if Kaname is supposed to have historical Japanese Gaydar. How does he know that Sora will be receptive to his actions? Dunno but at least Sora is and we get some hawt manlove. The way the relationship moves from just physical attraction through actually letting another person get near to him emotionally works well for me. Perhaps they will make it to Edo and be able to put their pasts behind them.

I was disappointed that the great secret behind Kaname’s family disgrace is built up and built up then so lightly skimmed over. As for the historical details, well, there were just enough to give me some grounding in what you were presenting but I think there won’t be enough for people looking for a heavy dose of historical realism. For instance, I not even sure exactly when in time the story takes place. Since the title Edo is used instead of Tokyo, I know it takes place before 1868 but beyond that, I’m lost. But if you’re not going to go in depth, then I say stay at the level you did and give enough information to serve the needs of the story.

I liked meeting Sora and Kaname and watching them begin a relationship. Will there be future adventures for them as they head to Edo and try and stay one village ahead of those after them? I hope so. B