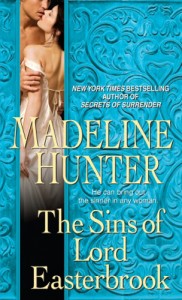 This is the last book in the Rothwell series which started off with Rules of Seduction. Christian, the eldest of the Rothwell brothers, has been an enigmatic figure throughout the series. He’s unconventional in his attire (often roams about his home on Grosvenor Square in a robe and barefeet) and is generally considered to be a recluse. In previous books you got the sense that part of Christian is not within him, that he left it behind somewhere or with someone.

Sins of Lord Easterbrook is an apt title because it refers to not only the current Lord, Christian, but his father, as well. Leona Montgomery has come from Canton to London to pursue an investigation started by her father over seven years ago which may reveal more sins of his father, particularly that related to opium trade. Leona and Christian shared something seven years ago when Christian had left his family to try to find himself, addicted to opium and too rich for his own good, he flitted from one place to another, landing in Canton where Leona’s father ran a shipping concern.

Whatever Leona and Christian had shared was put to an abrupt end when Christian was forced by Leona and her servant man, Tong Wei, to flee Canton after Christian had seen something that imperiled his life. Christian never went back to Canton believing that Leona would be marrying her fiance and yet, he never forgot her.

Leona does not know Christian is Easterbook. He presented himself as Edmund so many years ago, wealthy but untitled. She calls on his aunt and Christian sees just a glance at her through the window, immediately bestirring himself to confirm that it is, indeed, Leona.

The story takes time to unravel itself as Christian and Leona’s backstory is told in small references here and there. Further, the reason for their separation and their continued distance once they meet again takes some time to understand. For an impatient reader like myself, this can be very frustrating. Yet, I held my eagerness at bay and allowed myself to move with the rhythm of the story. It’s told at a languorous pace that in the hands of other authors might have been maddening. The use of language, however, is beautiful and understated that I just let go and allowed myself to appreciate the writing even though my preference is for a faster paced novel.

The story has an unexpected layer to it and while it was interesting, I thought it was occasionally artificial. It conveniently served as an excuse for Christian not to offer to marry Leona. They shared a misunderstanding about each other’s motives. I.e., Christian refuses to offer marriage to Leona believing she would reject him due to the fact she had spent 7 years running about the Far East as a trader. Leona doesn’t want to be a mistress to Christian and despairs of having his love. It was one of those wherein if the two would have just talked it would have immediately cleared the air. Christian’s reluctance to share the depth of his feelings seemed at odds with his penchant for revealing other previously untold deep secrets only to Leona.

I enjoyed Christian and Leona although I felt that Christian too often played the martyr. I appreciated, though, that Christian did not impede Leona’s investigation for the sake of deterring her, but for the fact that he was trying to make her stay in London longer, thus prolonging their contact. Leona was made out to be an interesting character, one who took up the reins of her father’s shipping interest upon his death because her brother was too young to do it. She has spent seven years, haggling, sailing, and taking risks other men would shy away from. Yet, the Leona that we see on the pages is not one of great command nor is she one who is a risk taker, at least not with Christian.

I admit to linking the first one the best in this series and this one second best. Since I gave Rules of Seduction a A-, and I thought this one was less successful in its execution, I have to give it a B-. This is not to say that I don’t think it’s a good read because it is, but I can see that some readers finding the pace of the book too slow and a bit too melancholy at times.