REVIEW: Simon vs the Homo Sapiens Agenda by Becky Albertalli 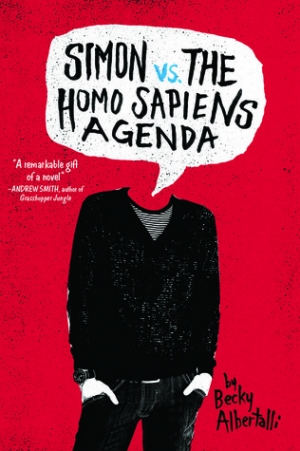 Everybody is talking about Simon vs. the Homo Sapiens Agenda!

“A remarkable gift of a novel.”—Andrew Smith, author of Grasshopper Jungle
“I am so in love with this book.”—Nina LaCour, author of Hold Still
“Feels timelessly, effortlessly now.”—Tim Federle, author of Better Nate Than Ever
“The best kind of love story.”—Alex Sanchez, Lambda Award-winning author of Rainbow Boys and Boyfriends with Girlfriends

Sixteen-year-old and not-so-openly gay Simon Spier prefers to save his drama for the school musical. But when an email falls into the wrong hands, his secret is at risk of being thrust into the spotlight. Now change-averse Simon has to find a way to step out of his comfort zone before he’s pushed out—without alienating his friends, compromising himself, or fumbling a shot at happiness with the most confusing, adorable guy he’s never met.

Incredibly funny and poignant, this twenty-first-century coming-of-age, coming out story—wrapped in a geek romance—is a knockout of a debut novel by Becky Albertalli.

I used to read a lot of YA m/m romance, but for the last year or so I have not been able to make myself pick up another book with teenage angst galore.  YA romance used to be the subgenre where I was the most forgiving of angst – teenagers will always be teenagers after all, but I suppose at some point I got a little tired of that as well.

However, I heard good buzz about your book and decided to see whether it lived up to it. I am very glad I did, because I enjoyed the story even though of course it had angst. I really liked the main character and wanted the best for him, and even at his worst I was thinking that I would not mind having him as a friend if I were back in my teenage years.

Simon has known that he is gay for a while, even though he has not had a boyfriend yet and his attempt to go out with a girlfriend in a middle school was unsuccessful. When we meet Simon he is emailing with a guy named Blue, and Simon strongly suspects that Blue is a student in the same school. Their emails to each other are a big part of the story, so I guess this is at least in part an epistolary novel.

Very early in the story one of Simon’s classmates tells him that he saw Simon’s emails (walked in on him in the computer room, I think) and took screenshots.  He asks Simon to introduce him to Abby, who transferred to their school a few months ago and has became good friends with Simon. This classmate has a crush on Abby and is trying to blackmail Simon in helping him to get closer to her.

Simon is unhappy but reluctantly agrees.  At the same time, his exchanges with Blue are getting more and more intimate, but both of them scrupulously avoid giving each other more clues about who they are in real life. Of course, some clues are slipping up from time to time.

Simon is also struggling with whether he should come out to his parents and friends – he lives in Georgia, and while the school technically has a zero-tolerance policy Simon does not feel it is a very progressive place. More importantly, though, while he knows at an intellectual level that his parents are not going to reject or abandon him (they are democrats and they are not religious people – those are Simon’s explanations by the way, and I am aware that it is way oversimplified), but he feels that he is changing constantly and that he has to “constantly reintroduce himself to the Universe”. Simon does not like change much, but because he is sixteen of course he is not going to get away from it.

So basically what we see in this book is Simon figuring out how he is changing, how he fits in the world around him, and what things remain the same even if some of the constants are changing too.

I liked Simon and his friends, and I thought his falling in love and trying to figure out whom he was falling in love with was nicely done.  I liked that even the bad guy in the story had his vulnerabilities and reasons. His actions were not justified by the narrative, but nobody was written off as irredeemable. All the characters felt real to me.

Part of the reason I stopped reviewing YA books this last year is that I started to worry that since I am further and further away from being a teenager (it has been happening for over two decades – it’s not like I just passed my teenage years ?) I won’t know whether the characters in these books sound and feel realistic, or at least as close to realistic as fictional characters can be.

The kids in this story felt real to me, whether they felt real to the teenage audience I would not know, but I hope enough younger readers enjoy it as much as I did.

→ Sirius
Previous article: Friday News: Tech edition, more or less
Next Post: DAILY DEALS: Vamps in a box, Waifs on the street, bodyguards at the ready