ewlywed Rachel Chapman Middleton has been living in her husband’s hometown, the sleepy college hamlet of Silver Falls, Washington, for only a few months when the body of a young woman is discovered. It’s an especially unwelcome shock for Rachel because she married David Middleton, a respected college professor, in large part to put another murder behind her and her daughter. 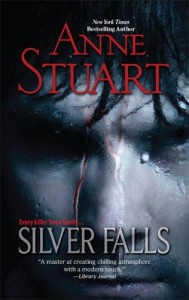 Rachel has been a single mom ever since she gave birth to Sophie at the age of seventeen. After her fundamentalist parents disowned her for giving birth out of wedlock, Rachel and Sophie traversed the world like nomads, finding a new place whenever the old one bored them. Rachel worked as a photographer, but the life on the go which she and thirteen-year-old Sophie so enjoyed came to an abrupt standstill when Tessa, a friend of Sophie’s, was brutally murdered.

Fortunately or unfortunately, David Middleton swept into Rachel’s life following Tessa’s death and offered Rachel the stability and security she felt her daughter desperately needed. David was Rachel’s rock in those days, a kind, caring man and a bulwark of safety. Rachel and Sophie relocated from San Francisco to Silver Falls, where Sophie has enrolled in a good school and made friends with the daughter of sheriff Maggie Bannister, and Rachel is now trying to conform to what is expected of her as a faculty wife.

The same day the body of the dead girl is discovered in Silver Falls, Caleb Middleton, David’s adopted older brother, also turns up. Caleb is a globe-trotting journalist and a black sheep, and Rachel is irritated by her attraction to him. According to David, Caleb has always envied him and tried to take what’s his, so it’s to be expected that Caleb would put the moves on Rachel. Caleb has a different viewpoint, but it’s clear even from his own thoughts that he has an agenda that influences his interactions with Rachel.

Is it a coincidence that Caleb appeared in Silver Falls the same day the dead body was found? Is the murdered girl’s resemblance to Tessa nothing more than a fluke? And what about Sophie’s similar willowy shape and blond coloring? Is Rachel’s daughter in danger? What about Rachel herself? Is she at risk of ending up as something worse than the bone of contention in a fight between the two brothers? Does the men’s father, Stephen Henry, know more than he’s letting on? And should Rachel take the advice more than one person has handed out and split town with Sophie?

Those questions are at the center of Silver Falls, an alternately entertaining, disturbing and frustrating book. I’m not absolutely certain whether or not we readers are intended to be held in suspense as to which man is the hero and which is a bad guy, but I suspect the answer is not, since I believe anyone who has ever read one of your books and even some who have not could spot the hero at twenty paces.

To allow readers to figure it out for themselves, I’ll just say that one of the Middleton brothers is quiet, meticulous, vegetarian, abhors profanity, has problems performing in the bedroom and gives Rachel’s daughter Sophie the creeps. The other brother is laconic, fond of swear words, lives in a disorganized dump of a house, hits it off with Sophie right away, feeds Rachel the burgers she craves and offers to go down on her. If it’s not clear to the reader which one Rachel should trust, then that reader hasn’t been reading your books for very long.

And that’s what makes the book frustrating: it’s obvious to everyone but Rachel. I haven’t come across a heroine who made me want to gnash my teeth so much since, oh, at least Isobel from Ice Storm two years back. If this book were a horror film, Rachel would be wandering alone in a dark hallway with a creaking floor, and we would be yelling at her to be more careful.

But Rachel is the kind of heroine who ignores her instincts when they are on the right track, and only listens to them when they are going haywire. “Are you in denial about everything?” the hero asks her at one point, and I wanted to shout “Yes!” I appreciate that in a suspense story, such a heroine can remain in peril for the entire book. The problem is that in a romance, I want to find something to admire in the heroine, or at least a reason why, even if I don’t admire her, the hero does. Instead, I find myself wanting to shake Rachel and tell her to wake up and smell the decomposing corpses.

I think what’s supposed to be admirable in Rachel is the colorful, bohemian life she has led up until she comes to Silver Falls. But she never manages to convince me that she is the footloose photographer who has lived in many countries, or that she was once the rebellious daughter of fundamentalist parents whose childhood ended with a teenage pregnancy. Rachel’s experiences prior to Tessa’s murder don’t seem to have marked her. She’s far too concerned with obeying the strictures imposed on faculty wives in Silver Falls (strictures which don’t, by the way, seem consistent with what I know of academic circles) to come across as unconventional or adventurous.

To the degree the book works, it works despite its heroine’s cluelessness. The hero (whose identity I won’t give away) is surprisingly sweet and endearing, so much so that I forgive him for the two obvious mistakes he makes. The love scenes, when they arrive after a long wait, are touching. There is a moody, creepy atmosphere to the rain-drenched Pacific Northwest setting, and Sophie and Maggie Bannister are both intelligent, perceptive and likable. Even the murderer is more interesting than most killers in this subgenre.

Lastly, there is your writing style, which I so enjoy. You have a rare gift for putting words together in a lean, potent way. The undiluted power of your language is something I appreciate very much.

It’s tough for me to weigh the pleasures of this book against the frustration it engendered in me. I’m not sorry I spent my money on it, and I did enjoy it, but I probably won’t read it again, either. In the end, I can only give it a grade which reflects my ambivalence. C+/B-.