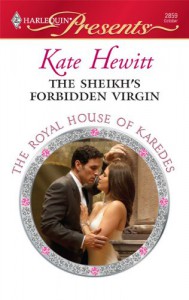 Thank you for sending me a copy of your book. The thing that stuck out most in my mind at the end of the story was how apt the title was. The story really was about the sheikh’s forbidden virgin. This is part of The Royal House of Karedes miniseries.   These series books generally don’t work for me because so much of the story is dependent on the overall arc.   Fortunately, while the miniseries theme and arc was present in this story, it didn’t dominate.

Aarif Al’ Farisi lost a brother when he was young.   He believes himself to be at fault for this and since that time, he has devoted himself to his family, allowing no room for failure.   His brother, King Zakari of Calista, is to be married to his betrothed, Princess Kalila Zadar and Zaraq.   Zakari and Kalila have been betrothed since they were young as the dynastic pairing will bring the richness of Calista to Kalila’s people and the stability of rule from Zaraq to Calista.

On the eve of Zakari’s arrival, Kalila’s father reminds her “Tomorrow is not about you, Kalila. It is not even about your marriage.   It is about tradition and ceremony, an alliance of countries, families.   It has always been this way.”   There could be no more emphatic punctuation than greeting Aarif the next day and not Zakari.   Zakari cannot come to retrieve his bride as his is off chasing down a famous diamond (and I presume falling in love with some other woman).   Instead, Aarif comes to carry out this duty on behalf of his brother because no task is too distasteful for Aarif on behalf of his family and the crown.

Kalila spent too much time in the West to accept these dictates meekly.   She knows what her duty is and she hopes that Zakari and she will come to love each other.   When he can’t even be bothered to meet with her only weeks before the wedding, she feels that such a relationship will be doomed.   Frightened, Kalila runs off into the desert prepared to spend a least one night away from the Palace and her duties.   She wants just a tiny reprieve from entering into this marriage.

Aarif is left to chase her down.   He knows that spending the night with her in caves in the sand will not only jeopardize her reputation, for a King’s bride must be a virgin, but it also tempts him beyond what is appropriate. She is his brother’s wife to be, one that is necessary for political reasons.   In the short time that Kalila and Aarif spend together, a forbidden longing between them develops.

Both Aarif and Kalila are bound by the obligations of their roles although Aarif clings more tightly to his.   He cannot forgive himself for the death of his brother and his devotion is his penance, one that he must keep paying.   Kalila, although mired in duty and family herself, seems ready to toss that all aside for Aarif, if he would but acknowledge their attraction.

Aarif’s forbidden longing for Kalila is very moving as is Kalila’s very real loneliness in the palace of Zakari who is still absent, even the night before the wedding.   This book suffered in its shortness.   I think it could have been even more emotionally gripping if Aarif and Kalila’s torment were more drawn out.   The ending was quite abrupt and didn’t match the overall tone of the story up to that point.   Still, there is no alpha asshole hero or doormat heroine.   Kalila’s actions, at times, seemed impetuous but it was certainly understandable in light of the cavalier treatment of her intended groom.   I love the unrequited love story and while both Kalila and Aarif had feelings for each other, their love was not supposed to be fulfilled.   B