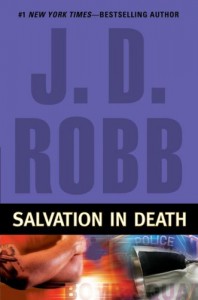 I’m of two minds about this book. The mystery was excellent. This was no thriller with marauding serial killers, but a police procedure story in which the principal officers unpeeled the layers of a crime step by step to find the surprising and somewhat convoluted truth. These stories also move on emotion whether its Eve’s constant struggle with her past or her relationship with Roarke, master of the universe. The emotional aspect of this story was, at times, a bit crowded, a bit strange, and a bit forced.

First, the police procedure part of the story. During Mass, a priest keels over, killed from a dose of cyanide in the communion wine. During the autopsy, it was revealed that the priest may not have been who everyone thinks he is based on facial reconstruction surgery and the removal of a well known gang tattoo. Eve and Peabody pull at the threads of the priest’s life to uncover not only the “who” (as in the murderer) but the all important “why”. While much of the progress in the case is made through Eve’s intuition, there is plenty of good police work that is performed by Eve and Peabody through witness interviews, researching the gangs, and consdering the motives. The case is somewhat complicated when another well known religious figure dies in the same way.

The best part of any police procedure case is when the investigator’s own belief system is challenged, either by the criminal or by the crime itself. In this case, Eve contemplates organized religion. Eve seems to be, at least, agnostic. Her opinions of religion aren’t very complimentary but then she meets Father Freeman Lopez whose faith is unshakeable. Freeman Lopez is someone who Eve comes to respect and admire by the end of the investigation. If each investigation takes something of Eve out, then perhaps it is true that it also brings something new and valuable to her life. Her friends and even her family (Roarke and Peabody and Summerset) have all come to her by way of a crime. Freeman Lopez is like that. While Eve may not convert to Catholocism, she does appreciate the strength of Freeman Lopez’s believes. In fact, if he were not a priest, I could see Roarke feeling threatened by Freeman Lopez.

Eve is also challenged by those who succumbed to gang activity. Those who were abused and neglected found family within the gang. If the gang required them to do unspeakable things, it was worth it to be free of being the constant victim.

All of the emotions that surrounded the investigation worked for me. What didn’t work was some strange tics that Eve seems to have developed in the last few books. First, I know that this book takes place only a couple of years after we first met Eve, but my real life clock says that it has been at least 10. or something. So I am getting a little frustrated with Eve’s abortive attempts at romance, her still constant snarling at Summerset, and her seeming failure to grow. Later in the story, Eve actually thinks of Roarke for a change and does something nice for him, but I get the sense that in Eve’s priority list, Roarke is not at the top of her list. He’s somewhere around eating and sleeping and frankly, any long time reader of the Eve Dallas series knows that the basic necessities of life are mere irritants in Eve’s relentless devotion to her job. Eve is still traumatized by her childhood to the extent that she sees evidence of its influence in every case. She is starting to have vivid dreams in which her victims and her past are melding together (the dream thing is some kind of supernatural addition that hasn’t always been core to the series as far as I can remember but I could be wrong here).

I know that this is the Eve Dallas series, but Roarke has played an important part since its inception but in this book, it seemed like Roarke was an afterthought. Would it be better if Roarke and Eve were not married but still in the courting stage? I don’t know. It just seems like the effort to make Roarke appear vital seemed forced as did the parts about Eve’s childhood. There were places in the story that her past seem to have alot of relevance, but it was brought up early on in the story and it felt tired and out of place. So my grade is two fold. It’s a B for the mystery and a C for the relationship aspect.

→ Jane
Previous article: Updike Is King of the Bad Sex
Next Post: In Regards to Series Poll