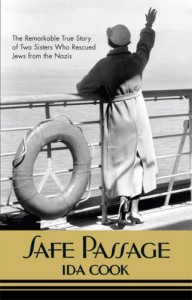 I’d been eyeing this book after it was promoted on the eharlequin website and this month, I decided “why not. Sounds interesting.” Interesting indeed. This book is “the truth is stranger than fiction.” Two young English women become enamored of opera, travel the world to see and meet their favorite opera singers and, through two of them, start to arrange safe passage for persecuted people out of an increasingly dangerous Europe in the years before the beginning of WWII. Now, who’d believe that?

It’s not fiction. It’s the life of Ida and Louise Cook, two daughters of an English civil servant who were, themselves, also initially civil servants. While both were working in low paying jobs in London ( £10 a month sound like enough to live on?), Louise first heard a phonograph and decided she must have one. Trips to nascent record stores followed where the sisters were first introduced to vocal music which lead them to fall immediately in love with opera.

Nothing would do but they must then go to live performances. Here they heard Lita Galli-Curci sing a recital and learned that she only sang in operas in New York City. So of course the sisters then had to travel to hear her. But how to do that while only earning  £10 a month in 1924? Well, set a schedule, save every penny – literally – they could, sew all their own clothes and travel as cheaply as possible. Two years later, they arrived – via boat – in NYC and fell in love with it, with Americans and with Lita and her husband to whom they’d written of their plans two years earlier.

Ah, the more innocent days before paparazzi and fanatical stalker fans when the genuine enthusiasm for opera displayed by two young Englishwomen was enough to earn them the friendship of some of the major opera stars of the twentieth century. Ida’s breezy write-ups of their adventures were written as an attempt to earn more money so they could travel more and see more opera performances across Europe. Her articles also propelled her into a career in journalism which lead to her long term career as a romance novelist for Mills and Boon under the name Mary Burchell.

And it was then, just as she began to earn, what was for her, a lot of money, that the most important phase of their lives began. Two of their opera friends, conductor Clemens Krauss and his opera singer wife Viorica Ursuleac, introduced them to a Jewish woman looking to leave Germany and settle in England. Ida and Louise had no idea this would lead to them eventually managing to get numerous people safely out of Germany and Austria before the outbreak of war five years later.

I know the authors who read this blog probably see their books as children, a way to make a living, as stories that have to be written, … oh, lots of things. But how about viewing them as a way to save a person’s life? A way to make money to finance trips to Europe to work out how to help people escape from near certain death? A way to offer the guarantees needed to secure British visas for people no longer viewed as people by the Nazi regime? I’m telling you, this part of the book is enough to make you cry and make you cheer on alternate pages.

And then comes the war years. When Ida worked in a bomb shelter by night while Louise had been evacuated to Wales with her government department. I know the word “pluck” is considered to be old-fashioned but it’s quite what came to mind while reading about the inhabitants of Bermondsey where the shelter was located in which Ida worked. Night after night of quiet British resolve to weather the Blitz, to count ones blessings that you’d only lost everything you owned but you were still alive, unlike the poor sods who hadn’t sought refuge in the shelter. The warden who quietly tells his wife that “yes, it’s bad up there” and she knows they’ve lost everything.

During the years spent trying to get people out of Europe and all through the war, the sisters dreamt of a time when beauty and grace would return to the world. And – as much as was possible – for them it eventually did. The last section tells about how they returned to traveling the world to listen to their beloved opera, how they met the new and upcoming stars, such as Callas, as well as got more chances to hear long time favorites. They often journeyed to America – by plane this time – to see Ponselle, Farrar, and Gali-Curci as well as reuniting with many of the people they’d assisted to safety. They are among the few Britons named “Righteous among the Nations” for the work they did before and after the war when they worked with displaced refugees.

Non opera fans should note that the first fourth of the book is devoted to the sister’s love of the art as well as discussions about stars then known around the world but now mainly sadly forgotten. Yet, I agree that it’s important to include this as it was opera and the people they met through it who had such an influence on their lives and who started them on their crusade to save as many as they could from prewar Europe. It also served, at times, as a cover for their journeys to Germany and Austria when too many questions began to be asked.

All through the book, we see what can be accomplished by two unassuming people determined to make a difference. As Ida said, “You never know what you can do until you refuse to take no for an answer.” I’m so glad Mills and Boon dusted this off and republished it in their 100th Anniversary year. B+