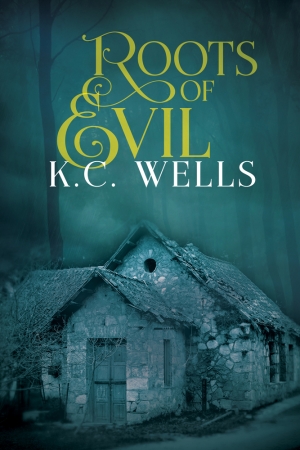 Many consider Naomi Teedle the village witch. Most people avoid her except when they have need of her herbs and potions. She lives alone on the outskirts of Merrychurch, and that’s fine by everyone—old Mrs. Teedle is not the most pleasant of people. But when she is found murdered, her mouth bulging with her own herbs and roots, suddenly no one has a bad word to say about her. Jonathon de Mountford is adjusting to life up at the manor house, but it’s not a solitary life: pub landlord Mike Tattersall sees to that. Jonathon is both horrified to learn of the recent murder and confused by the sudden reversal of public opinion. Surely someone in the village had reason to want her dead? He and Mike decide it’s time for them to step in and “help” the local police with their investigation. Only problem is, their sleuthing uncovers more than one suspect—and the list is getting longer…

I enjoyed the first book in this series and reviewed it at DA. I was very much looking forward to “meeting” Mike and Jonathon again and for the most part I was not disappointed. As the blurb tells you, the quiet village of Merrychurch now becomes a scene for another murder.

Of course one has to stretch your disbelief barrier a little bit to accept that murders started popping up once Jonathon decided to take a permanent residence in the village, but it was not a problem for me. The book even pokes gentle fun at the shows set in quiet English towns with many murders. I do watch “Midsomer Murders” after all :).

Jonathon is adjusting to the life in the village and to being contemporary “lord of the manor”. He and Mike keep working on their relationship and I really loved how it was moving forward. Only three months passed since the events of the first book and Jonathon may feel that not that much time passed, but he does seem to be quite comfortable with the strong feelings he has for Mike and vice versa.

“JONATHON ROLLED over in bed, smiling to himself to find Mike still there, on his side facing the window, obviously fast asleep. It wasn’t as if Mike shared Jonathon’s bed every night, not that Jonathon would mind that in the slightest, but Jonathon loved those nights when he heard the crunch of gravel outside as Mike drove his 4×4 onto the drive, and a thrill of anticipation rippled through him.

I love it when he stays the night. Jonathon hadn’t had many relationships in his life thus far, and he knew it was still early days. The signs were good, however, in spite of the reception Mike had received from Jonathon’s father—enough to cause frostbite in the middle of August. Thankfully, Thomas de Mountford’s career kept him busy enough that visits to Merrychurch would be few and far between.”

Jonathon and Mike decide to investigate the murder of Naomi Teedle and this time I thought the reason they got involved was a little bit more far-fetched than in the first book, but Naomi Teedle indeed was one of the Jonathon’s tenants so I could buy that part. I also thought they took the investigation on because they liked doing the investigating. Mike is also a former cop, so he is a competent investigator and he is just immensely curious as to what is going on around him and a smart man all around. It bears repeating, this is an amateur sleuth subgenre of the mystery genre and if this stretches your disbelief too much, this book may not be for you.

I once again thought that the book did a nice balancing act. Mike and Jonathon absolutely do inform local police about their findings and share information with local constable Graham. They are a little more wary of the policeman coming to “help” Graham to investigate, but even being wary did not make them act like idiots in my opinion. I was glad that the trend continued from the first book.

I thought the mystery was overall very well done. The writer took care to introduce a lot of suspects and several people may have had motives. I liked how Jonathon and Mike kept narrowing the list of suspects and how they tried to search for the new information, doing investigation the best way they could. I mean Mike is a former cop, so he does know methods and technique, but I really did think that Jonathon did not act like an idiot at all. He consulted with Mike and he was not being a fool, he restrained himself to finding new information almost till the very end of the story.

While I thought that their relationship proceeded to develop very nicely and I had nothing but sympathy and respect for both men. There was a moment in Jonathon’s relationship with his father that caused me serious scratching of my head.

I also feel that first twenty or so percent of the book were exceptionally slow. I know cozy mystery is not supposed to move fast, but this was VERY slow IMO.