REVIEW: Return of the Stardust Cowgirl by Marsha Moyer 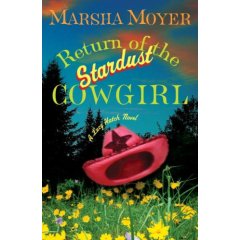 When I first read “The Second Coming of Lucy Hatch,” I was blown away by it. Loved the characters, loved the setting, loved the book. Since then, I’ve had my ups and downs with the Lucy Hatch series. But “Return of the Stardust Cowgirl” felt like coming home after a long time away. You know, when you finally get back to what you remember, and the people you grew up with and the place where you come from? Sure, things have changed since you left, people have aged, nothing stays the same but it just feels like you’re wrapped up in warmth and love and forgiveness, no matter what’s gone on in the interim.

Like all the other novels in the series, the action centers on the small east Texas town of Mooney. Stuck out in the piney backwoods, many things are just as I remember them – Lucy’s aunt Dove’s fabulous garden, Lucy’s prickly mother, her two solid brothers along with their wives and children. But life flows on and the town is shrinking as people move away to find work. Faye’s flower shop – which has been Lucy’s refuge since the early days of her widowhood before she hooked up with Ash Farrell and the town began putting bets on how long they’d last – looks like it will be the next to close down.

But even before Lucy hears this, she’s reeling from Denny’s return. Ash’s daughter from his first marriage is back home, fleeing from a bad marriage to a worse husband. And pregnant to boot. With her own music career finally taking off, Denny’s already got too much on her plate. And it’s not like nobody warned her about Will Culpepper who shows up hot on her tail then shows his ass. It’s a good thing for all that Ty Briggs follows since, as Dove puts it, he can shoulder a load.

Ash is still stuggling, day by day, with the fight against alcoholism that nearly tore their marriage apart after his own brief turn at stardom in Nashville. It’s a little easier than the worst of those dark days and Lucy is grateful they clawed themselves back from the brink to salvage the love that still burns bright between them. Ash tells her their love is the flame that keeps him steady and that most of the fabulous songs he once wrote were about her. With his home built studio now finished, perhaps the spark will strike again, allowing the music Lucy knows is still in Ash to pour out again.

“Return of the Stardust Cowgirl” is a soft, sweet coming home and winding up of the Lucy Hatch story. It’s some regrets, mingled with forgiveness, unconditional love, second chances and putting your heart out there even knowing it might be broken. It’s living with a few disappointments, shaking them off, squaring your shoulders and realizing in the end that life in a small east Texas town, surrounded by those you know and love is pretty darn good after all. B