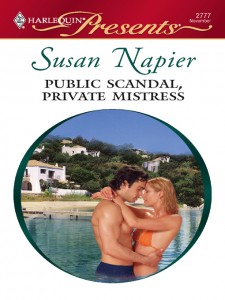 This was a bit of a surprise to me given how explicit it is. It read more like a Blaze at times than a Harlequin Presents. I also thought that it had a bit of a different HP feel. I wonder what those who don’t like HPs would feel when reading this one. The heroine, Veronica Bell, a New Zealander, was in Paris for Bastille Day before she heads to the South of France to fill in for her flighty sister. While staying at a rental flat in Paris, Veronica would, from time to time see this very gorgeous Frenchman. She decides, on her last day that she wants to finds someone to spend Bastille Night with. Gathering her courage, she goes to the cafe where she often sees him reading his newspaper and proceeds to pick him up. I can’t actually remember the last time I read about a woman propositioning a man and in such a straight forward way. He makes her work for it too. I have to admit I think that this scene set my expectations of the book in a very positive way.

Veronica and her stranger Frenchman have a one night fling and then she leaves him in the early morning hours and sets off for her fill in job for New Zealand food author, Melanie Reed, down near Avignon. Karen, Veronica’s flighty sister is Melanie’s personal assistant, but got a call to do a modeling shoot in the Bahamas. Veronica agrees to do the personal assistant duties until Karen gets back. It works well for Veronica because she’s setting up a business as a corporate gift buyer and it will give her an opportunity to scour the countryside for unique gifts that she can sell through her new business.

Lucien Ryder is Melanie’s stepson and Veronica is in for a big shock when she makes it down to the vineyard thinking she left her one night stand behind. Lucien is none too pleased that Veronica left without word and thinks that she’s some reprehensible tabloid journalist who lured him into her bed to get a big story of him. Veronica senses immediately that she could fall for him, bu that she wouldn’t walk away from a prolonged affair without being hurt:

He talked very persuasively of passion and exploration, but there was no mention of any desire for emotional intimacy in his suggested affair. While he might be able to retain the necessary detachment, Veronica was less sanguine about her chances of walking away with her heart intact. A few hours in his company had already caused her as much turmoil as pleasure, filling her with conflicting doubts and yearnings. She was afraid that with continued exposure she could very easily fall under the spell of his forceful, charismatic personality and end up with a guaranteed heartbreak when he vanished back to his rarefied world.

There is one scene with Lucien’s point of view but it was brief and since we didn’t revisit his thoughts again, I thought it quite out of place. The conflict in the latter part of the story relies heavily on standard mis-communication issues but given the brevity of the story, those issues were resolved without undue angst. There are a ton of coincidences in the book, but they all make sense. Napier has a plausible explanation for everything including why Veronica would see Lucien near her Paris rental and why she would also see him at the Reed home in the South of France. Eye rolling was kept at a minimum.

As I alluded to at the beginning of the review, there is a heightend sexuality to this story, an explicitness that I ordinarily don’t read in HPs. I felt that Veronica read like a modern heroine and that Lucien’s assholeness was a defense mechanism, employed first because he was hurt that Veronica had left him and then because he thought she as a tabloid journalist, and then because she kept refusing him. It was an enjoyable and quick read. I would think that people who haven’t read an HP before might like this one. (Of course I could be totally off on this because I tend to like the high drama HPs). B

→ Jane
Previous article: AAP Worried About Obama Presidency
Next Post: Oprah Seal of Approval for the Kindle and What It Means for eBooks