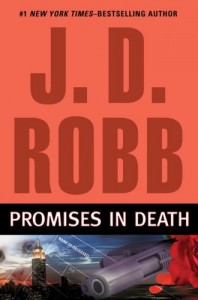 I have had an up and down relationship with the In Death books since the series went hardcover.   Happily for me, Promises in Death marks an upswing, an effective blending of the police procedural and personal aspects of Eve Dallas’s life and a particularly moving storyline featuring everyone’s favorite ME, Morris.

When Eve is called to a homicide scene in an apartment basement, she is shocked to find fellow cop and current Morris squeeze Amaryllis Coltraine the victim.   Stunned to death with her own weapon, stripped and divested of her ID and weaponry, and left on the cement basement floor of her own building, Coltraine offers very few clues about what happened and why.   Was it a rat?   Was it someone she helped put away?   Was it another cop?   No matter who ended Coltraine’s life, her death is particularly difficult for Eve.   Not only does she have to tell Morris what happened and pry into their relationship for clues, but she also has to look at other cops as possible suspects and deal with the resentment of Coltraine’s own squad, who are shut out of the investigation, except as subjects for questioning.   As Eve works to unravel the answer to this mystery, she is under the additional pressure of hosting Louise’s bridal shower at her home, which will involve a slumber-party invasion of virtually all the women in Eve’s circle, including the dreaded Trina.   And since Roarke will be accompanying the men to Vegas for a bachelor party, Eve will be on her own for the shower.   Which makes it a toss up as to what is scarier:   not figuring out who killed Coltraine or playing hostess for a girly-girl party.

One of my difficulties with some of the more recent books in this series has been the integration of the police procedural aspects and the personal aspects of Eve and Roarke’s life.   Or the lack thereof.   In Promises in Death, though, I felt that there was a nice balance between these two elements of the book, perhaps because the involvement of Morris created a natural bridge between the two.   Because of Amaryllis’s relationship with Morris, and because she was a cop, Eve feels particularly invested in this case, and she finds herself having to work as cop and supportive friend simultaneously.   It is a sign of Eve’s growth as a character that she does not run screaming from the more human aspects of her work here, even as she flails a bit in trying to offer comfort to Morris:

Eve’s struggle, though, strikes true to the short time she has been circulating more deliberately in the world of human emotion, and I appreciate that, because I am one of those readers who is wary of rapid progress in Eve’s character.   Since my reading timeline for the series is close to Eve and Roarke’s relationship timeline, I am not in a hurry for Eve to get it together and settle down into marital normalcy.   I like the fact that she’s still kind of clueless emotionally.   For example, when Coltraine’s death brings up the issue of safety, Eve is shocked to find out that Roarke is afraid for her nearly all the time:

He gave her a look filled with amusement and frustration.   “You’re smart,” he corrected, “you’re skilled.   But not always as careful as you might be.   I married a cop.”

While I realize that not all the books in the series will allow for this kind of interweaving, it really works here, because so many of the core issues between Eve and Roarke are implicated in the investigation, and Eve is beginning to understand how her independence affects Roarke in ways she cannot really change but that are important to recognize.   By the same token, the balance of power between them relative to the care-taking is more overtly confronted, with Eve trying, in her own way, to pay Roarke back for his attentiveness.

“I was going to do it – get dinner, I mean.   One of the fancy things you like, because – Hell.” . . .   “I can’t pay you back with sex or salt-crusted sea bass or whatever because you’re too busy taking care of me.   So now I’ve got this black mark in my column against the bright shiny star in yours, and – ”

He tipped her head up.   “Are we keeping score?”

This gentle sparring, the natural competition between Roarke and Eve, is characteristic to their relationship from the start, and it is effective here, as well, because it allows them to work around some of the deeper emotional issues between them without creating too much discomfort.   That discomfort is commonly associated with Eve, but in Promises in Death we are seeing some of Roarke’s issues more clearly, too – his need to remain in control, the compensation for his fear of losing Eve, the logic behind his sometimes not so gentle coercion of Eve, the man who hates to lose at and to anything, including his wife.   Although I wish more of Roarke’s psyche would be mined through these books, I think we are getting to see more pieces of his character, balancing out some the idea that Eve is screwed up while Roarke is perfect.   I have never found him to be perfect, and have always felt he was pretty controlling, so I am glad that we are starting to see this part of him more clearly addressed.

One other thing that Promises in Death does really well is that it allows for the secondary characters to move through the book without too much artificiality.   The hilarity of the bridal shower, complete with Peabody’s “party pajamas,” bellinis, a drunken comparative analysis of the sexual satisfaction McNab, Leonardo, Dennis Mira, and Roarke can deliver, Mavis’s baby, and even the scary Trina, seems totally unforced.   For a moment, Eve even thinks that she and Trina might have a shot at a civilized relationship as Trina gives Louise props for being able to fall in love and marry a former LC:

Just as Eve relaxed, as she considered there might be some skinny patch of common ground here, Trina turned, and her eyes went to slits.   “Now what the fuck have you done to my hair?   Hacked at it, didn’t you?   Just couldn’t let it alone or call me in to deal?”

“Not once I put the scissors to it, sister.   You’re lucky I’m a genius and a humanitarian.   I’ll fix it, and I won’t shave it bald down the center to make my point.”

Even Summerset has some good moments that transcend the standard bickering with Eve at the front door.   And despite the lighter moments in the book, the elements of the story involving Morris are touching and emotional without being maudlin.   Eve does not do sentimental well, and in this book, there is a good balance between fostering her emotional growth and not pushing too hard for her to be more open.   I must confess that I skipped the two (I think there were two) sex scenes between Eve and Roarke, because I always feel I’ve read them a hundred times, and the language just tends to get a little too purple for me.   I started to read the first one and realized that it was better if I just closed the door on the lovers and left them to their privacy.

As for the murder plot, I guessed the who and part of the why pretty early on, but I don’t really hold that against the book because I see the series as Romance with a side of suspense and don’t expect to be surprised by the killer’s identity.   However it was interesting in this book, because a name from Roarke and Eve’s past emerges in a way that adds another layer of personal importance to Amaryllis Coltraine’s death, and there were some solid tie-backs to several earlier books and plot lines, creating a nice sense of series consistency.   Eve is still dealing with the implications of a choice she made in an earlier book, and since I saw that choice as uncharacteristic, I am still not comfortable with the way this scenario is playing out.   In the same way that Eve is making slow progress in shedding more than 20 years of trauma, I find it hard to believe that she was able to shed a similarly embedded belief in the law as the final arbiter of justice.   It is this part of the series, the way in which Eve is still negotiating the grayness of Roarke’s moral code with the black and white nature of hers that I find to be the most problematic, the most un-nuanced aspect of her character evolution.   Also, it feels more and more like Eve is virtually unchecked in the authority she has, despite the involvement of Cher Reno in securing warrants and making the case stick.   To me, one of the uninvestigated conflicts in the books emerges from Eve’s commitment to the rules and the sometimes seemingly absent checks in the In Death world of law enforcement.

However, none of that was not enough to ruin my enjoyment of Promises in Death, which provided me with an extremely satisfying sojourn into the world of some of my favorite fictional characters.   With a big dose of sorrow and a large dollop of celebration, this book worked the whole emotional gamut and made some nice connections to past books.   A definite B+ for me.

This book can be purchased in hard cover from Amazon or ebook format from the Sony Store and other etailers.

→ Janet
Previous article: Publishers Weekly Finds that the eBook Genie Is Out of the Bottle
Next Post: Subscription Service Poll