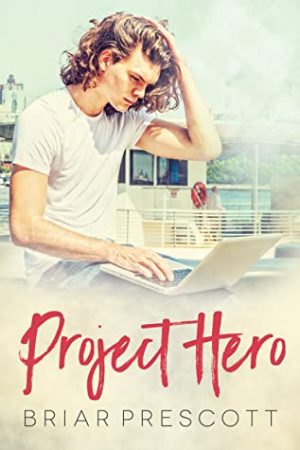 What if you accidentally fell in love with the right guy?

Andy:
If my life was a movie, I would be the sidekick. Not an especially promising start when my plan is to finally let my best friend know I have a crush on him. No worries, though. I have a plan. I just need a complete makeover. Change everything about myself so that when Falcon returns from his summer vacation, he can finally see I’m the love of his life. I totally know what I’m doing here.
Well, not really.
If I knew what I was doing, I wouldn’t look like every nerd cliché wrapped into one awkward package.
In short, I’m screwed.
But then Law Anderson enters the picture…

Law:
It’s all very simple. I need somebody to tutor my hockey team, and Andy needs somebody to help him with his crush. Sounds like a match made in heaven.
Only the more time I spend with Andy, the more I like this quirky guy who makes me laugh, and pretty soon I’m the one who’s tutoring Andy in way more than we initially agreed upon.
It’s fine.
I have it all under control.
But as weeks pass and the chemistry between us turns explosive, I’m starting to think that I might be in way over my head with Andy.
If only I could make Andy realize that he doesn’t need to change himself for love. If only I could make Andy see that he just needs to be with somebody who has considered him perfect all along…

I got this book as a gift during Heather’s this year books exchange at Goodreads. I heard a buzz about a new to me writer and wanted to check her book out. I mean it was cute and well written, but I have to be honest – it did not knock my socks off. I thought Andy was an adorkable character and I was glad that in Law the writer did not go for a stereotypical portrayal of a jock in romance books. I also very much appreciated that the book made me giggle many times – and Andy was mostly to blame for that in a good way.

BUT and it is a big but, I once again got a confirmation that the book which has just the romance as the main storyline and little else or nothing in the place of the plot has to work really hard to shine brightly for me and here it just did not happen. Again, I have read occasional contemporary romances that I loved so it is not as if I tried a book which I was sure would not work for me. No I was fully prepared to give it a try, but it just was not an awesome read for me; it was just an okay one.

I loved that Andy’s quest to make himself “worthy” of his crush did not play out in a stereotypical way. Of course it was clear from the beginning to the reader and everybody else that Andy does not need to make himself worthy of anyone but as long as Andy did not see it, his evolution as a character was important. I was worried that Andy will decide to make some really significant changes to his looks and even personality which will not be good for him and that it will drag out, but luckily it did not, not to me anyway. I also appreciated that Andy’s crush was not demonized at all at the end – I was afraid he will be revealed to be a bad person and in turn not worthy of Andy’s devotion.

I thought Law’s desire to help his team was truly admirable whether that meant that he had a hero complex or not, and truly, I thought he was a very sweet character as well who had a great chemistry with Andy.

I loved Andy’s family and once again appreciated that Law’s family was not demonized at the end either.

I was bored with the sex scenes though – sorry but I was. Those who have read my reviews before know that I always appreciate plot and characters and sexual chemistry first, and sex last, and I can easily do without sex scenes in my book. (fade to black, inexplicit or none at all). BUT I had been reading m/m romances for good thirteen – fourteen years now. I *have* read romances with scorchingly hot sex. To me – and this is of course IMO – this was not it, not even close.

I will leave you with one of Andy’s speeches to see if the humor does it for you or not.

“I find myself strangely attracted to you,” Andy says with a shrug. Then he winces. “Shit! That was the wrong one. Umm. Soul mates attract each other like magnets?” he says like he’s not sure of himself. Then he scrunches his nose. “Man, that sounds even cheesier than it did when we practiced it. Damnit, I’m fucking it all up.” He swipes his palm over his forehead. “Did you swallow magnets because you’re so attractive?” he rushes out and then slams his eyes shut and groans. I think I’m in a state of shock. One that even extremely bad puns can’t seem to bring me out of. Andy peeks at me through his curls.

“Did any of that make you want to bang me with undying passion?” he asks and scrunches his nose. Well, that does it. “What?” I ask. “Ah, fuck it,” Andy says and throws his magnet on the floor. “Okay. Here’s the thing. I’m going to tell you something, but you’ve got to promise you won’t freak out.” He pauses dramatically, and it kind of looks like he’s about to pass out before he blurts out, “I’m in love with you. And I know I promised there wouldn’t be any feelings and shit, but I failed. So… oops? Although, I’d like for you to take into consideration that it wouldn’t have happened if you weren’t so goddamn irresistible”