REVIEW: Preachin’ to the Choir by Cynthianna Appel

NOTE: Moonlit Romance is closing their epublishing doors December 31st so if you’re interested in any of their books, better buy now. 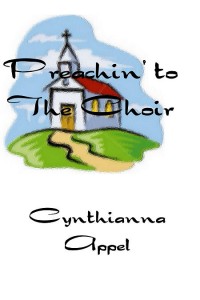 When I saw this at Fictionwise, the book blurb sounded fun instead of, well, preachy. And it was. I’ve been reading a lot of contemporary suspense novels lately so a plain, old regular contemporary about two people falling in love with no spies, killers or other suspenseful elements was just what I needed.

Jonathan could do nothing to aid his wife’s losing battle with cancer. With twenty years into the ministry, he can’t believe the Lord would leave him suddenly with both an empty nest and empty spot on the other side of the bed. Kat, music teacher and mother of grown twins, feels “settled” in small town Texas. Life may be dull, but at least it’s predictable–unlike her life with her late ex. Kat has come to the conclusion that a happy, committed relationship with a male is impossible thing, so she makes peace with herself and with God. If nuns can live celibate for years, then why can’t she make it the next fifty?

Only since this is a romance, I knew Kat wasn’t going to be a nun. What I wasn’t sure of was whether or not there would be a whole lot of preachin’ to the reader. The blurb at Fictionwise says that this isn’t an inspirational book and after finishing it, I would heartily agree. It more a book with a hero who just happens to be a minister.

The book starts out with a flashback of Jonathan dealing with the early days following his wife’s death. This is a woman he’s loved for over twenty years and whose death was devastating to him. Yet, as the story progressed, I was glad to see that Jonathan didn’t wallow in grief nor was his first wife revealed to be some kind of secret harpy in order to make Kat look better or to “justify” Jonathan finding a second chance at love.

It’s nice to see the hero concerned with his appearance and whether or not the heroine would find him attractive and sexy. Jonathan’s still a good looking man but he’s let himself go a little as he reached middle age (and haven’t we all?). We see Jonathan finally ditch his old, ratty sweaters, buy some snappy new clothes, an exercise machine, get a dog to go walking with and get a haircut. What a change from the usual scenes of a heroine worrying over every little bump and bulge.

As I said, even though the book is about a minister, we the readers aren’t preached at. No one has a crisis of faith and no one needs to be “saved.” We see Jonathan going about his daily life, tending to his parishioners, seeing to the church calendar, going to meetings and being a man of God but that’s not his whole life. He also has feelings of desire for Kat and has to react to those within the confines of his faith. Some of his parishioners might try his patience at times but through his work, you show us what a kind and compassionate man he is.

“A booth for two?" the young waitress asked, one eyebrow cocked in a knowing manner. She was rail thin with a bleached blond crew cut, several piercings in one ear and a small green jewel placed on one side of her nose.

One thing that did surprise me is that (gasp) Kat has a past. Well, she’s a good looking 42 year old who has needs and desires like anyone and the pickin’s are somewhat slim in this small Texas town. And while it saddens Jonathan that she thinks badly about herself because of it, it doesn’t bother him nor does he feel it’s a deal breaker to any relationship between them. I was dreading any lectures from him much less condemnation but it never happened. He takes every opportunity to defend her to one and all. Bravo Jonathan. And Brava Kat for being willing to try for another marriage after her first disastrous one and her initial naysaying to Jonathan about her luck with men.

One of my peeves is when authors give their characters cool or unusual jobs then never do anything with that. So I enjoyed watching the nuts and bolts of Kat as a music teacher and choir director. She’s very supporting, very positive and encouraging even when she must be ready to spit nails and pull her hair out. Add to this that she’s also a teacher and I was impressed.

Since both lead characters are middle age and formerly married, it’s not surprising that they have adult children. Keely and Kevin are neither saints nor sinners. Keely shows Kat that she needs to let her children go to live their own lives, no matter how hard it is as a mother who wants only the best for them. They’re adults and have to make their own mistakes as well as triumphs. And if parents believe enough in the way they’ve raised their offspring, the children will often surprise the parents with how well they manage. Even though I wanted to slap Jonathan’s daughter, Elizabeth, with her Holier Than Thou attitude towards Kat and her family, it was refreshing that she wasn’t some goodie-two-shoes minister’s daughter. The reactions from the other parishioners was a nice change from the finger wagging so commonly attributed to Christians.

I was surprised that the Jonathan’s congregation would consider selling alcohol at a church function even if it is to raise money for a new educational wing for the building. It’s never mentioned what denomination the church is but for any Protestant church, this would be a no-no. At least it would be where I’m from. Maybe in Texas, they do things differently. I did like the Southern “feel” to the dialogue. I talk about “fixin’ to do things all the time, myself.

As much as I liked “Preachin’ to the Choir,” it’s too bad that story is marred by bad copy editing. Chose for choose, Texas hill county for country, his Marines dress uniform for Marine dress uniform. This is one area I would have hoped would be improved on in the future. Still, if you’re looking for a straight contemporary that’s G rated (though with intimations of intimacy), check it out. But quickly (see note above) B

available in trade paperback or ebook at Moonlit Romance or at Fictionwise.