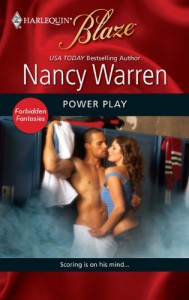 Emily Saunders was in Elk Crossing for “a wedding she didn’t want to attend with far too many of her family and friends asking nosy questions about her own continuing single status” when her hotel becomes infested with bed bugs. Another traveler at the hotel is Jonah Betts playing in his Old Timers Hockey League playoffs which is usually one of the highlights of his year.

The two get the choice of staying in the last hotel room complete with a leaky ceiling. Emily tries to throw out any number of ideas that can resolve the double booking problem including a sleeping bag on the floor.

Jonah was a pretty easy going guy, but this was going too far. He had his team to think. “I have an important day tomorrow,” he told her. “I need my sleep. You bed down on the lobby floor.”

She stalked right up to him, nose to his collarbone. Their lack of equality in the height department seemed to aggravate her even more. “I have an important day tomorrow, too.”

“I’m competing in a hockey tournament.”

“I’m a bridesmaid in a wedding.”

It’s not like Jonah doesn’t find her attractive. He does, but he’s more interested in trying to get a bed for the weekend than stirring up any chemistry between the two. He even goes so far as to promise that he won’t make a pass at Emily in hopes that she’ll agree to the simple solution of sharing the hotel room. Finally, realizing that it’s either sharing this one room with this stranger who proclaims he is a cop or going to stay with her relatives, Emily caves.

She turned back to him, he hair swinging in a silky curtain. “I carry mace. I’ll be sleeping with it under my pillow.”

“Hey, it’s got to be better to share a room with me than bedbugs.”

Despite Jonah’s hockey games and Emily’s wedding duties, they end up spending quite a bit of time with each other. Jonah, with the clarity of an outsider, sees how Emily allows her family to take advantage of her. She’s single, after all, and in need of fixing with a surplus of time to do a dozen tasks from picking up the china to handwriting the place cards. Emily, despite her success as part owner of a wellness clinic, always feels diminished when she is home.

I liked that the attraction between Jonah and Emily built upon their enforced interaction. After watching Emily ineptly explain (lie) about why there is a man answering her hotel room phone, Jonah begins to notice little details about Emily. Emily begins to see Jonah as more than just a tall, attractive stranger but a man with a solidness about him; a good listener.

It’s a charming story. Emily and Jonah aren’t single because they have serious commitment issues but because they’ve never felt strong enough for someone to envision spending the rest of their lives with that other person. Because the two are relatively agnst free, the story contains a secondary romance and a suspense plot to fill out the length. The suspense plot was a little hokey but the jeopardy works to make both Emily and Jonah admit that the brevity of their acquaintance was no barrier to their love.

The secondary love story featuring Sadhu Ranjit whose nickname is the Indian Stallion for all the women who tend to drop their skirts when he’s in their presence and Emily’s friend Kirsten who is known for being rather weak willed when it comes to handsome men. Sadhu spends a little time with Kirsten and decides that he would like to get to know her better and refuses to sleep with Kirsten. It was amusing but very brief. I did notice that this was the second book in which a man of color played the leading role of a secondary romance in your Blaze books. I hope that we’ll get to see one of these guys play the main male protagonist.

I really enjoyed Emily and Jonah but it is a story that doesn’t have deep point of views but instead shines with good, sexy repartee, strong chemistry, and likeable characters. B-