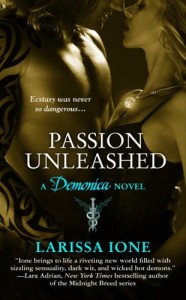 My first introduction to your work was in the ACRO series penned with writing partner, Stephanie Tyler under the psuedonym of Sydney Croft.   While I didn’t know much about your stand alone writing in the Demonica series, it debuted during a time in which I was a paranormal slump. I didn’t feel enthused enough about urban fantasy/paranormal stories to spend time on a semi-new to me author.

Jia’s review of Demon Unchained piqued my interest.   Jia is a very picky reader, particularly in regards to fantasy/sci fi /paranormal books because she is so well read in those sub genres.   A Jia recommendation of a paranormal romance, for me, is solid.

Passion Unleashed tells the story of Wraith, the third and youngest brother of the Seminus demons, who operate the Underground General Hospital.   Wraith has recently gone through his s’genesis change without the help of a mate.   Wraith welcomed the transformation because he was supposed to turn into a rutting beast who wouldn’t remember or even be conscious of his decisions to spread his seed far and wide.

Forgetfulness is what Wraith sought but not what he had achieved. Somehow the s’genesis made him into a rutting beast with the ability shapeshift into human form (and other demon forms), but he remembers everything.   He remembers the torture at the hands of his mother, a vampire.   He remembers the terrible acts his hunger for food and sex made him do.   He tries hard at playing the “I don’t care card” but truly he cares too much.

Serena Kelley is a human virgin.   She’s been gifted with a charm that keeps her free of injury but only if she maintains her virginity. (She’s like a human unicorn).   She burns to have a man; flirts recklessly; courts danger.   She is sent by her employer/guardian/handler to obtain two relics in the Middle East.   On the way, she is supposed to meet up with Josh, a Guardian, who will provide her with a key to obtain these relics.

Wraith has been poisoned and in order for him to obtain a cure, he needs Serena’s charm.   Only problem is that if he takes her charm, she’ll die.   Initially, he and his brothers are of the opinion that one human’s death isn’t worth his. Wraith sets off to seduce her, steal her virginity, charm and life.   Nice guy, right?   He intercepts Josh, rifles through Josh’s memories and presents himself to Serena as helpful “Josh.” Serena is delighted to have Josh’s help and delighted that Josh is so hot. She thinks that she’ll enjoy Josh as much as she can without, of course, giving up her virginity.

Of course, Wraith begins to fall for Serena. For all her sexual innocence, she’s irrepressible.   Her charmed life has probably shaped her, but her ’embrace life’ attitude is so different than what Wraith has known before and so intoxicating, he finds he can’t quite bring himself to be able to snuff her candle out even when she’s wrapped so close around his body, the oxygen to his brain is cut off.

There are very funny moments in the story such as when Wraith has to make up stories to his brothers why he hasn’t screwed Serena yet and killed her.   There’s Serena’s obliviousness to Wraith as a demon.   There are very tender moments in the story such as when Serena tells Wraith it doesn’t matter what happened to him in the past and that she finds him heroic.   There are bittersweet moments when Wraith must weigh Serena’s life against others who have sacrified for him in the past.   Wraith, who has always been selfish, always thought of himself first, must make a terrible decision.

This book isn’t perfect.   I hadn’t read the first two books in the story nor did I read the glossary and was lost for a good portion of the introductory chapters.   This is an end of the world story and I thought the conclusion and denouement was too convenient.   The secondary romance involving Gem and Kynan lacked interest to me.   Perhaps this was because it was a continuation from previous books, but I was more interested in Serena and Wraith and was impatient to return to them. I hesitate between a B and B+ but settled on the B because I’ll re-read the story but only certain parts.

This book can be purchased in mass market from Amazon or ebook format from the Sony Store and other etailers. The first book in this series, Pleasure Unbound, is $1.00 at most etailers.