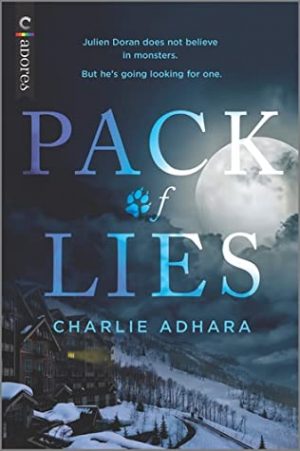 Julien Doran arrived in sleepy Maudit Falls, North Carolina, with a heart full of hurt and a head full of questions. The key to his brother’s mysterious last days might be found in this tiny town, and now Julien’s amateur investigation is starting to unearth things the locals would rather keep buried.

Perhaps most especially the strange, magnetic manager of a deserted retreat that’s nearly as odd as its staff.

Eli Smith is a lot of things: thief, werewolf, glamour-puss, liar. And now the manager of a haven for rebel pack runaways. He’s spent years cultivating a persona to disguise his origins, but for the first time ever he’s been entrusted with a real responsibility—and he plans to take that seriously.

Even if the handsome tourist who claims to be in town for some R & R is clearly on a hunt for all things paranormal. And hasn’t taken his brooding gaze off Eli since he’s arrived.

When an old skeleton and a fresh corpse turn a grief errand into a murder investigation, the unlikely Eli is the only person Julien can turn to. Trust is hard to come by in a town known for its monsters, but so is time…

Review.
This is an ARC review.
Dear Charlie Adhara,
I loved your Big Bad Wolf series, and when I have read about the possibility that the next book would feature the enigmatic Eli as the main character I was very excited. I was very surprised to find out that the first book of the spin-off series indeed featuring Eli would be out so soon and of course I could not resist asking for an ARC.
I always wonder whether I should recommend the first series for the readers who may be wondering whether they should read it before starting the spinoff.  I think here while I wholeheartedly recommend the story of Oliver and Cooper, even though Eli makes appearances there (and pretty significant one in the last book), I think people should be okay in terms of not being confused if they don’t want to read the previous five books. You will miss a lot of Eli’s back story and his character development, but here you are told about most things that he has to endure in his past, and it is not a long recap, but the main beats were mentioned I thought.
I also thought that the writer did a good job taking Oliver and Cooper (the main couple in the previous series) out of the action. I thought that not wanting to disturb them on their honeymoon made a good enough reason for Eli not calling them. Of course opinions may differ on this one, but I was okay with it and happy that both of them made an appearance in the end. I think it will be harder to take them out of the action in the next books though considering their obvious affection and connection with Eli, so I am curious to see how the author will handle it.
The blurb gives you a nice set up. Eli just started his work as the manager of the retreat for runaways werewolves and he is really eager to do a good job and a new guy Julien comes to the town because he is apparently searching about the mystery connected with his brother’s death and his brother was REALLY into looking for monsters, real and imaginary ones.  In the meantime the very real mystery seemingly completely UNCONNECTED to his brother’s death plays out in town and very much threatens Julien and Eli’s life and limb.
Obviously since Julien is a completely new character, I was wondering if the author would be able to make me like him and if so, how fast. That was not a problem, I did like him pretty fast, but I also thought that he had a lot of grief to go through even if he claimed that he already had.  I was very attached to Eli already so that was easy enough, but I was also curious whether the connection between them will work for me and well, I have to say that part did not happen right away.  I am not sure why,  I think the author established the attraction between them fast enough, that was not a problem.
But both Eli and Julien admit to carrying too many lies and they know they should not trust each other and they dance around each other (while danger is looming because of the mystery/suspense plot) and I guess them being from completely different worlds, it just did not really work for me right away. Interestingly enough, sex between them actually helped me to strengthen their connection in my mind (for those who don’t like it there are mild dominant/ submission undertones. Only mild, but it is definitely there) so I started to root for them even before the lies and omissions between them are being cleared out.
Here is a tiny glimpse at them together:

“Eli’s gaze softened to something pleased and very nearly shy. He nodded and Julien was surprised by the pulse of arousal that simple movement sent through him. Usually he liked nothing better than wringing a loud and desperate yes from his partners. Finding this spot and that tone and every single touch that made a particular person’s body begin to babble. Apparently Eli’s silent consent was just as thrilling. Either that or Julien was overcome with how efficiently they’d actually come to an agreement, for once.”

I am looking forward to the next book in the series.