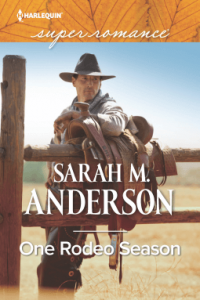 When his past collides with her present, only true love can survive the wild ride…
Bullfighter Ian Tall Chief is determined to get off the reservation and onto the pro circuit. After a wild youth, and some big mistakes, he’s found his focus. The only person who can break his concentration? Lacy Evans, owner of the Straight Arrow Ranch.

But the beautiful cowgirl is dealing with problems of her own. She’s running the ranch alone, after her parents’ deaths. The macho rodeo world is not ready for a female stock contractor. And she’s discovered her parents were keeping secrets from her—ones that rock the very foundation of her identity. Can she trust Ian to be the good man he claims to be?

Why did I request this book? First of all, it’s your name on a rodeo book and one that is linked to “Rodeo Dreams” which I loved. Second, the cover shows a guy who looks like he’s a bit older, a bit wiser and a man who has some mileage on his odometer. Don’t shoot me but every once in awhile I need a break from the endless shirtless hero with six pack abs – not that I don’t like those but still variety is the spice of reading life.

Ian’s a bullfighter! Riding takes guts but bullfighter takes gutsy to a whole nother level. In the book about his cousin, bullrider June, you gave us a lovely LGBTQIA secondary romance I wasn’t expecting. Dare I hope that some of the riders and bullfighters of color might get the same here or in another book? I loved the banter between Ian and his partner Jack. It’s obvious that they’re not only partners but friends as well.

Seeing a bit of the characters from the previous book was nice too. Since Ian’s impetus to become a bullfighter was his competition with his cousin – who really can ride better than he does – it makes sense for her to appear again. Mitch and Paulo are also part of not only June and Travis’s rodeo family but also that of Ian and Jack plus I was glad to see them there as a LGBTQIA couple without any big deal being made of the fact beyond that they’re ones who have made their own family. It’s something Lacy is finally getting to tap into and a major point in her moving past her sense of being alone in the world after the death of her parents.

Ian feels the spark with Lacy even before he discovers who she is. Bravo that he’s the kind of stand-up guy who respects her for how she does and handles her job but is also not going to put up with anyone acting towards a woman as her enemy publicly does. He talks to her face instead of her boobs! And that’s after Lacy first tells him off for how he handled her top bull. But Ian’s not always been the perfect gentleman or totally responsible in how he handled his relationships which of course will show up later in the story.

Lacy comes across as pricklier than a porcupine with an intense mean-on but there’s a perfectly good reason for it. She’s like June Spotted Elk – she’s a woman working in this macho man’s world. She can’t afford even one slip up or moment of public weakness. She’s got to do the proverbial “twice as good.” I did start to get a little tired of her “I don’t need any help” refrain when she clearly did but I could understand it given the fact that she wasn’t used to either asking for or getting outside assistance and she did eventually see that it’s not a sign of weakness.

Hints are dropped about *something* in Lacy’s family life, something that has thrown her and spun her end around trying to understand it. Ian’s dark secret is revealed early but he still keeps it close to his chest for fear Lacy will think less of him for not being the man he wants to be for her and wasn’t for another.

Ian and Lacy circle around each other at first. She’s bristly while he keeps trying to crack her shell. The middle part of the book focuses on this and pushes the mystery and danger of who might be trying to sabotage Lacy’s stock and chances to save the ranch. The scenes of Lacy and Ian inching towards a relationship are individually very moving as she slowly lets down her guard but, they continue for a bit too long to the exclusion of anything else. More of a mix of the sexy and the stock sabotage would have worked better for me.

The homestretch of the story incorporates both Lacy’s and Ian’s personal secrets which I had already kind of figured would happen. It ushers in the final conflict they must overcome in an organic way which ties in with everything that’s happened before rather than hurdling in from out of the blue. I especially liked that it showed how Lacy has grown in confidence about what she thinks she deserves in a relationship and that she’s got the strength to hold out for Ian’s total commitment. Meanwhile, Ian’s struggles with his past help Lacy move past something that was threatening to emotionally drag her under. They are there for each other when and how it counts.

I hope you continue writing in this rodeo world. There are characters with stories to be told plus I want to know if Jack and Ian make it to the bigs! Will Rattler prove himself on this next level and will Mitch get over his injuries and ride again? Is there a romance for Jack, Randy, or Garth? Questions, questions. B