REVIEW: On the Surface by Kate Willoughby 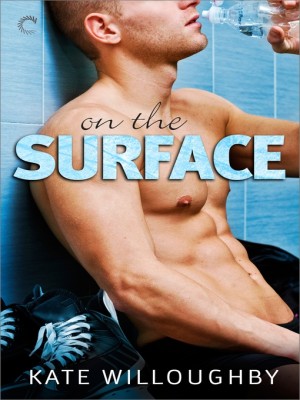 NHL player Tim Hollander is traded from his Stanley Cup winning hockey team to San Diego Barracudas because he’s a PR disaster after throwing a water bottle at a harassing fan. His goal is to get in the best shape of his life and stay out of the media limelight. This lasts all of a day or so.

Erin Collier is a nurse with a big crush on a doctor who she finds out is a big hockey fan. While getting lunch at a burger place, she discovers that a few of the Barracudas are signing and decides she’ll try to suck up to her doctor crush by getting an autograph.  She picks Tim’s line because it’s the shortest, not because she is a fan.  While in line, she gets into an argument with an autograph scammer who becomes physical with her. Tim reacts by punching the fan out.

The Barracudas PR person seeks out Erin after the incident to help paint Tim in a good light which Erin is happy to do because she’s embarrassed she caused the fight in the first place and she doesn’t like it when the press tries to tarnish Tim. After a press conference, Tim and Erin find themselves in each other’s company but while Erin thinks Tim is attractive and fit, she’s in love with her doctor.  In fact when teased during the press conference about Tim being single, Erin replies that he really isn’t her type.

Tim becomes intrigued by Erin. He’s ready to settle down and begins to think of Erin as very datable. There’s something very charming about Tim who I viewed as a kind of harmless action oriented guy.  His emotions are close to the surface and he often acts first without thinking it through but he means well.  Tim is a perfect blend of aggression and shyness. He’s a bit embarrassed when Erin catches him having a sexy dream but he rallies quickly. In another point in the story, he’s jealous and says:

“I’m completely calm,” He tapped the carpet with his stick. “Here’s calm.” The stick whooshed to the right eight feet. “Here’s off the deep end. I’m somewhere in the middle.”

At one point, he says he’s “Couple Man” unafraid to hold hands in public and attend chick flicks. Heh. The interactions Tim has with his two other hockey mates are fun, believable, and good natured. It’s not always the stereotypical locker room discussions about tapping that and objectifying women (although there is some because his one friend is still in the player stage).

Erin’s crush on the Dr. comes full circle because once Tim is in pursuit, the rich doctor finally realizes that Erin may be worthy of his attentions. Erin had a great blend of new fan excited about dating a hockey player while still being unsure about the attention.  She has assumptions about athletes and makes more than one comment about Tim being a player. He calls her on it, telling her she needs to apologize because he’s not that type of guy.  Surprised, she thinks about it and does apologize.

There’s plenty for sports fans to love in the book from the superstitions to the actual games to the suspense of how the season will end up for the players. But there are somber emotional notes as well. As the two fall in love with each other new challenges (old crushes, the danger of the sport, lifestyle issues) put pressure on the relationship. I saw one reviewer comment on how–despite the relationship drama–Tim and Erin acted like adults. They might disagree but ultimately they talk about what bothers them. It helps, I think, that Tim was so open about his feelings.

There were also parts of the book that surprised me, particularly at the end. The insight into Tim’s head, as a player, was different and believable.  There’s a very good natured feel about the story. If you like a sweet, fun loving guy who falls fast for his girl, then On the Surface is a perfect fit. B