Review: Of Charms, Ghosts and Grievances (Dragons and Blades #2) by Aliette de Bodard 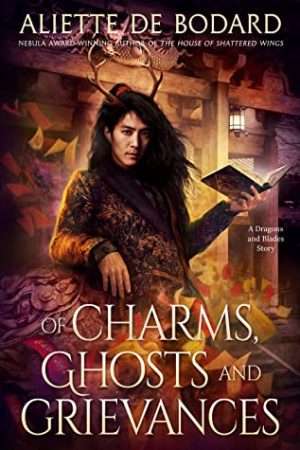 From the author of the critically acclaimed Dominion of the Fallen trilogy comes a sparkling new romantic adventure full of kissing, sarcasm and stabbing.

It was supposed to be a holiday, with nothing more challenging than babysitting, navigating familial politics and arguing about the proper way to brew tea.

But when dragon prince Thuan and his ruthless husband Asmodeus find a corpse in a ruined shrine and a hungry ghost who is the only witness to the crime, their holiday goes from restful to high-pressure. Someone is trying to silence the ghost and everyone involved. Asmodeus wants revenge for the murder; Thuan would like everyone, including Asmodeus, to stay alive.

Chased by bloodthirsty paper charms and struggling to protect their family, Thuan and Asmodeus are going to need all the allies they can—and, as the cracks in their relationship widen, they’ll have to face the scariest challenge of all: how to bring together their two vastly different ideas of their future…

A heartwarming standalone book set in a world of dark intrigue.

A Note on Chronology –
Spinning off from the Dominion of the Fallen series, which features political intrigue in Gothic devastated Paris, this book stands alone, but chronologically follows Of Dragons, Feasts and Murders. It’s High Gothic meets C-drama in a Vietnamese inspired world—perfect for fans of Mo Xiang Tong Xiu’s Heaven Official’s Blessing, KJ Charles, and Roshani Chokshi’s The Gilded Wolves.

Dear Aliette de Bodard,
Your writing style always works for me. I think you are a great writer. I have read a lot of your books and more or less liked them all, but the Dominion of Fallen trilogy and this continuing spinoff adventures of one of my favorite couples from that trilogy are my favorites of your works. The blurb actually gives you a very detailed set up (frankly considering that this is a novella I wish the blurb would be less spoilery, but I am going to guess the writer was happy with it so this is all that matters).

Dragon prince Thuan and his husband Asmodeus are once again on holiday in Thuan’s native kingdom and very soon their holiday turns out deadly. I glanced at some reviews after I finished the story, something I rarely do, but it was honestly just a glance at a couple of them, so I don’t think it interfered with my thoughts too much, but I do want to note I completely disagree that this is a stand alone story.

Oh, you can start reading with the first book of the spinoff which I reviewed as well, you won’t get confused where the plot is concerned, you don’t need to read the trilogy first for that. However, there is SO MUCH history and so much character development and relationship development for Thuan and Asmodeus in that trilogy that you’re going to miss out on a lot. Let’s just say that they started from a much worse place than where they are now and they came a long way indeed.

I also actually disagree that this story is a mystery. Oh, our heroes do have to investigate a murder and help a girl ghost to erm …. end up in a much better place than where she started in the story, but literally the identity of the murderer is revealed in the middle of the story because somebody recognized this person’s way of doing certain magic. I am saying this not to diminish the quality of the narrative in any way, shape or form! I am just trying to place this story in what in my opinion is a proper genre and in my opinion mystery is not it. Maybe it is a mystery which did not take much to solve at all? I mean bringing a murderer to justice definitely took a toll on all the characters, but finding out who the murderer was – not really. Come to think of it, since the story is a novella, it probably would not have enough page space for a detailed investigation.

I think the further development of Thuan and Asmodeus’ relationship is a main story here and I thought it was brilliantly done how seemingly external problem (finding a ghost, trying to figure out what to do with her and trying to solve the murder) very quickly escalated in something that both men had a personal stake in and how quickly it started to have an affect on their relationship. I thought it was exceptionally well done, really.

As always settings were great and very detailed, most likely inspired by ancient Vietnam. I also found the magic to be creepy and fun, but most importantly I ended up loving the main characters even more than I did before.

→ Sirius
Previous article: REVIEW: Airline Pilot: A Day in the Life by Grant Corriveau
Next Post: REVIEW: Eclipse the Moon by Jessie Mihalik