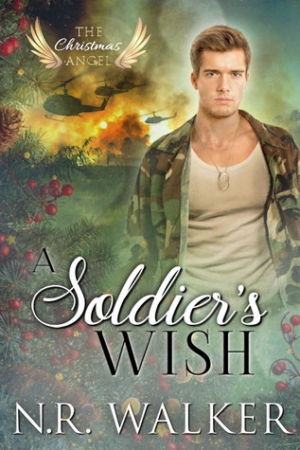 A Soldier’s Wish by N.R.Walker.

Gary Fairchild is proud to be a hippie college student, and he protests the Vietnam War because he believes in love and peace. To him, it isn’t just a counterculture movement—it’s a way of life. When tickets to the Aquarium Exposition—3 Days of Peace & Music, or Woodstock, as it was better known, go on sale, there’s no way he isn’t going.

Richard Ronsman is a sheltered farm boy who lives in the shadow of his overbearing father. He’s hidden his darkest secret to earn his father’s love, but nothing is ever good enough—not even volunteering for the Vietnam War. And with just a few days left before he’s deployed, a striking hippie invites him to join them at a music festival

Three days of music, drugs, rain, mud, and love forged a bond between these two very different men that would shape the rest of their lives. They share dreams and fears, and when Richard is shipped off to war, they share letters and love. For Richard’s first Christmas home, he is gifted a special angel ornament that just might make a soldier’s wish come true.

I am picky about Christmas stories. I like holiday magic in my books very much, but way more often than not they contain too much sugar for me and I end up consuming very little.

The blurb gives you a good set up. Gary and Richard meet in 1969 when Gary and his friends are planning to go to Woodstock and in the diner Gary sees Richard who is about to fly to New York to be shipped to Vietnam. Gary feels sorry for Richard and invites him to go to Woodstock with him and his friends. Richard is going to Vietnam mostly in the hope of winning his father’s approval and in the hope that his father would consider him “a real man”, even though Richard knows that this is not likely to happen.

Richard is also gay, but he never even kissed another guy, only dreamt of it, mostly because he is so scared of his folks and what will happen to him if somebody finds out, but he is attracted to Gary and eventually decides to go with them.

This was a weird novella in a sense that this was one of the truly rare occasions where I bought the love between the men at first sight, or almost at first sight. I have read stories where the lust at first sight believably transformed for me in the attraction and love, but love at first sight is not something that works for me very often. Here it worked. Although the flip side of it that Richard wanting to *experience everything* before he goes to war worked for me only to a degree. Yes I get that Woodstock and Gary symbolically frees him, but the kid who repressed his desires to such a degree that he would only dream of kisses now wanted an anal sex within a day? Okay I guess – I found it hard to swallow, opinions may differ.

But their connection was so very sweet and believable to me and I really liked it and I loved their letters to each other while Richard was in Vietnam and what happened after he came back, I bought it at all, even though it was mostly about them and their struggles to reconnect and heal the mental and physical pains that war caused and kept causing.

I am not sure if the Angel was needed here I have to admit, it felt as if it was inserted as an afterthought. I get that it needed to be to become part of the series, but I am not sure what would have changed in the story without her. 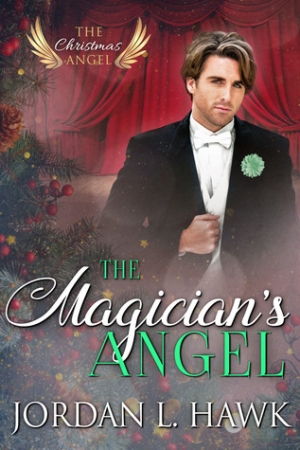 Vaudeville stage magician Christopher Fiend lives for the spotlight. His chance at big time stardom awaits him in Chicago, the next stop on the circuit after the little town of Twelfth Junction.

Edward Smith wants nothing to do with his family’s theater. Until Christopher catches his eye on opening night, then treats him to a very special performance during intermission.

When a dead body turns up in the middle of Christopher’s act, suspicion immediately falls on him. If Christopher and Edward can’t work together to clear his name, Christopher won’t make it to Chicago in time. Edward knows he shouldn’t get attached to a man who will be gone in two days, but his heart—and a very special angel—have other ideas. The Christmas Angel series of holiday romances follow the travels of an angel ornament through the decades as she inspires (and sometimes nudges) lonely men to find their Happily Ever After. The Magician’s Angel is the third in series, which can be read in any order.

This is another story from the Christmas Angel series of novellas, which are connected by the certain angel helping lonely men find love at different points in history. This time the year is 1910, and we meet the magician Christopher who, with the other members of the circus he often travels with, stops by to perform in a provincial theatre and one of the owners of that theatre is Edward. The theatre is struggling and Edward knows they have to close the door soon, but for the sake of his brother Theo , he cannot bring himself to do so.

I love theatre and the magic which I often feel when I come to see a musical or a play shined through for me. The romance starts with the quick hook up, which once again worked very well for me but as a *hook up* which could lead to more. I also appreciated that the author made the characters work together and while doing so getting to know each other more.

The guys were believable enough together and I liked them, but the mystery was a disappointment. Dull and predictable, sadly for that reason the grade is what it is.
Grade: C+ 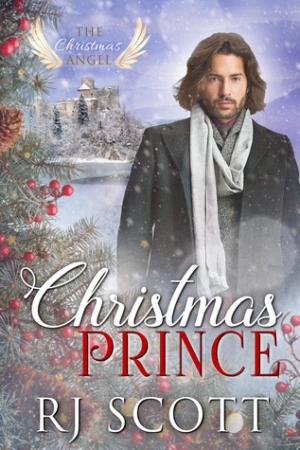 Prince Raphael, the youngest son of the Montaunoit royal family, is the custodian of his country’s history. At a Sotheby’s auction, he outbids Marc on an item he doesn’t even want. Just because he can. Meeting the museum curator turns Raphael’s world upside down, and when lust turns to love he knows he has to change. Can Marc be the one to show Raphael that he doesn’t have to stay the lonely prince forever, and that love is always an option?

Unfortunately the romance in this story did not work for me at all. I understand that the intent was to create a fairy tale for adults – the museum curator gets swept off his feet by the handsome prince, but it completely missed the boat for me.  They meet at the auction where Marc is bidding for the certain historic papers for the British Museum and Rafael bids on those papers too and wins them because he wanted to rattle Marc.  Rafael sounded and acted as an extremely entitled ass in my eyes. Hey what do you do if you are a prince of the small principality and you cannot make the guy interested in you by outbidding him on the papers you don’t really need?

Apparently all one has to do is to create a job of the curator for Marc in order to keep him close and eventually seduce him. You offer the job to the guy whom you want to seduce and then tell him the job doesn’t depend on that? Um, okay.

I mean we do see Marc’s POV and we know he is attracted even when he is annoyed by Rafael, so this is fully consensual and Rafael tells him almost from the very beginning that part of the reasons he offered a job is because he wants him, but still, I could not shake off YUCK feeling even though I know it was not the intention.

I liked the use of the angel. If she is helping lonely men get together, SHOW me what she does not just tell me as the authors in the other two stories in these series did. Here she is actually needed as part of whatever magic takes place in the story.