REVIEW: No Surrender by Shannon Stacey 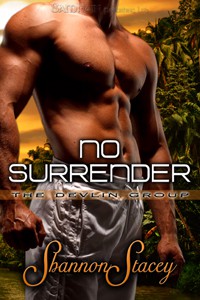 I confess that I haven’t ever read you before.   I thought I had and just decided that while you were a great gun, your books were just not for me.   Then, after seeing two recent releses, Becoming Becky and No Surrender, I thought I ought to give you a try.   I tried Becoming Becky but couldn’t get into it at the time. But then I saw that Keishon, a very picky suspense reader, mentioned she was excited about your Devlin series book, No Surrender.

No Surrender is a fast paced action story that is sort of split in two. While I was reading it, I was instantly reminded of Suzanne Brockmann back in her earlier days when she was writing more romance actions stories than simply action stories.

I hadn’t read any other books in the Devlin Group series and never once felt lost.   I do, however, have the urge to read the entire series now (and plan to buy them this weekend).   The primary focus of the Devlin Group is of Gallagher and Carmen Oliveria.   Gallagher is the number two man at Devlin Group who is primarily responsible for logistics of a mission.   Carmen Oliveria (and her past was a little light on the details) appeared to be a former thief whose speciality is picking locks and being invisible.

Together Gallagher and Carmen are sent to peak through a very bad man’s house in Canada.   The house is supposed to be empty of everyone except for staff but the situation turns ugly when the bad man returns unexpectedly.   Carmen and Gallagher get out a live but are stranded in the mountains of New Hampshire.    The first part of the story is a road romance as the two struggle to survive in the mountains with very few supplies and an attraction that at least Carmen does not want to explore.

Whether it is the adrenaline, the near death experience, or the forced intimacy, Carmen can’t hold out and she and Gallagher enjoy a memorable physical encounter.

The second part of the romance takes place in Matunisia where the Devlin Group sets up camp to remove a hostage.

Carmen and Gallagher are both very competent.   I was also very convinced that these people knew what they were doing.   There is a great scene in which Carmen is stuck with only a .22 and the bad guys are out of range.   Gallagher does something with the pistol to force a greater velocity from the bullet.   It was details like these (whether it was accurate) that made me a believer of the story.    There is a great sense of realism here which rachets up the suspense.

For the most part, I kind of guessed what would happen next.   I thought that the conflicts were signalled a bit strong.   For example, when we first meet Jake Donovan, a member of the Devlin Group, he’s drinking a beer and being despondent over the loss of his best friend who he lost in a rock climbing episode three years before.

There was another tell in a setup scene when the Devlin group first gets to Mutinisia which I thought was overtly obvious as well.    The lack of surprise in the story is the one complaint I had so I was even more grateful that the penultimate moment (assuming you don’t consider the epilogue the final scene) wasn’t what I thought it would be.

The emotional exploration was a bit on the sparse side although I wouldn’t have expected either of the characters to be big mopers. The absence of long expository segments was a relief after I had tried to get through two others that were replete with them.   Gallagher is really the all American boy next door, a very capable and deadly one, but one who had little emotional baggage other than his longing to be with Carmen.

Carmen is more conflicted, having had a bad childhood and a lack of close friends or good relationships.   Her one good thing in life is the Devlin Group and she certainly doesn’t want anything to happen that would affect her position.   She worries, rightfully so, that Gallagher’s feelings for her will prevent her from being part of the group. She worries about what would happen if they would form a bond and then break up.   Her concerns were legitimate and I liked that there was no easy, concrete answer for her. To be with Gallagher would be   a risk.

While I thought that there were a few problems (and thought the two part story was a bit strange), I really liked No Surrender and think that those readers who are looking for a Suzanne Brockmann type of story with more romance, would be pleased with this book. I’m off to get the other Devlin Group books.   B

This book can be purchased on line at various retailers on August 25, 2009. You can read excerpts at Shannon Stacey’s site.