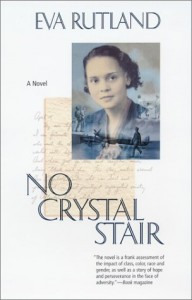 Your book, No Crystal Stair, came to my attention a couple of years ago when I was perusing Library Journal’s best books of the year lists from previous years. Back in 2001, Library Journal designated No Crystal Stair one of the five best romances of 2000. I was intrigued enough by that to hunt down a copy of the book, but it went into my TBR pile and did not emerge from it until I recently picked it up again thanks to Keishon’s TBR challenge.

This month’s assignment from Keishon was to read “Historical romance or fiction or mystery.” I have loads of historical romance as well as some historical fiction and historical mystery in my TBR pile, most of it set during the 19th century. This book stood out from the rest of the pile in two ways: it takes place during the 20th century, and the characters it follows are African Americans who must face obstacles which include Jim Crow and prejudice.

Published by Harlequin’s Mira Books division as general fiction, No Crystal Stair follows one couple, as well as their friends and family members, from the early 1940s through the early 1970s (there is also an epilogue set in 1999). In doing so, the book provides readers with a window to the social changes that took place during those years while telling the story of Ann Elizabeth and Robert Metcalf’s marriage.

The story begins in segregated Atlanta in the spring of 1942, when Ann Elizabeth Carter, a senior at Spelman College, tells her mother, Julia Belle, that she has received a marriage proposal from Dr. Dan Trent. In the upper echelons of black Atlanta society, Dan is considered a great catch, and Julie Belle wants her daughter to marry a doctor, as she herself did. But Ann Elizabeth is not sure that her feelings for Dan are strong enough, and she puts off accepting his proposal.

Later the same day, Ann Elizabeth’s father, Dr. William Randolph Carter, is driving her back to school when he stops at the small black hospital where he practices medicine and hears that he is needed by the Suber family. He takes Ann Elizabeth on his house call. At the Suber house, Dr. Carter and Ann Elizabeth discover that the Subers’ two sons have been severely injured in a fight after being attacked by white boys.

Dr. Carter is still patching up one of the boys when policemen come to arrest them. As politely as he can, Ann Elizabeth’s father asks that the boys not be moved for medical reasons. Fortunately, one of the policemen, Officer Malloy, recognizes Dr. Carter, who delivered the son he secretly shares with the black woman he loves. Malloy tries to persuade his partner to listen to Dr. Carter and consider the possibility that it was the white boys who started the fight. Eventually, the policemen leave without arresting the Suber boys.

“Hush, child, it’s over.” He held her as he’d always held her, lending her reassurance and strength. Yet he had seemed so small, so vulnerable, standing in front of that hulk of a policeman. And he had humbled himself. She’d never seen him in that role before. She knew now that it had been necessary to protect the boys. The fierce pride she felt for her father battled with embarrassment at his humiliation.

For a young black woman in the 1940s, Ann Elizabeth has led a relatively sheltered life, and it is the encounters with bigotry and injustice, large and small, that her mother wants to protect Ann Elizabeth from. She believes that marriage to Dan Trent would allow her daughter to remain protected, at least as much as that is possible for her.

But Ann Elizabeth only likes Dan as a friend, and when her brother Randy, who recently joined the army’s new training program for black pilots, brings an army buddy with him to his sister’s debut, it is almost love at first sight for Ann Elizabeth and Robert Metcalf.

Rob is the son of a widow from Los Angeles. His father, a mechanic, died just as Robert was about to begin high school, and Rob had to take odd jobs to help his mother make ends meet. He attended Fresno State on a football scholarship, and when an Army officer came to Rob’s school to recruit men for the Air Corps’ pilot training program, Rob was bitten by the flying bug.

Robert was rejected by the Army because of his race, but rather than giving up, he tried the Navy and the Marines, and when they too rejected him, he wrote letters to congressmen, senators, and even President Roosevelt. When the Army Air Corps finally decided to accept black men, Rob was among the first to sign up.

After a fast courtship, Ann Elizabeth and Rob marry and she moves into his room at a rooming house on the Negro Air Corps base in Tuskegee. There she has to make do with a much less comfortable living arrangement than what she is used to, but although she feels the privation keenly, Ann Elizabeth never complains.

Ann Elizabeth and Rob’s marriage also brings her brother Randy and her good friend Sadie back together. Randy and Sadie had a romance in high school, but it ended when Randy and Ann Elizabeth’s mother decided that Sadie wasn’t good enough for her son, and that she could get her out of the way… by sending her to nursing school.

Now Sadie is a nurse, but as grateful as she is to Julia Belle for her education, she is still in love with Randy, the first person to make her feel that her dark skin is beautiful. And Randy once again falls for Sadie. He gives her an engagement ring but refuses to marry her before the end of the war.

Meanwhile, World War II is raging and pilots are badly needed, but the men of the Negro Air Corps are forced to sit on the sidelines while the Army tries to decide what to do with them. The pernicious belief that black men can’t pilot as well as white men frustrates Rob, Randy and their fellow Tuskegee pilots, who want to do their part to defend the country.

When the men’s orders finally come, Ann Elizabeth is pregnant. She must say goodbye to her brother and to Rob, and return to her parents’ home in Atlanta, to await news from Europe.

There’s a lot more to Ann Elizabeth and Robert’s story, and while I don’t want to spoil it, I do want to say that the book follows them through the war and post-war years, from segregation and Jim Crow to Civil Rights demonstrations and school integration. Together they experience heartbreak and joy, loss and triumph. At times they are able to overcome discrimination through determination and achieve some of their dreams, while other dreams remain out of their reach due to racism.

Neither Rob nor Ann Elizabeth is perfect, but they are both caring, sympathetic people who are invested in their marriage. Rob is ambitious and stubborn, qualities that don’t always make his life easy but that ultimately serve him well. Ann Elizabeth extends her compassion to people around her, but is less bold and a bit more apprehensive about rocking the boat. You made me care about both of them, even when they were at odds with one another.

The most dramatic part of the book for me was the section set in the 1940s, because that was when the characters faced the greatest obstacles in terms of prejudice. For example, there is a scene in which Rob secretly removes the “WHITE” and “COLORED” signs from the restrooms at the Air Corps base. As I was reading it, I was both thrilled at his courage and terrified that he would get caught and punished.

As the story moved into later decades, the characters still faced dangers, but none that seemed as dramatic as those they faced in the early sections. I think this was the case because one of the book’s aims was to show progress being made over the years. It was a huge relief to see Ann Elizabeth and Rob’s lives become safer, along with those of all minority members in the United States. But at the same time, though the later parts of the book were still enjoyable, I wish that they had resonated with me as deeply as the earlier ones.

I also wish that more time had been spent on Ann Elizabeth and Rob’s courtship, as well as the courtships of some of the other couples we meet in the course of the story. These seemed glossed over. While I enjoyed reading about the main couple’s relationship after the marriage, I would have liked a little more romance leading up to the “I do.”

The way a few of the minor characters who appeared early on, like Officer Malloy, were introduced led me to expect that I would be hearing more about them later on in the book. When these characters finally popped up again, their appearances were so brief that I wondered what the point was. They felt like loose ends to me.

Still, I very much enjoyed the time I spent with Robert and Ann Elizabeth, and I also appreciated that the book took the time to present a balanced view of people of every race and nationality. For example, while Rob was horrified when he saw the concentration camps in Germany, he was also shown kindness by a German woman. It was not the first or last time that his and Ann Elizabeth’s lives were touched by the kindness or courage of people from a variety of backgrounds.

Another thing I enjoyed was the writing style, which was both simple, and at times, evocative. The title of the book comes from a line from a poem by the African American poet Langston Hughes, which Dr. Carter is fond of quoting to his wife and children: “Life for me ain’t been no crystal stair.” I found the entire poem here and thought that it was not only very moving, but that it also encapsulates the themes of the books perfectly.

Robert and Ann Elizabeth’s life was not a crystal stair either, but like the narrator of the poem they kept climbing, and turning corners, and that is what makes normal, everyday people heroic. B-.

This book can be purchased from a second hand seller. The publisher is Mira. The ISBN is 1551666626. No ebook format.